In this article, we will talk about the different recording modes, Object Spy and Object repositories in QTP.

The recording is the most commonly used method to create a test. The basic steps are typically recorded and the test later undergoes improvements in order to suit the needs of the testing process. 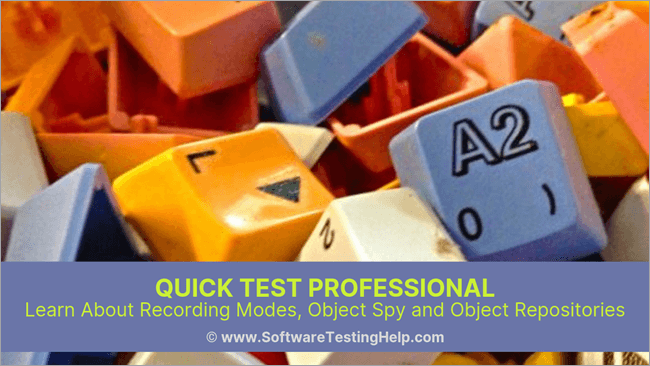 Though only the normal recording mode gets used most of the time, it is important to know the others too, as the knowledge about the same can come handy when the need arises for them.

Normal Recording mode: The default recording method is always the normal mode. In all our previous articles when we say record, we meant the normal mode. So, as we know this method uses the model of Test Objects and Runtime objects to learn and act on the AUT.

Analog recording mode: records the exact mouse and keystrokes that the user performs in relation to either the screen or the AUT window.  The steps that are recorded using this method cannot be edited.

The way this usually gets represented in code is:

One scenario in which this type of recording can be used is when we are trying to capture a signature.

Low-Level Recording mode: This mode records the co-ordinates in the application where the operation is performed, irrespective of whether QTP recognizes the specific Object or Operation.

Some important points to note about these different modes are:

The menu option to change the Recording Mode is: 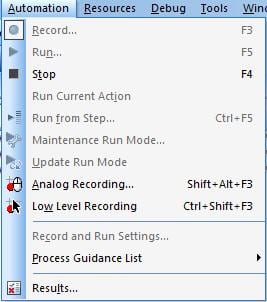 Object Spy is an extremely helpful tool that QTP has to view the properties and operations of an object in the AUT. The prerequisite to using this tool is that the AUT has to be opened. 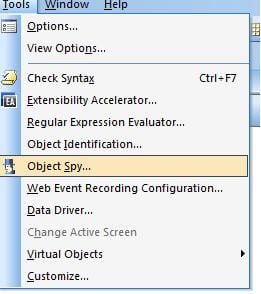 It is also available from the Object repository and Object Repository Manager windows.

When Object Spy is launched, this is how its interface looks: 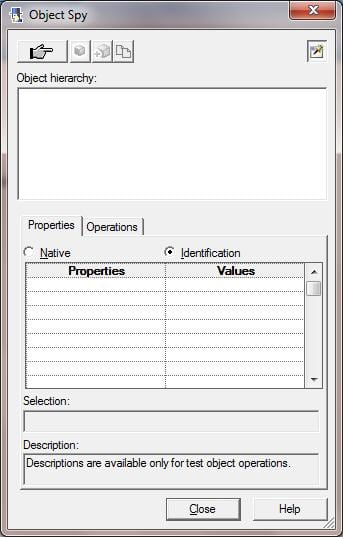 By clicking on the pointy hand you can point to any object whose properties you wish to examine.

This is how it displays the properties: 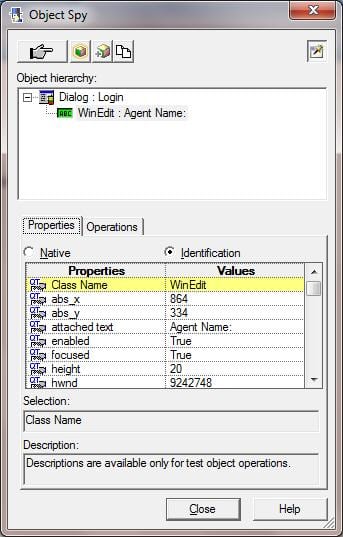 As you can see, it shows all the properties of the object and the corresponding values. It shows the object hierarchy. There is also an ‘Operations’ tab which when clicked displays all the operations that can be performed on the test object. 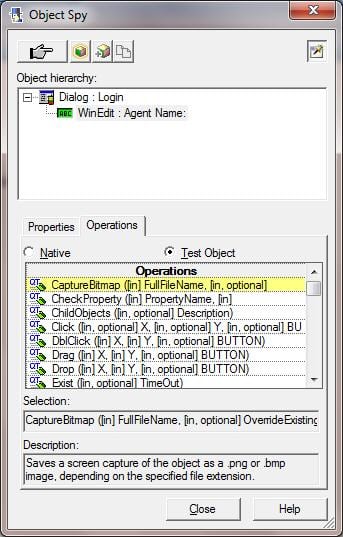 The spy not only displays the properties, but it also has a provision that lets the users add a certain object to the OR.

You can do that by clicking on the OR icon with a + in it.

In one of the previous articles, we talked about how an OR is like a warehouse where all your objects are stored.

OR has the list of Objects that QTP learned during the recording process and the class to which they belong. It stores the set of properties that uniquely identify the Object (description) and also names the object for the sake of identification in our test, based on its most prominent feature.

The objects that are acted upon during record get automatically added to the OR. Alternately, the user can add additional objects on a need basis. This can be done directly from the OR window or from Object Spy.  (Ctrl+R or Resources->Object Repository or click on the icon.)

There are two kinds of Repositories:

Every time a test is created we have seen that a call to Action 1 is the only statement by default. We can add other actions and call them as needed. So, for every action QTP creates its own local repository by default.  It contains the objects that are related to that particular action.

Conversely, the user may decide to use a common repository for multiple actions in which case, this repository is to be associated with the actions and all of them can share the objects that it contains. This can be done using the “Object Repository manager’.

The objects can be exported from a local repository into the shared one to maintain a single location for all the objects.  Also, a shared repository is read-only in the activity level and any changes to it have to be made via ‘Object Repository manager’.

The repository to be used by action has to be specified in the action properties.

How is it done practically is something we will look into using some examples later on.

Some of the important points to note here are:

It goes without saying that having a Shared Object Repository is more efficient as it helps in easy maintenance and you can use one object description across multiple actions.

Here we covered some of the key concepts that will enable us to understand and create better QTP Tests. In my opinion information on Actions, Active screen and a rather impromptu but important password encoder tool are a few more aspects we will have to cover before we move to more advanced topics.