Testing is an essential part of the Software Development Process. A robust and stable software product can be delivered with the use of standard testing methodologies that will help to predict the timeline of the software system.

A software application may turn even more complex with a large number of platforms and devices. More importantly, it is required to ensure whether it meets the specified requirements and can be efficiently installed and operated on the user’s machine or not.

Testing methodologies are the methods that are used to test the functional and non-functional requirements of a Product. Each method has its own defined deliverables to ensure that the expected product is delivered to the customer. 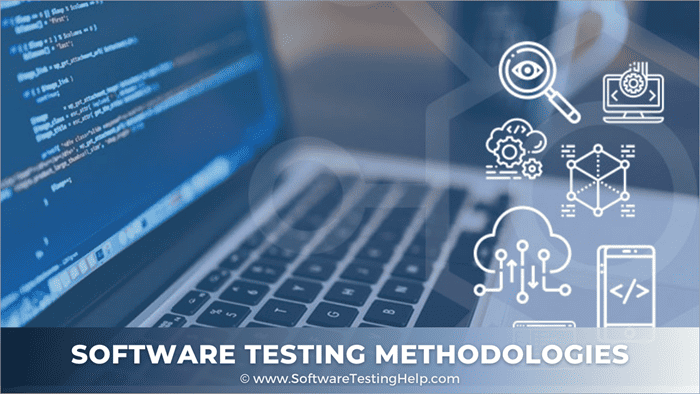 Methodologies can be considered as the set of testing mechanisms used in the software development lifecycle from Unit Testing to System Testing. Selecting an appropriate testing methodology is considered to be the core of the testing process.

With the means of security, compatibility, and usability, a software product should be tested by using the proper testing methodology. Let us learn about these Testing Methodologies in detail-

Functionality is verified by providing the input data and verifying that the output is as expected as in the requirement document. Functionality testing covers the functionality of a product, usability i.e. application or product is easy to use, etc.

Testing is performed in the below order:

Moreover, if the defect is not detected in unit testing, then it could lead to Major and Critical issues at the later stage which indeed would cost high to fix the same and will also take more time than the estimated time.

While doing unit testing if the developer integrates two components to test to save time and the other component is not yet ready, then the developer uses stubs or drivers to perform his testing. If a defect occurs on the integrated system, then it becomes difficult to find the module, because of which the issue has occurred.

A stub is a dummy code that has the same Input parameters as the actual module but has a simplified behavior. Stub follows a top-down integration approach i.e. stub is used when the sub-modules are not developed.

Example: If there are three modules i.e. module X, module Y, module Z. Module X is developed and it calls a function from module Y & Z but modules Y and Z are under development. In this case, the stub of module Y & Z is created to test module X 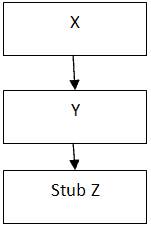 The driver follows the bottom-up integration approach. It is used when the main module is not ready and the other module needs to be tested. In that case, a dummy is created for module X so that Module Y & Z can call the function from Module X. 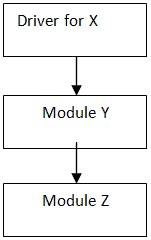 Example: The computer which we use has individual components as a Monitor, Screen, Key Board, Mouse. Once the monitor and keyboard are ready, they should be integrated to verify if the output is as expected. 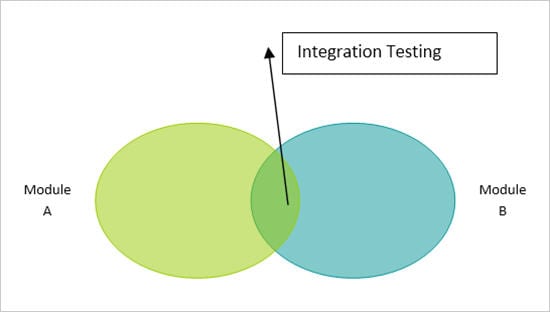 Approaches used in Integration Testing are:

To test module 2 in integration testing when modules 4 & 5 are not developed, stubs are created to test the same in the top-down approach.

In the bottom-up approach, sub-modules are developed and tested first and the whole system is tested.

To test Module C, the Driver of module A is created so that function can be called.

The mixed approach is a combination of both top-down and bottom-up approaches. In the top-down approach, testing can start only when the top modules are developed and the unit tested.

In the Big bang approach, all the modules are integrated into one go and are tested. A drawback of this method is that if any error is detected while testing, it would be difficult to find the error-causing module. Once the defect cause is detected, it will be fixed but it would cost high & will be time-consuming as the defect found is at a later stage.

In system testing, a system as a whole i.e. a completely developed system is tested to find defects. All the modules are integrated to test as a complete system. Scenarios prepared for system testing are run to find the defects.

All the modules of a product are integrated and tested to verify that the built product is as per the customer requirement. End-to-end testing is performed to cover the complete scenarios.

Once the System testing is complete, the Product is ready to be released to the Production environment. But before deployment, the customer’s acceptance and approval are required. The customer verifies whether the product is all that they wanted or not. For this acceptance testing is done.

User Acceptance Testing: Testing is done at the user end wherein the prepared UAT test cases are executed. Replica of the production environment is created for the customer to perform the user acceptance testing.

Example: If Performance testing is not done for new functionality added to the application, when the application goes live it becomes too slow to work with and the customer gets affected with the same.

Performance testing is done to verify if the system meets the non-functional requirement identified in the SRS document. It verifies how the system behaves and performs like response time, throughput, etc.

There are various types of Performance testing done as given below:

Basically, the load is constantly increased on the system by increasing the number of users using the same application at the same time till the time the load reaches its threshold.

Stress testing is done beyond the system’s capacity to check at which point it fails. In this, invalid or illegal inputs are used to test so as to stress the capabilities of a product. Stress is increased on the system by increasing the number of users till the time the application breaks.

Volume testing is done with a huge amount of data to verify the efficiency & response time of the software and also to check for any data loss.

Security testing is one of the important testing methods as security is a crucial aspect of the Product. It is done to verify if the application is secured or not. 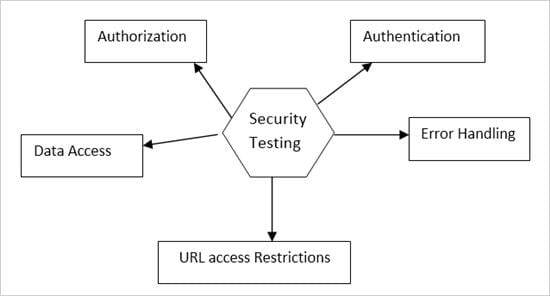 Few examples of what is being tested while performing security testing are:

Usability Testing is done to check how user-friendly the application is. User Interface is checked to verify that it meets the customer requirement. Display screens, messages, navigations, links, orphan pages are a few to name among those that are tested while doing usability testing.

Example: The application might show all the images perfectly in one browser whereas, in another browser, the images are shown distorted. So, it’s important to verify the application on all the browsers and operating systems that the customer has asked for in his requirement.

Installation testing is one of the most important testings as Installation is the very first interaction of the user with the product and it’s important that the user does not face difficulty in installing the same.

The software can be installed via CD, Internet, and network location.

Example: If an installation is done through the Internet, then test cases should be included for:

The Installation of Software requires the use of License keys. Thus different types of licensing are:

The purpose of Uninstallation testing is to verify that uninstalling the product does not cause any errors and all the components are removed.

Uninstallation testing ensures that all the data, executables, and DLL files are removed. Uninstallation of the application is verified by checking the software in Add/Remove programs menu, and through the manual deletion of files.

Documentation testing is done to verify that all the technical/maintenance documents exist and are consistent. If the requirement specifies the types of audience for which a specific manual is required, and it is checked for such compliance.

The white box testing technique is used to examine the program structure and business logic, it validates the code or program of an application. It is also called Clear Box Testing, Glass Box Testing, or Open Box Testing.

The Black Box testing method is used to test the functionality of an application based on the requirement specification. Unlike White Box Testing it does not focus on the internal structure/code of the application.

Let’s have closer look at each Software Development Models with a brief explanation.

The  Waterfall model is the basic life cycle model which was developed by Winston Royce in 1970. This model represents multiple stages or processes in a sequential manner that flows progressively downward.

This approach is useful when requirements are well known, technology is understood and the resources with required expertise are available.

The waterfall model is defined by the following stages: 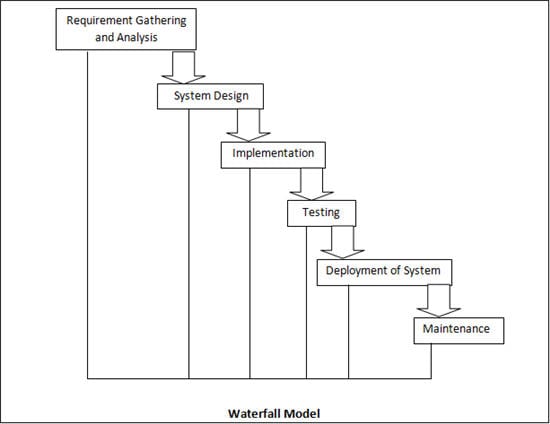 V Model is an extension of the Waterfall Model where the process execution takes place in a sequential style in V-Shape and is also known as the Verification and Validation Model. In this approach, there exists a directly associated testing phase in every single phase of the development cycle.

It has been proven beneficial and cost-efficient than the waterfall model as the testing is performed at each development phase rather than at the end of the development cycle. 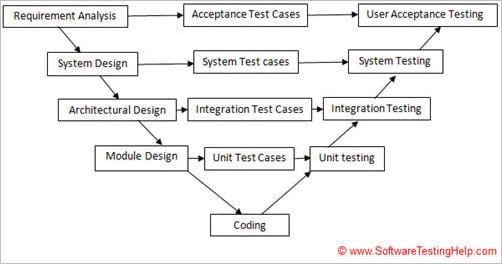 V Model is classified into 3 Phases.

This phase contains the actual coding phase in the development lifecycle. Programming languages should be chosen based on the system and architectural design specified in the previous phase technology platform. Coding is performed according to the standards and guidelines that are pre-defined.

This approach also allows continuous interaction with the customer for their feedback and corrections in the requirements at regular intervals.

The following diagram will help you to understand the Agile Model approach more precisely: 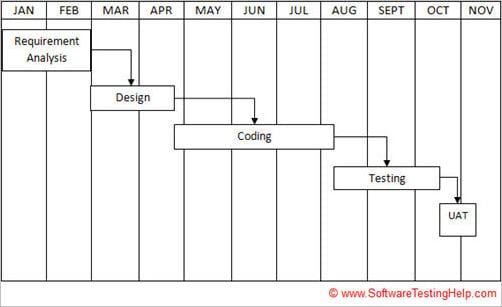 The following image will show the iteration cycle in the Agile Model: 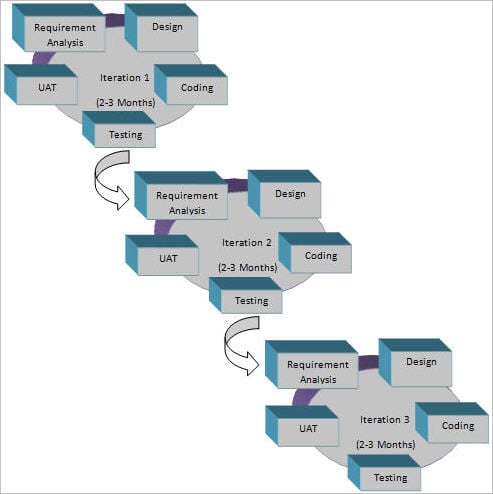 Advantages of the Agile model:

Disadvantages of the Agile model:

The spiral model incorporates an iterative development approach along with the systematic approach of the waterfall model. It is similar to the incremental model and emphasizes Risk Analysis.

1) Planning Phase: In this phase, the requirements are gathered and reviewed to finalize the test case.

3) Engineering Phase: In this phase, the software is developed and tested at the end.

4) Evaluation Phase: This is the last stage where a customer evaluates the output of a project and gives their feedback for either the next spiral or approval. 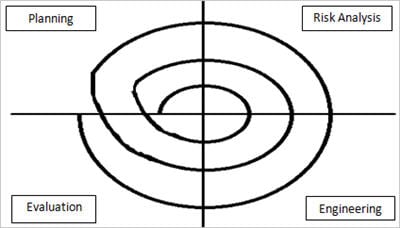 When to use the Spiral model:

Disadvantages of the Spiral model:

Rapid Application Development(RAD) is a type of incremental model. In this approach, components are developed in parallel.

This is a rapid approach and it can give a fast product to the customer to provide feedback.

Phases in RAD are as follows:

The answer to this is not much complex as there is a simple difference between both.

Testing Methodologies are the methods or approaches to testing that includes Unit testing through System Testing.

Testing Strategies is an overview of the key issues that occur in the testing process and is to be taken into consideration by the project manager, a team of developers, and testers.

Software testing methodologies guide the testing of an application in such a way that the product developed is as expected by the customer. They ensure that every bit of a product or application is what the customer has asked for.

Choosing a proper Testing Methodology is the action or set of actions that lie at the core of the testing process. This may even be a versatile activity that changes according to the business requirements and timeline of the software product.

However, one can choose single or even multiple Software Testing Methodologies to have a more flexible and efficient end product that satisfies the customer’s needs and expectations within the desired time.

Being a tester, the topics discussed may be similar to you, but we believe that this tutorial would have helped you learn the basics of Testing.