Enjoy the most flexible UFT tool with its latest features: LeanFT vs UFT

QTP/UFT tool has attained its latest version 12.5 and it is considered as a stable release now. This tool is specially developed for functional and regression testing in the earlier days with some limited features.

But now, I have been really excited about QTP’s (UFT) latest version, just because of its extreme flexibility and GUI changes.

I think QTP is planning to compete with Selenium which is now considered to be the best in the market for website testing. QTP tool is slowly resolving its negative impact by adding significant (essential) features to itself.

In this article, I have extensively briefed about UFT’s additive features and LFT (Lean functional Testing). It will be helpful for those are already working on QTP  to easily adapt to the latest version.

It is available for download, from its native website. Once you start downloading, just join me to know more about its latest features.

Initially, let us start with LFT which is also known as lean functional testing.

LeanFT is absolutely related to UFT version 12.5 because with the help of this bundle (UFT & LFT) it competes with selenium head-on. The key feature of LF

T is, it fits into the usual developer’s field. Hence you can use the same programming languages and the unit-testing frameworks which you used previously.

You can get LFT either as a standalone downloadable package or as the incorporated with UFT.

The installation procedure is similar for both the options. But before that, you should install testing framework [Junit & Nunit], development IDE [VS or eclipse]. There is no separate license for LFT, it comes with the UFT license.

If you have a UFT license then just upgrade it.  With the UFT license, you can enjoy LFT and the API capabilities.

LeanFT combines an open source and hawker based strategy and this strategy is considered as a key differentiating factor to stand up to selenium. Another important factor to be noted is that you can use Java or Selenium framework in LFT.

With these significant features, one may think that LFT may replace UFT. But it is absolutely impossible as these two are established for different reasons and fit under different choices. HP concentrates more on three types of users, DevTesters, Automation test Engineers & Subject Matter Experts.

Who Uses UFT & Who LeanFT?

Given below is the list of users who use UFT and LFT.

LeanFT Bundled With UFT 12.5 And Its Incredible Features

The latest UFT 12.5 is superior to the previous services packs as it comes with a mobile testing capability & latest browser support.

LFT is bundled with UFT 12.5, so it is expected to rock the functional testing world.

Now let’s have a detailed look at the latest functionalities with some of its screenshots for better understanding:

In the latest version 12.5, the Mobile testing capability is expanded to a greater extent. It has been enhanced by many features which are introduced currently.

The feature of Object Spy has been improved drastically in the latest version.

While recording a session, you can now:

You can work with multiple applications at the same time during run or record. To do so, you will have to set the correct record & run setting. The user can also open remote access window.

A modified UFT extension is available for the Firefox users. Earlier, with every new version of Firefox, we had to change the configuration settings. But now this difficulty has been resolved with the new advanced 12.5 version.

This UFT extension is identical across all the versions of Firefox browser. Any Firefox version over 33 is now supported by UFT.

A user can check-in a UFT test in the GIT repository directly from the UFT. And do changes in the local and remote repository with the solution explorer rather than using the windows explorer.

Version control for the UFT scripts is now available with the help of a powerful VCS.

In the latest version, though it is not associated with the current test, the user has the ability to add a functional library as a solution item. It is made common instead of keeping it for a particular test alone.

In UFT 12.5 a user can create automation scripts using LFT with the already existing tools such as visual studio, C#, eclipse etc.

Business process testing in UFT is now made flexible and much easier.

Yes, it is possible with the run-time engine. It does not require the complete installation of the IDE, instead, you can select a run-time engine from the custom setup wizard during installation. This enables you to do the setting changes to run the tests.

The latest version of Firefox and Chrome will be supported in UFT 12.5 and in addition to that some other versions are also supported in this update.

The other versions include:

UFT is now capable of generating HTML based results & reports. It is much lighter and faster than the previous one.

This report contains the following details:

In addition, you can get screen captures and data tables as well. The user can send or export the HTML based reports to the other formats.

An added advantage is that there is no need to install Run results viewer on the receiver’s machine to view the report. This report will not contain the entire functionality, if you want to see everything, you can get it from the below path [Tools => Options => General tab => Run Sessions]

Browser, WebNumber, WebEdit, WebRange, WebFile,  and WebList are the properties that have been aligned to maintain uniformity across the browser types. 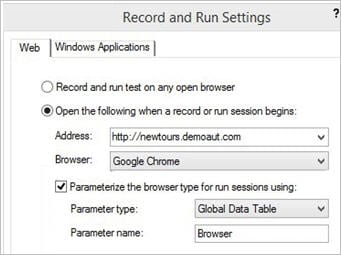 Additional web objects are now supported in browsers like Firefox and Chrome. A tester can choose the browser for recording and executing the session and can also parameterize the browser.

Now a user can add the parameter value directly in the keyword view instead of entering in the property pane. Test object hierarchy is made simple so that you can view all the added steps in the action easily.

A new tool-tip is introduced in the parameters sections as well.

I hope that this article would guide for any beginner to get started easily on UFT Developer i.e LeanFT. I am sure that you will enjoy its new and improved features and these features may, in turn, rock the functional testing world tremendously in the future.