Sikuli follows an image-based technique for interacting with elements on the screen.

Sikuli is a third-party tool that uses image recognition to identify and control UI components.

This is useful when there is no source code/internal code available for the UI/Web Element in the application. The core of Sikuli Script is written in Java. So, we can use Sikuli Script as a standard JAVA library in our project.

=> Take A Look At The Sikuli Beginners Guide Here. 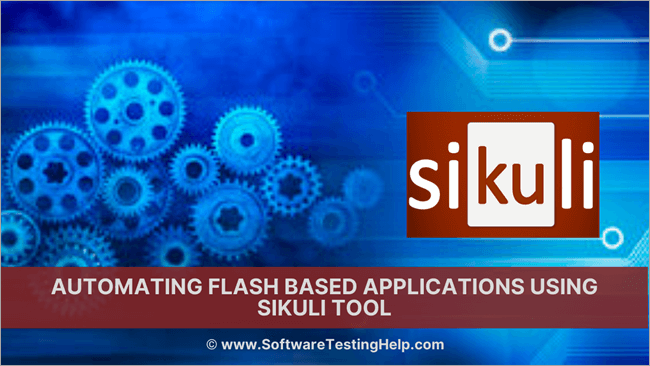 Here is a video tutorial:

Let us take an example. We are going to automate a Flash game using Sikuli. The above-listed steps are explained in detail below:

#1) Take snapshots of all elements to interact with.

Take Snapshots of all the elements we would be interacting with and maintain in a folder.

Generally, to interact with an element in Selenium, we use attributes like id, className or XPath to identify. But in cases like Flash applications, those properties are not mentioned in the HTML document since the flash application as a whole is considered as an element, as shown in the image.

In our case, the application is GameGirly and we will select a flash game called ‘Audrey’s Mood Swing’ to automate.

So, we will be using images in this case in order to recognize elements to perform actions on them. Since we are using the image recognition technique, so in order to identify elements in the applications, snapshots are required.

Snapshots of all elements that we would be interacting with are saved in a folder as below: 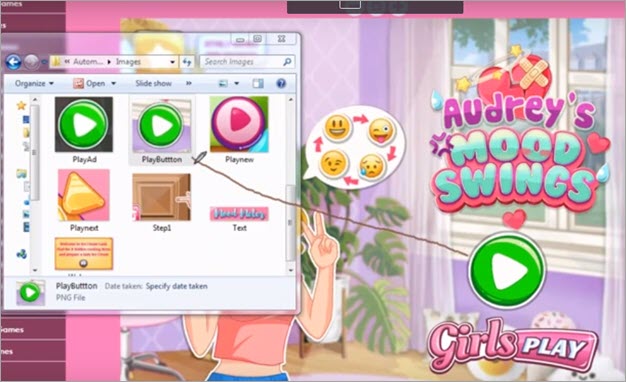 Screen class is the main class for all the functions provided by Sikuli. The Screen is the class that holds all predefined methods for common actions like click, double-click, providing input to a text box, hover, etc.

Object  ‘screen’  – holds the instance of the entire active screen.
Using the object, I can call its methods to perform actions on that current screen.

screen.click(“image.jpg”); – This method is used to click on an element on the screen using the image name as the parameter.

screen.doubleClick(“image.jpg “); – This method is used to double click on an element. It accepts the image name as the parameter.

screen.type(“image.jpg “,”abc”); – This method is used to provide input value to an element. It accepts the image name and text to be sent as parameters.

screen.hover(“image.jpg “); – This method is used to hover over an element. It accepts the image name as the parameter.

screen.exists(“image.jpg”) – This method verifies if the match of the image is present on the screen.

screen.dragDrop (“image1.jpg”,”image2.jpg”) – This method drags and drops the image from one place to another.

#3) Use Class ‘Pattern’ to define the image

Pattern class is used to match the image file with additional attributes to uniquely identify the element on the screen. It takes the path of the image as a parameter.

Object ‘playButton’ holds the match of the image which we would be looking for in the application.

The test steps are to :

The first action is a click, then our line of code will be as below:

This performs the click action on the currently active screen.

But we are required to click on an element. So, it is necessary to pass the element’s reference in the parenthesis of click () as below:

Likewise, each image has to be defined using Pattern class and can be used for various actions.

Any application can be automated by capturing images and interacting with them. This tool can automate almost anything that you view on your desktop/mobile device.

We hope you enjoyed the tutorial and are ready to try the Sikuli tool.