Released in the early days of the 2000s, Selenium’s popularity in the testing community has raised steadily, thereby making it the number one choice for web-based application automation.

Despite its biggest advantages being the wide adoption and strong support from the community, Selenium users normally face the challenges of building up a functional testing framework and maintaining it to drive value over time.

This tutorial will walk you through the advantages and disadvantages of testing with Selenium WebDriver along with its best alternative solution in the market. 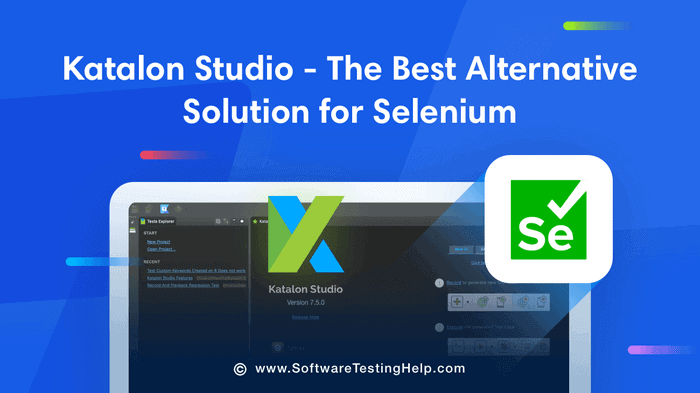 If you are comfortable with building up a framework from scratch with advanced programming skills, then Selenium would be a powerful tool to work with.

If your team consists of people with different testing/programming levels and looks for an all-in-one solution for Web, Mobile, API, and Desktop app testing, then Katalon Studio is the best fit for you.

Besides, Katalon Studio now supports migrating Selenium tests to its ecosystem without the users having to start from scratch. The migration allows them to continue developing the test scripts while leveraging Katalon’s codeless testing capabilities.

The Nature Of Testing With Selenium

Selenium is a robust and developer-friendly application. The tool is made for those with strong coding backgrounds and is capable of exploiting what programming has to offer.

QA professionals tend to focus more on what they do best i.e. testing and detecting bugs. Teams are spending fewer resources on coding and programming to shift their focus on the assurance of product quality and performance.

That trend explains well for the emergence of codeless testing tools in recent years. These tools are comprehensive and robust for different testing needs, without any requirements for programming expertise.

All In One Solution For Web, Mobile, API, Desktop App Testing Is A Must

The new demands from the users and the industry have pushed businesses to research and develop their products on more devices and platforms – from the web, mobile, to desktop applications thereby indicating how test coverage is becoming more important than ever.

Software testing tools are catching up with this trend, by providing an all-in-one solution for testing on different platforms and devices. In the bottom line, an all-in-one testing solution saves time, effort, and resources for both the team as well as the business.

For the software development domain, the two trends DevOps and Agile that call for more out-of-the-box integration capabilities to support collaboration between team members are on the rise.

The CI/CD process is the optimal solution for the teams to move faster and develop more seamlessly while retaining the product quality throughout the different stages of development. Thus, the capability to integrate seamlessly with different technologies is in high priority.

Katalon is one of the leading solution providers in the test automation industry. The Katalon ecosystem consists of Katalon Studio, Katalon Runtime Engine, Katalon Recorder, and Katalon TestOps.

Its test automation tool Katalon Studio has been Gartner Customer’s Choice for two years in a row (2019 and 2020). Since its release in 2016, Katalon Studio is emerging as the prominent alternative solution for Selenium.

Developed as an all-in-one solution for Web, Mobile, API, and Desktop app testing for teams at any level, the tool is quickly trusted by more than 65,000 companies worldwide – thanks to its codeless testing capabilities and scalable nature.

Katalon Studio is widely approved as the best Selenium Alternatives for many reasons and some of them are mentioned below.

Katalon Studio supports testing on all platforms and operating systems, ranging from Windows, macOS, Linux, to Android and iOS for mobile application testing. Users can also use Katalon Studio to automate web, API, mobile, and desktop applications – all in a lightweight, downloadable package.

Being built on top of Selenium and Appium, Katalon Studio not only offers similar functionalities in more simplified user experience for its end-users, but it also provides enterprise-centralized features for the growing teams with different automation purposes.

Getting started with automated testing using Katalon Studio should not be a complicated process, thanks to its user-friendly interface and productive IDE. It also has a host of built-in features to enable ease of use and a short learning curve for the new users.

Without having to apply complex programming, Katalon users are able to exploit all the capabilities of test automation within a short amount of time. Some of its useful built-in features are Object spying, Recording utility, Built-in and custom keywords, Data-driven testing, Auto-waiting, and Auto-healing.

For scaling projects, testers with programming skills can leverage Katalon’s scripting mode to take automation to the next level. The tool’s built-in Object spying, Object refactoring, Code completion, and In-context Reference are useful for Test experts to extend and customize automation even more.

One of the most notable features of Katalon is its wide support for integrations. Hailed as the most collaborative platform in the industry, Katalon users can integrate with other test management tools like Jira, Jenkins, qTest.

For CI/CD applications, it provides native plugins to connect with tools like CircleCI, Azure DevOps, and Bamboo. For those who perform testing on the cloud or virtual machines, they can integrate Katalon with SauceLabs, Kobiton, or BrowserStack without any struggle.

In terms of reporting and analytics, Katalon TestOps is a thriving product built with AI technology. Connected with Katalon Studio, the test data is automatically pushed to TestOps for smart analytics of performance, thereby generating feedback faster for Agile teams.

In its recent version update, Katalon Studio has started to support the migration of Selenium test scripts – thereby making the migration process even easier.

According to the State of Open Source Testing Report, the two most popular frameworks for testing with Selenium include TestNG and JUnit, both of which are supported to migrate seamlessly to Katalon Studio in just 3 simple steps.

After the migration, the Selenium test scripts can continue to be developed using Katalon’s dynamic continuous testing IDE and migrated back to Selenium if needed.

Although Katalon Studio effectively simplifies testing with its codeless capabilities, we believe Selenium still has its lead in the development of web-based application testing. Katalon is able to provide a complete, robust testing experience throughout the SDLC; it is yet a relatively young product with lots of room to grow.

We hope this tutorial would have been helpful for you to discover the best alternative automation solution in the market for 2021. We will keep you updated with the latest developments in the codeless testing tools market and suggest you with an even better solution that it should emerge.

Have You Tried Katalon Before? If No… Are You Ready To Give It A Try Now?