A detailed comparison between PostgreSQL vs MySQL based on parameters like performance, supported platforms, governance, security, etc:

In this tutorial, we will discuss in detail the two major RDBMS systems: PostgreSQL and MySQL. These systems are widely preferred for the development of various types of applications.

We will be covering a list of features for each of them to compare them so that it can help you in selecting the correct RDBMS system as per your need.

There is a good amount of community support available for both of the systems which make them preferred databases. 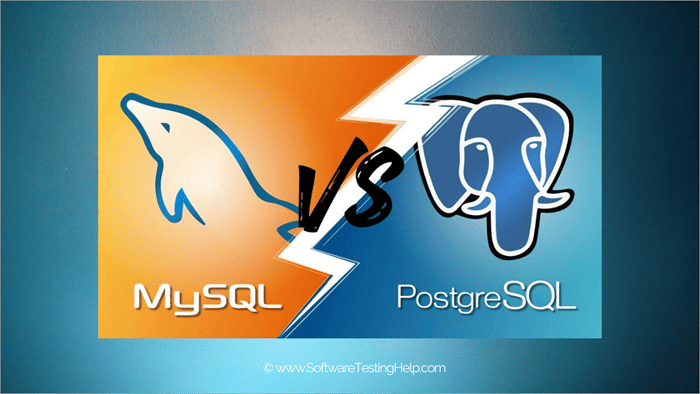 PostgreSQL is an open-source system and is believed to be the most SQL compliant system. It was developed as an open-source project and dates back more than 30 years. It is well known for its extensibility and compliance with different standards. It is preferred for performing complex operations.

Due to the underlying technology on which it is built, it is also preferred for high-volume data operations. It is also in compliance with ACID properties (Atomicity, Consistency, Isolation, Durability). The muti-version concurrency control method used by PostgreSQL enables it to perform many concurrent writes and read transactions efficiently.

The capability of handling simultaneous multiple tasks with great efficiency has made it a preferred choice of many business giants such as Uber, Netflix, Instagram, Reddit, Spotify, etc. The complete list of businesses that uses PostgreSQL is mentioned here.

It is supported by an active and strong developer community. Also, there are many third-party tools and libraries available for PostgreSQL that makes working with it simpler. PostgreSQL is maintained by the PostgreSQL Global Development Group.

Just like PostgreSQL, MySQL is also an open-source database platform, however, MySQL is a large-scale database, a widely used one, and also the most trusted one. MySQL is backed by Oracle and has good support for third-party tools (a few of the tools which can be thought of are MySQL Workbench, dbForge Studio, etc.).

This support of third-party GUI tools makes it easy to use. Anybody new to this database can refer to the vast number of tutorials and resources to start learning and using it. There are some good security features, along with platform independence, compliance to ACID principles, high flexibility, great support, and ease of access which also makes it a preferred choice for web applications.

MySQL is maintained by Oracle Corporation. It is also used by many well-known companies across various industries to support their database needs. A few of them are 3M, Apple, Boeing, Dell, Dropbox, Cisco Systems, Broadcom, eBay, FedEx, Facebook, etc. The complete list of businesses using MySQL can be found here.

We will now discuss some of the features of both systems. Though there might be a large set of features that shall be common across both of them, it finally is up to the specific requirements which shall help in narrowing down a particular choice.

Let us take a look at some of the generic parameters of comparison.

The future of any product, tool, or program is also dependent on its governance model. Each type of governance model has unique benefits that may make a system more powerful.

Each RDBMS uses SQL for its use with certain variations in it to differentiate itself from any other system. The SQL standard compliance is a set of regulations that must be adhered to by a database while implementing the SQL standards. The complete set of SQL standards are listed and can be found here.

The success of any system depends on the wide variety of platforms/operating systems that it can support. Below is the list of Operating Systems/Platforms which are supported by the databases.

The security measures implemented in any database should be strong to protect the system from threats and different types of breach attacks. It also impacts its reliability and preferentiality. It is one of the topmost characteristics that should be taken into consideration while selecting a database for your needs.

Let us take a look at how the security measures are implemented for both the systems.

This can be done for various reasons such as backup creation, load distribution, quick retrieval, legal compliances, data analysis which might execute long-running and expensive queries and thus hampering the database performance, batch job execution, etc.

There are different ways to do replication. Let us explore how it is done for these systems.

Usually, coding standards followed by the database systems are SQL-based however as we have discussed above, each system shall have a variation of it. Below are some of the key differences in terms of coding in each system.

PostgreSQL queries are in almost all cases and are exactly similar to MySQL queries. Let us go through a few of the examples and comparisons of a SELECT query, an INSERT query, and an UPDATE query. We will use a reference to the “Bank” table to check out the differences.

For any open-source system, the presence and contribution of community support are very much significant. It is because of these contributions that there can be continuous improvements in the systems. The improvements can be to the existing features of the system or maybe an addition of the new features as per the current trends or market needs.

The developer community with its inventive ways and commitment ensures that the systems remain the most advanced along with all the latest features.

Q #1) What is the advantage of PostgreSQL over MySQL?

Answer: PostgreSQL is well known for its extensibility and compliance with different standards. It is preferred for performing complex operations.

Q #2) What is the advantage of MySQL over PostgreSQL?

Answer: MySQL is a large-scale database, a widely used one, and also the most trusted one.

Q #3) Does PostgreSQL have any limit for database size?

Answer: No, there is no limit to the maximum size that a database can have in PostgreSQL. It is unlimited.

Answer: Yes, PostgreSQL is free to use. The license is similar to an MIT-style license. It is free even for commercial purposes.

Answer: The license of MySQL is GNU – General Public License with multiple proprietary agreements depending on the version. Hence there are certain paid versions available for commercial use

Q #6) In terms of DB Ranking, which is better? PostgreSQL or MySQL.

Q #7) Is PostgreSQL more compliant to SQL Conformity than MySQL?

Answer: Yes. PostgreSQL complies with 150+ SQL standards i.e. highest as compared to MySQL. Whereas, MySQL is only a Partial Complaint.

Thus, we have discussed many features of both the RDBMS systems. As we can see that along with the differences as new versions come in, many similarities are coming up. Both of the systems have their pros and cons and at last, it depends on the specific requirements.

We hope that this article PostgreSQL vs MySQL has helped you understand the difference between both systems along with the advantages that they have over each other.