Get Ready to Learn the Differences Between SQL Vs MySQL Vs SQL Server:

In this article, we will discuss the differences between SQL and MySQL.

Most of us will have a basic idea of SQL and MySQL, but in order to bring everyone on the same page, let us first understand what SQL is and what MySQL is. 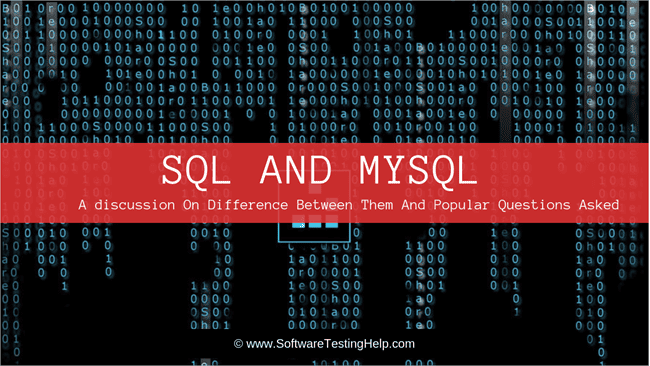 It is mainly useful for handling structured data where relations exist between various data entities and variables. SQL offers the advantage of retrieving multiple records through a single command. It also removes the requirement to specify how to reach a record.

As SQL is specific to interacting with relational databases, it falls in the category of DSL (Domain Specific Languages).

SQL is comprised of many types of statements which are classed as SQL sub-languages:

The above image is an example of a typical SQL query comprised of different clauses, expressions, predicates, and statement.

SQL is a 4th generation programming language which is multi-paradigm in nature. It is a declarative language and also contains procedural elements. It was initially released in the year 1986 and since then it became the most widely used database language. The latest version of SQL is SQL 2016.

SQL follows the ISO/IEC 9075 standard. However, in spite of the existence of the standards, SQL code is not completely portable among various database systems without adjustments.

Having had enough walkthrough over SQL, let us move our discussion towards understanding what MySQL is.

MySQL is an open source RDBMS developed by MySQL AB (now Oracle Corporation) in 1995. Its latest stable release of version 8.0.15 happened in February 2019.

MySQL is a combination of two words – ‘My’ and ‘SQL’. ‘My’ is the name of one of the co-founders Michael Widenius’s daughter and ‘SQL’ stands for Structured Query Language, as you all know.

MySQL offers dual licensing distribution. It is a free and open source software under GPLv2 and is also under many proprietary licenses. MySQL is written in C and C++ languages. It supports Linux, Solaris, macOS, Windows and FreeBSD operating systems.

Given above is the screenshot of default MySQL command line.

MySQL is a component of LAMP(an acronym for Linux, Apache, MySQL, Perl/PHP/Python) web service stack. It is employed in many database-driven web apps like Drupal, Joomla, WordPress, etc. A lot of popular websites including Google, Facebook, Twitter also use MySQL.

Having had the basic understanding of SQL and MySQL, by now you must have understood the basic difference between the two – SQL is a query language whereas MySQL is a database management system.

Let’s see the differences between these two in detail.

Difference Between SQL and MySQL in Table Format 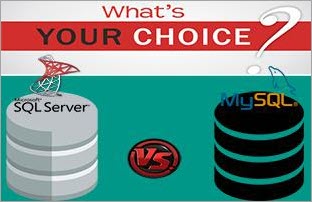 Difference Between SQL and MySQL Commands

Under this topic, we will be discussing the differences between MS SQL Server commands and MySQL commands. There are some variations in the commonly used SQL code in both of these relational database management systems.

For high-end applications, both MYSQL and SQL Server offer a similar level of speed and performance. Both have the capacity to host several databases on one server. They make use of indexes to sort data and accelerate performance.

A few years ago, IJARCCE (International Journal of Advanced Research in Computer and Communication Engineering) published a comparative performance analysis done between MySQL and SQL Server.

Different SELECT, INSERT, DELETE and UPDATE queries were executed on both the RDBMS on Windows system and their execution time was recorded. It was concluded that SQL Server offers better performance than MySQL in terms of response time. Except for the INSERT queries, SQL Server consistently took lesser time for all the other test cases as against MySQL.

The most significant difference between the two was seen in terms of SELECT statements. For 3000 rows SELECT statement, MySQL took almost 3 times of the time taken by the SQL Server.

You can have a look at the below comparison charts:

Averages for a non-conditional SELECT query 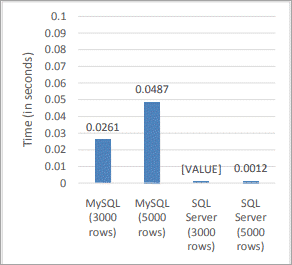 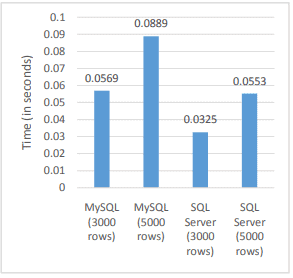 Averages for SELECT query with a JOIN 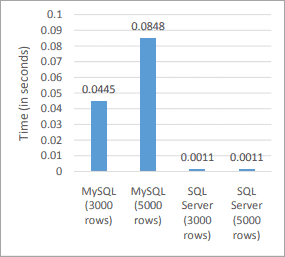 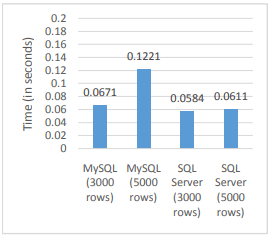 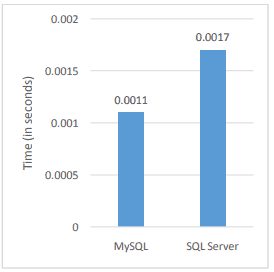 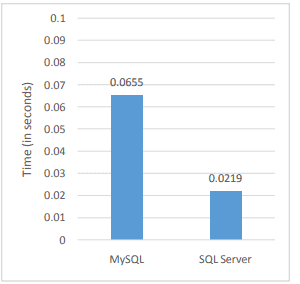 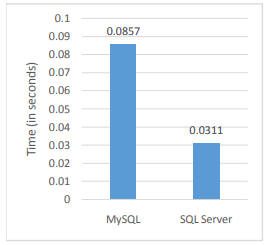 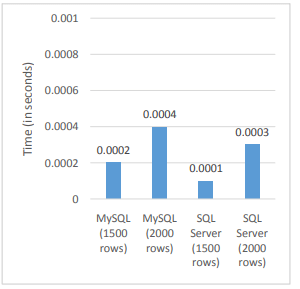 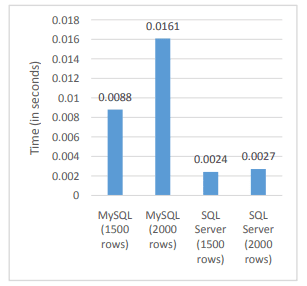 Which is Better – MySQL or SQL Server?

While thinking about which one is better out of MySQL and Microsoft SQL Server, it will depend upon your use cases, budget and perspective. Both are effective in organizing your data and they make it readily accessible through a user interface.

Both the technologies work on the concept of storing data as per schema (table storage). MySQL is inclined more towards selecting the data to facilitate data display, update and save the data again. It is a bit weaker than SQL Server in terms of data insertion and deletion.

However, it’s a great choice for data storage and referencing data. Also, MySQL is not so much rich in terms of development functions and capabilities.

Considering the support, the respective vendors for both the systems provide support in paid as well as free form. As MYSQL is now owned by Oracle, it offers support through technical assistance and Virtual MySQL DBA assistant.

Then again, Microsoft provides solid assistance over its SQL database and cloud storage. It offers a free assistant called SSMA (SQL Server Migration Assistant) which makes it simple and easy to migrate the data from other DBMS like Oracle, MySQL, Microsoft Access and Sybase to SQL Server.

Moreover, MS SQL Server offers ETL functionality which is not there in MySQL. Overall, as per my perspective, SQL server is better than MySQL, but it is more expensive because of its amazing features.

If you are a large enterprise with massive data and concerned about speed, security and power, and most importantly if you have enough budget, then I would suggest going with SQL Server. For individual users and small to medium-sized companies where the amount of data and work required is not that massive, you can go with MySQL.

Again, Microsoft offers SQL server express to cater to the needs of a small organization. The express edition is also free. Thus, SQL server can serve all type of needs. But, MySQL can handle only up to medium level enterprise and where you need to optimize expenditure.

Hence, the choice will depend upon your requirements.

Now we will address some common questions that people have about SQL vs MySQL.

Answer: From this article, you must have already got the answer to this. No, MySQL is not the same as SQL server. Both of these are relational database management systems offered by different vendors. They differ in terms of use cases, licensing, pricing, features, pros, cons, etc.

Q #2) What is the difference between SQL and MS SQL?

Answer: The main difference between SQL and MS SQL is that SQL is a query language that is used in relation databases whereas MS SQL Server is itself a relational database management system (RDBMS) developed by Microsoft.

A query language is basically used for retrieval and modification of information stored in databases. A DBMS is a software that is used to manage the database.

Basically, it’s a collection of programs, features, and capabilities that allow you to interact with the database so as to perform tasks related to data definition, data updating, data retrieval, and user administration. A RDBMS is a database management system with row-based table structure.

Most of the commercial RDBMS use SQL to interact with the database.

Answer: Yes, SQL Server and MySQL can coexist as they are totally separate entities. Both are irrelevant to each other and communicate on different ports. The default port for MySQL is 3306 and the default ports for SQL Server are 1433 & 1434. Thus, there would be no issues for running both of them on the same machine.

The only thing at which you will have to pay attention would be performance issues while running both. It is indeed crucial to define a detailed IO profile and resource usage per database server.

However, as MS SQL works best on the windows server, I would suggest that if you are running both MS SQL and MySQL on the same server, then use Windows Server.

Another recommendation (in case if you want to use both MySQL and SQL Server) is that you can virtualize MySQL instead of adding it to another server, particularly if it’s a production server and this, in turn, makes troubleshooting and removal very easy.

Answer: It depends upon which type of task you are performing and what your workload is. In this article, we have already seen in the performance comparison section that SQL Server worked faster than MySQL for DELETE, UPDATE, and SELECT queries. For the INSERT operations, MySQL worked faster than SQL Server.

For transaction processing, MySQL is fast. With the help of its InnoDB storage engine, MySQL can handle high concurrency for transactions. However, MySQL struggles with reporting workloads, mainly when there are queries that need to join large tables.

For the mixed type of workloads, Microsoft SQL Server would be a better choice as it can outdo in a few areas where MySQL has certain limitations.

Q #5) What is the difference between Oracle SQL and MySQL?

Answer: Both Oracle SQL and MySQL are owned by the same company i.e. Oracle corporation. Both are the most popularly used database management systems in today’s market. However, there are many significant differences between Oracle and MySQL.

MySQL is a relational database management system (RDBMS), that supports only relational data models (data stored in the form of tables having rows & columns and use primary keys & foreign keys to establish a relationship with each other) and it is open-source too.

On the other hand, Oracle is a multi-model database having just one, integrated backend. It has the capability to support many types of data models including document, graph, relational and key-value.

There are several other differences as well between Oracle and MySQL. This includes the differences in terms of indexing, queries, deployment, replication, security, data migration, community support, maintenance, etc.

Oracle Corporation also provides detailed official documentation regarding the differences between MySQL and Oracle. You can click here to view the same.

Just like MySQL, another widely used RDBMS is SQL Server. We further switched our discussion towards comparing MySQL and SQL Server in detail. Both RDBMSes have many differences in terms of their licensing, features, performance, pricing, use cases, etc.

While discussing which one is better among these two, I would suggest SQL Server (though it is costlier than MySQL), but again the selection would depend upon your requirements and budget. Hence, choose carefully after analyzing your needs.

Hope it was a useful read for you to clear your doubts and queries regarding SQL vs MySQL or SQL Server vs MySQL.