This Tutorial will Explain what is Database Normalization and various Normal Forms like 1NF 2NF 3NF and BCNF With SQL Code Examples:

The main purpose of applying the normalization technique is to reduce the redundancy and dependency of data. Normalization helps us to break down large tables into multiple small tables by defining a logical relationship between those tables. 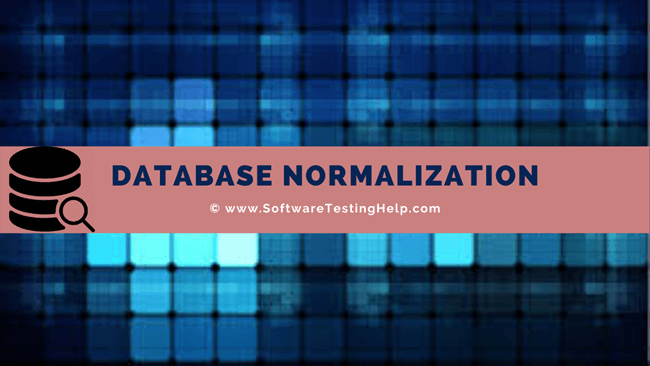 What Is Database Normalization?

Database normalization or SQL normalization helps us to group related data in one single table. Any attributive data or indirectly related data are put in different tables and these tables are connected with a logical relationship between parent and child tables.

In 1970, Edgar F. Codd came up with the concept of normalization. He shared a paper named “A Relational Model of Data for Large Shared Banks” in which he proposed “First Normal Form (1NF)”.

DBMS Normalization has the following disadvantages:

Before we proceed further, let’s understand the following terms:

Following is how our Employees and Department table would have looked if in first normal form (1NF):

Here, all the columns of both Employees and Department tables have been clubbed into one and there is no need of connecting columns, like deptNum, as all data is available in one place.

But a table like this with all the required columns in it, would not only be difficult to manage but also difficult to perform operations on and also inefficient from the storage point of view.

Following is an example of how the employees and department table would look like:

Here, we can observe that we have split the table in 1NF form into three different tables. the Employees table is an entity about all the employees of a company and its attributes describe the properties of each employee. The primary key for this table is empNum.

Similarly, the Departments table is an entity about all the departments in a company and its attributes describe the properties of each department. The primary key for this table is the deptNum.

If the user wants an output similar to the one, we had in 1NF, then the user has to join all the three tables, using the primary keys.

A sample query would look as shown below:

Let’s understand non-transitive dependency, with the help of the following example.

Say a table named, Customer has the below columns:

In order to fix this issue, we need to remove the transitive dependency that could be done by creating another table, say, CustZIP table that holds two columns i.e. CustomerZIP (as Primary Key) and CustomerCity.

By definition, the table is considered Boyce-Codd Normal Form, if it’s already in the Third Normal Form and for every functional dependency between A and B, A should be a super key.

This definition sounds a bit complicated. Let’s try to break it to understand it better.

Let’s consider the following scenario to understand when there is a problem with Third Normal Form and how does Boyce-Codd Normal Form comes to rescue.

In this case, empNum and deptName are super keys, which implies that deptName is a prime attribute. Based on these two columns, we can identify every single row uniquely.

Also, the deptName depends on deptHead, which implies that deptHead is a non-prime attribute. This criterion disqualifies the table from being part of BCNF.

To solve this we will break the table into three different tables as mentioned below:

By definition, a table is in Fourth Normal Form, if it does not have two or more, independent data describing the relevant entity.

A table can be considered in Fifth Normal Form only if it satisfies the conditions for Fourth Normal Form and can be broken down into multiple tables without loss of any data.

Q #1) What is Normalization in a Database?

Answer: Database Normalization is a design technique. Using this we can design or re-design schemas in the database to reduce redundant data and the dependency of data by breaking the data into smaller and more relevant tables.

Q #2) What are the different types of Normalization?

Answer: Following are the different types of normalization techniques that can be employed to design database schemas:

Q #3) What is the Purpose of Normalization?

Answer: The primary purpose of the normalization is to reduce the data redundancy i.e. the data should only be stored once. This is to avoid any data anomalies that could arise when we attempt to store the same data in two different tables, but changes are applied only to one and not to the other.

Q #4) What is Denormalization?

Answer: Denormalization is a technique to increase the performance of the database. This technique adds redundant data to the database, contrary to the normalized database that removes the redundancy of the data.

This is done in huge databases where executing a JOIN to get data from multiple tables is an expensive affair. Thus, redundant data are stored in multiple tables to avoid JOIN operations.

So far, we have all gone through three database normalization forms.

Theoretically, there are higher forms of database normalizations like Boyce-Codd Normal Form, 4NF, 5NF. However, 3NF is the widely used normalization form in the production databases.