In the previous tutorial of Data Warehouse Guide, of Complete ORACLE Series, we have learned about Oracle data Warehouse with benefits, architecture, risks, and comparison with the OLTP system.

As we are moving towards digitization, industries are now focused on building web applications to support commercialization. These applications are mostly database-driven which provides real-time information to users in a dynamic way.

To handle this vital data, Oracle has come up with certain database development techniques that can make web development easy and secure. 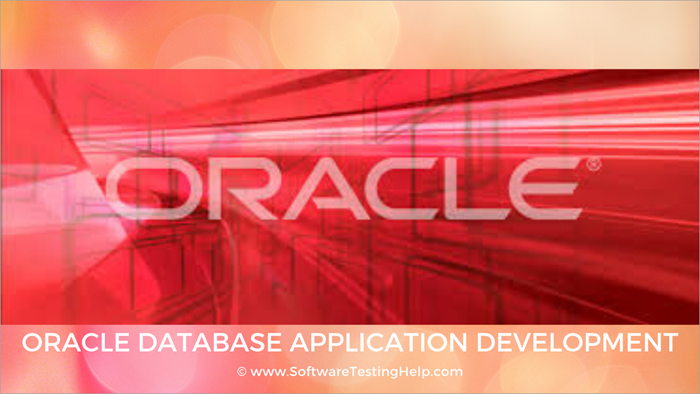 In this article, we will understand the features offered by Oracle Database that facilitate application development.

To perform certain tasks, it acts as an interface to the database, and statements become the instructions sent to DB. These statements provide users with the capability to control data within a database.

Users can access databases indirectly too using different Oracle provided tools or through program applications, provided access permissions are there. But these applications or tools must use SQL statements only at the back end while putting user requests to the database.

With the help of this language, the user can perform a variety of operations as enlisted below:

As SQL is capable of managing data, learning this language is not only necessary for database developers but it supports other job profiles as well like, database administrators, quality analysts, architects, and subscribers.

There are various extensions to SQL language available like Java, PL/SQL, etc. which have added the procedural and object-oriented programmability concepts to SQL.

In the last four decades, there had been a lot of advancement in the field of data processing and many new techniques have been introduced in the market. SQL still managed to survive during this period and eventually evolved as improved technology.

Now, why SQL is so compelling? Why is it still most preferable and one of the successful data processing technology?

The enduring success of SQL is the outcome of the factors enlisted below:

Data is being collected for analysis purposes and this analysis can be framed around a dataset or multiple data rows rather than a single row of data. Certain rules, known as Relational Algebra, have been defined for governing the query construction and execution.

It consists of 4 operators:

Oracle database has a rich set of techniques for SQL optimization. SQL Query Optimizer determines the most effective and efficient method for statement execution by generating the best execution plan.

SQL stayed relevant in the market over the decades due to continuous evolvement in various areas. It was throughout enhanced with the features which are mentioned below.

In1986, SQL language became standard of ANSI and from then onwards it managed to evolve and emerge with many new versions through all those years. Standardization helped SQL in,

As we have read earlier, SQL is one of the set-oriented languages developed to access data stored in a relational database. Any applications built on the top of Oracle Database would require SQL statements only, to be executed to access the database contents.

But being a non-procedural language, SQL is not sufficient to implement an end to end business logic for any application and hence, PL/SQL is introduced.

In PL/SQL, PL stands for Procedural Language while SQL stands for Structured Query Language. PL/SQL is an extension of SQL language supporting functionalities like decision making, different iterations & other procedural features in which SQL lacks.

It combines SQL language with non-native procedural commands like (IF Conditional Statements, Assignments, Loops, etc.) and hence, enhance the capabilities of SQL. 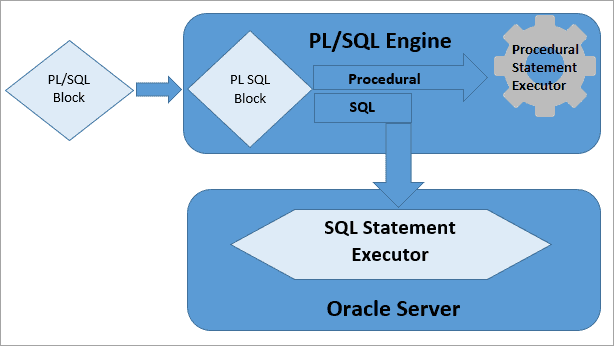 Using PL/SQL language for application development is beneficial in the below ways:

PL/SQL is a unit of multiple SQL statements placed together in a block and executed as one. These program units can be compiled by Oracle Database Server and are saved within the database. 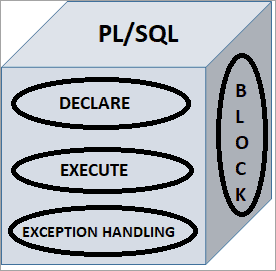 A PL/SQL program has been categorized into 3 sections:

Considering the above sections, a PL/SQL program is identified by four keywords DECLARE, BEGIN, EXCEPTION & END.

Let’s see various examples to get a clearer picture.

The below program has executable section only and DBMS_OUTPUT.PUT_LINE procedure is called to display text on the output screen.

Here, the program has a declaration section where a variable of type VARCHAR2 (50) is declared to hold the string “Hello!”.

This program has all sections i.e. DECLARE, EXECUTABLE, and EXCEPTION HANDLING.

This is how PL/SQL programs can be constructed with different sections.

Once constructed, these programs are supposed to be stored in the database so that they can be called whenever required. But the way above code blocks are written without any reference names is not an organized one, hence we can call them Anonymous code blocks.

Using anonymous blocks doesn’t fulfill the purpose of building large and complex applications as it would end up with a lot of code complexity and maintainability.

Here comes the concept of Named blocks, which is also known as Subprograms. Subprograms can have unique reference names with which they can be stored in a database. A call can be made to these programs using their reference names.

The structure of a named block would be the same as that of an anonymous block except it will not start with the “DECLARE” keyword, rather “CREATE” keyword. “CREATE” keyword instructs the compiler to create and save the code block as a database object which can be called later.

Named blocks can be of 2 types:

A function is defined as a named block, also known as subprogram or subroutine. The purpose of using functions is to perform computation and it will always return a value.

We can create a function as below:

We can create Stored Procedures as below:

APEX is an application development platform designed by Oracle that enables worldwide industries to deal with their business problems. It is a tool that allows organizations to showcase their data over an extensible platform through their web applications.

A variety of apps can be build using APEX right from a simple app of “accessing a spreadsheet” to critical apps with the availability of 24*7. Through this platform, Oracle has focused on accommodating developers with a variety of development options and leave users with an exceptional experience.

Oracle APEX tool is enriched with a lot of features and functionalities, and it has gained success over multiple facets like user interface, data, security, monitoring, etc. It provides flexibility to the users by not being any complex tool. To work on Oracle APEX, the developer doesn’t need to be a technical expert as APEX comes with a lot of help and guides.

The features are mentioned below:

Oracle APEX is a non-complicated and easy to use tool with a user-friendly interface known as Universal Theme. This theme enables developers to build self-responsive and interactive web applications as it is very rich and supportive in terms of guiding the user through the process of developing applications. A developer doesn’t need to be an expert in any coding languages like CSS, HTML, or Javascript.

This tool is very powerful and supports a variety of application building processes that can be consumed by industries to present their data in the required manner. It is a data-driven tool that holds the capability of processing and manipulating data efficiently. It empowers each user to customize their reports in their unique ways using the Interactive Report component.

Security is one of the crucial requirements of every industry these days. Oracle has designed APEX as capable of delivering highly secured applications by strictly following the security standards.

Oracle APEX is a portable tool and the user can utilize this feature as per their business requirement. They can deploy the tool anywhere and everywhere in this world, even on the Cloud, provided there is an Oracle database deployed.

Oracle APEX is featured with monitoring and logging capabilities to identify any performance problems, application issues, or hacking attempts.

Oracle APEX has been designed in such a way that it can support various languages and related environments and hence can be used by developers across different parts of the world to develop their applications.

Oracle APEX has a powerful architecture which mainly consists of 3 tiers.

Let’s go through the request flow to understand, how it works.

Here, a web request will be generated at the browser level and then passed to Oracle Rest Data Services i.e. ORDS. Further, ORDS passes that request to Oracle APEX within the database. Now, APEX will process the request and pass the response back to ORDS, which will pass it back to the browser. This is how the request flows within APEX architecture.

Oracle APEX has offered a wide range of solutions that helped developers solve their real-time business issues. It also allows developers to use third-party libraries which are an extension to APEX applications. These extensions will be the enhancements to the applications making it more privileged and powerful.

Along with multiple benefits, this tool has few limitations as well. These are listed below:

In this article, different development options offered by Oracle like SQL, PL/SQL & Oracle APEX has been introduced in a simpler way along with their features, benefits, and limitations. I hope, it gave you clarity on the usage of database development tools and languages.