Multiple people use a MySQL server instance, having different access levels. For example, some users are having read access to a specific database, similarly, some can have read-write access to a particular database, etc. 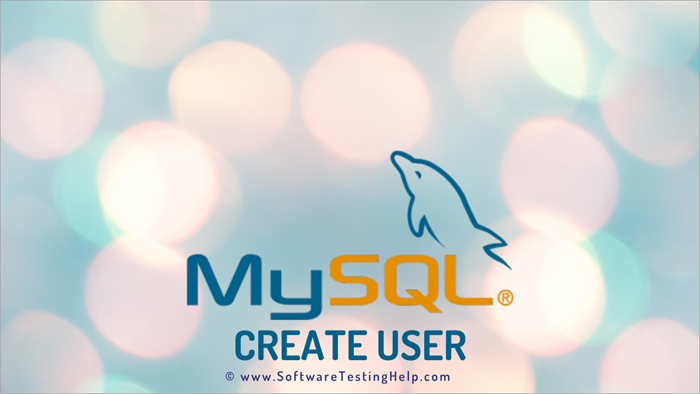 This command is generally accessible/is used by MySQL admins to manage access to different users of the MySQL Server instance.

While creating a user using the CREATE USER command, you can specify

The accounts are created in MySQL system table named ‘mysql.user’

Note: To use the CREATE USER command, the user should have CREATE_USER privilege or insert grant for MySQL system schema.

In the simplest form, the syntax for CREATE USER command is as below:

Please note, if the ‘hostname’ field is left blank then the value for the host is assumed to be ‘%’ which would allow any host to connect with the specified username.

Create a user with this syntax:

With the above statement, we have created a user with the username ‘userx’ and password as ‘password’. The hostname is localhost as we are creating the users on our local MySQL instance.

Let’s try querying the mysql.users table to see the entry for the user we created.

You’ll see the output as below:

The first 4 users are pre-created during MySQL installation itself while the last entry is the user we have created – i.e. ‘userx’.

It’s important to note that at this point we have just created a user without giving any rights to the user in terms of creating / updating / querying a database etc.

Let’s try logging in with this user with the MySQL client.

You can use the terminal to connect with the command below:

Now, we will create a new database using the CREATE DATABASE keyword.

As you can see above, there’s an error message generated which tells that the user ‘userx’ does not have access to create DATABASE Let’s see other options that could be used with CREATE USER Command.

‘Auth plugin’ specifies an authentication option & is stored in the plugin column of the mysql.user table. MySQL supports a handful of authentication plugins.

Some plugins that are supported are as below:

>>Refer here for a complete list of supported plugins.

Let’s see the authentication plugin for this user ‘user-default’ in mysql.users table:

Here in authentication_string, you can see its SHA-256 value for the password string – ‘P@ssw0rd’.

Let’s now create a user with an authentication plugin. ‘MySQL native password’ and see what’s the value of the plugin that gets stored.

MySQL also provides assigning pre-defined roles to new users. These roles already have a configured access to some or all databases (which could be customized as well), for example, a role named ‘developer’ could be created which could be assigned all privileges to a database and later we can use the same role to assign to new users.

Let’s see this with an example:

Let’s try logging in with the user named ‘user-with-role’ and we will try to create a new table in the test database.

Creating a user with SSL/TLS options would require both client and server to have SSL certificates installed. By default, SSL is not configured for MySQL.

Follow these steps to configure SSL for MySQL server instance.

In order to create a user with SSL enabled, you can use the REQUIRE SSL option while creating the user.

Similarly, creating using X509 would expect the client/user to connect to have a valid X509 certificate.

To create a user with an X509 certificate, use the below query:

#2) Expire the password after a fixed interval. Password expiry can be configured with the configured interval, for example, 90 days.

#4) New password should not be the same as configured previous passwords.

In the below query, the new password set by the users should not be the same as the past 2 passwords.

Resource limits are required especially for production MySQL instances so as to avoid getting the database overwhelmed by queries/requests from a single user and which could impact the MySQL server performance.

We can set the Resource limits by using any 3 of these options below:

#1) MAX_QUERIES_PER_HOUR – Number of get queries allowed for a given user per hour.

Suppose if the user tries to exceed more than 5 queries per hour, the MySQL server would throw an error like below:

#2) MAX_UPDATES_PER_HOUR – Number of update queries allowed for a given user per hour.

#3) MAX_CONNECTIONS_PER_HOUR – The number of times an account can connect to the server per hour.

#4) MAX_USER_CONNECTIONS – The number of simultaneous connections to the MySQL server instance from the given user.

Please note that all the above options could also be combined while creating a user. Suppose if we want to specify MAX_QUERIES as 10 and MAX_UPDATES as 100, then we can have a single CREATE_USER query as:

MySQL ALTER USER is used to update/modify existing MySQL user accounts. It can be used to,

Let’s see an example of using ALTER USER to unlock a locked account.

Create a user in a locked state and then unlock it with ALTER USER command.

Now, on logging in with this user, we will get an account locked message (as the user was created in a locked account state).

Use the below query for unlocking the user with the ALTER command.

MySQL DROP USER command removes one or more existing users and all their associated privileges and grants.

Please note that it will not remove/delete any data inserted/tables created or updated by the user, which is being deleted.

If someone tries to delete a non-existing user, the DROP USER command would throw an error.

Let’s create a user and delete it using the DROP command:

Answer: User in MySQL is an account/entity that can log in to MySQL server instance and perform different operations. A user can be assigned role-based access or granular access to one or more databases and/or tables.

Q #2) How to check different users connected to MySQL?

Answer: In order to see the active user sessions on a MySQL server instance, you can run processlist command as below.

The output of this command would display different attributes of the active user’s sessions connected at the time of command execution.

Answer: MySQL works on the concept of user sessions. When logged in with a given user, you can either plan to terminate the session or open a session against a new user in a new window or as a new connection in MySQL GUI clients like a workbench.

To log in with a particular user from mysql client you can use the below syntax:

After writing the above command, once you press Enter, you will be prompted to enter the password for the user specified in {userName} field. Once the password is validated, you will be taken to MySQL shell/command prompt.

To log in with a separate user, you can terminate the current session by entering the exit command and re-login with another user.

It’s also possible to have multiple connections to the MySQL server instances for different users. You can simply open a new tab/window for the command prompt and use the same command to log in with another user.

In order to grant just read-only access to a user, you can grant SELECT access to a database (using * for all tables or explicitly mentioning table name as per requirement)
Let’s understand this with the help of an example below:

Now, grant read access to all the tables of a database named ‘test’ by using the GRANT keyword in MySQL

Now, to validate the access, you can login with this user named ‘readaccess’ and try querying the tables inside the database ‘test’.

However, if you try inserting data to any of the tables inside the test database, then you would get an access denied error as we have explicitly just granted read access to this user.

Q #6) How to find MySQL user’s name and password?

Answer: The MySQL user and password mapping is stored in ‘mysql.user’ system table, which is an access restricted table. The password is stored in encrypted format depending on the encryption mode that was chosen during the user creation.

However, if someone’s account is locked, MySQL provides another command called ALTER USER, which can be used to unlock a given user account.

In this tutorial, we learned about the MySQL CREATE USER command, which is used for authentication and access management generally by Database admins.