This tutorial explains the step-by-step method to set up and use the MySQL Docker container with examples:

Docker is a container orchestration platform that enables us to run an image of any application (in this case MySQL server) on a host system (which could behave in any OS installed – example: Linux, Windows, MacOS, etc)

Using MySQL with docker would help a developer or anyone wanting to learn or experiment with MySQL without going through the hassle of any installation or configuration.

Running through docker just requires you to have docker installed in your machine, and then you can use the readily available docker images of MySQL. 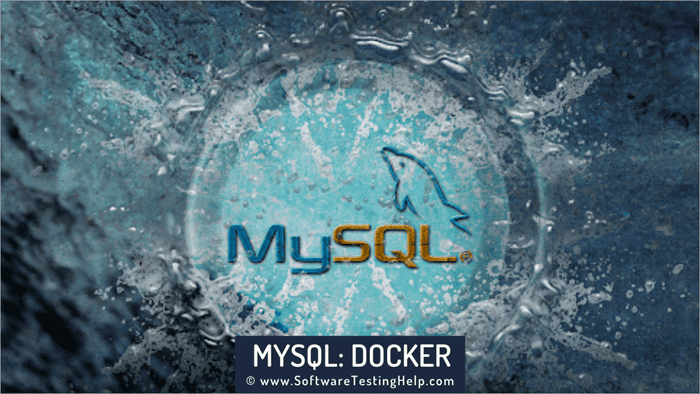 Running MySQL with Docker containers is a widely used mechanism, especially for the microservices architecture where usually each microservice works with its own database/tables and the isolated integration/component tests can be executed on the containerized versions of the databases.

Think of docker container as a lightweight virtual machine that can run independently of any other application (and can live within its own context). Any application – for example, MySQL, in this case, can be bundled together as a container and can be deployed on a local or remote host.

Now this container is a mini-ecosystem and has all the components bundled together that would be required for MySQL to execute properly.

For creating MySQL as a docker container, the host machine should have docker installed.

>> Recommended reading for installing Docker=>  Installation And Introduction To Docker.

To validate the docker installation, simply run the below command:

If the output displays like below, this means the docker installation was successful.

Steps To Setup MySQL With Docker

>> Click here to find all available docker images/versions of MySQL

Unless a specific version is required, we can always specify a tag as ‘latest’ which will pull the latest available version of MySQL from the docker hub registry commonly called docker hub.

Once executed, you will see the output as below: 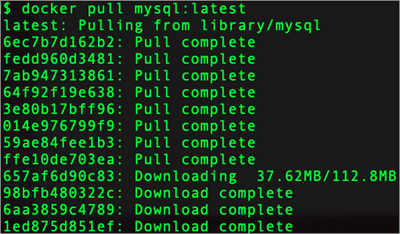 Once the container image is fully downloaded on the host, you can see all the downloaded images by running the below command.

#2) Start the container with the pulled image

Now, let’s start a container using the downloaded docker image for MySQL.
By default, if no root password is specified along with the docker command while creating the container, there would be a random password created for the root user and to fetch the root password, we would need to access the logs of the docker container.

a) Let’s first run the container with the downloaded image

In the above syntax,

Example: We will create a container named learn-mysql-docker from the previously used image tag – mysql:latest

Notice the use of -e flag, which is nothing but specifying an environment variable. Here we have specified the value for MYSQL_RANDOM_ROOT_PASSWORD=1

This means that while starting up the MySQL server, the root password would be set to a randomly generated String (we will later see in the next section, how we can retrieve that dynamically generated random password through Docker container logs)

Note: There are other options as well for the default setting of the root password.

The available options are as follows:

There’s another environment variable available, which is MYSQL_ONETIME_PASSWORD. This, when set to true (1), will expire the root user password and expect the user to create a new password after the first login. (Please note that this env variable is applied only in MySQL versions later than 5.6)

Once the above command is executed, you will see docker displaying the ID of the created container.

Let’s validate whether the container was created successfully by listing the available docker containers on the host and filtering the container name that we had specified:

b) Fetch the root password: In order to connect with the root user, we would need to enter the password. Since we had mentioned the env variable to set/allow a random password, we will be fetching this password from the Docker container logs.

Execute the command below to fetch the logs and the randomly generated password:

As highlighted in the above image, you can see a random password was generated. In further sections, we will use this password to log in with the root user.

In this case, the command to create the container is as below:

In order to do so, we will use the created container name (or id) and login to the bash shell application within the container.

If the container is up and was successfully created, after running the above command you will see a bash shell inside the container.

Once logged in to the container, we will start the MySQL shell with the root user and specify the obtained randomly generated password.

Once we are logged in with the root user, let’s now try to execute some simple commands to ensure everything is working fine.

a) SHOW all databases: Execute the below command:

b) Change the password of the root user to ‘Password’ – Execute the command below and retry logging in with the root user (against the new password i.e. Password, which is set by this command)

In the above section, we have logged into the MySQL shell that was inside the docker container. We can also expose the port from MySQL container in the docker to a local port and use that for local development to connect to MySQL.
Let’s try to understand the different steps involved here:

#1) Start the container and map to a local port. In this step, we will map the port from the docker container to a port on localhost which would be used to connect to MySQL.

a) First stop/remove the container we have created in previous sections. This is required to avoid confusion and getting port address-related errors.

Commands that need to be executed are:

b) Once the container is removed, we can start a new container with the same MySQL image and also map the docker port to local host port.

This can be done by running the command below:

Let’s try to understand the above command

#2) Once the container is successfully started, connect to MySQL from localhost -using command line or GUI tools like MySQL workbench.

Once the command is executed, you will see that you are connected to docker based MySQL instance. You can try running any command like:

And ensure that the setup is working fine.

b) To connect through MySQL workbench, you can simply specify the hostname as localhost and port no. as the mapped port which was used.

Set up a new connection with localhost and port as 13306.

Store password in keychain as shown in the below image.

Then, connect to the database.

Docker compose is the details required to set up a docker image/container in a template form, which is in YAML format. This makes it easy to share and check it into version control systems like TFS or GIT, where anyone working on the project can simply take this file and execute it to set up the required docker container with the required information.

There are a couple of handfuls of utilities and web pages that allow you to create docker-compose files easily.

We can use the one from here and just paste the docker command we have used to create the container. 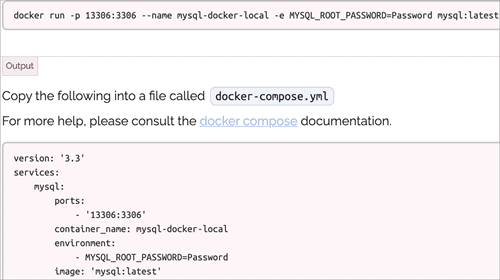 We can copy the content of the created file and save the contents with the file named docker-compose.yaml in a folder on your desktop/laptop.

If the contents of the compose file were correct and the image is available, a new docker container would be started (and could be used in the same way as explained in the previous sections of this article)

Q #1) How do I create a database in MySQL Docker?

Answer: MySQL Docker in a container instance can be connected through the command line by logging into the container. Once the connection is established, any SQL commands can be executed.

To connect to MySQL inside the container, here is the syntax:

Once the above command is executed, you will be prompted to enter the database password. And once the password is verified, you can execute any SQL based command.

Q #2) How to expose a particular port from docker for MySQL?

Answer: A port mapping can be specified while the docker container is being created. For example, if you want to map the docker port to a particular port on your localhost, you can use a command like:

Q #3) How to restart/stop and remove a docker based MySQL container?

Answer: There are a couple of handy and useful commands for the docker containers.

Q #4) How to connect to a dockerized MySQL instance from the host machine?

Answer: Once the docker port and localhost ports are mapped, we can connect to the MySQL instance sitting inside the docker from the localhost through the command line or through UI tools like MySQL workbench.

For starting through the command line – MySQL command-line tools should be installed on the host machine as well.

The below command can be used to connect to MySQL instance in docker through the host:

Q #5) How can we run a specific version of MySQL using Docker?

Answer: While specifying the docker image (using -d) option, while creating the container, we can specify the available images/versions of the container.

If the latest is specified, it would fetch the latest published image of the given container.

For example, for MySQL we can specify mysql:latest to fetch the latest version and something like mysql:8.0.22 for example to fetch version 8.0.22.

>> Refer to the Docker Hub documentation for MySQL to view the complete list of all the available versions.

In this tutorial, we have learned about setting up a MySQL server using Docker instead of the actual host machine.

Docker is a powerful container orchestration system, which allows a user to host a number of applications as containers and allows them to be used as an isolated system in itself. It also requires minimal setup and provides fast means to avoid all setup hassles with just a couple of commands.

These days, with microservices architecture where different microservices rely on their own databases, deploying MySQL servers as Docker containers have become quite a common practice.

It’s also widely used for any local execution, creating proof of concepts or even for running end to end integration tests in an isolated environment.