This tutorial explains how to use MySQL CONCAT with Select and GROUP_CONCAT functions with syntax and practical examples:

CONCAT is a String function supported by MySQL to combine or join two or more Strings together and return as a single value. The name CONCAT comes from the verb concatenation, which means joining 2 or more entities together.

In this tutorial, we will learn the usage of CONCAT with query examples and other variations of the CONCAT function provided by MySQL. 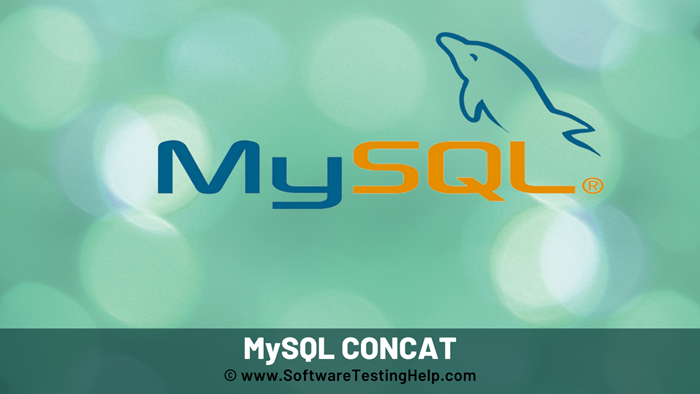 The syntax of the CONCAT function is straightforward. It just contains a comma-separated list of the Strings that needs to be joined.

Both the input and output types expected by the CONCAT function are Strings. Even if it is supplied with numbers, the final output will be String.

#1) With input types as Strings.

#2) With input as numbers/floating-point numbers.

CONCAT is most widely used alongside the SELECT queries, where it can combine data from 2 or more columns into a single column.

Let’s see this in action.

Insert some dummy data into the table.

Now, write a SELECT query to get a full name as a concatenated string combining first name and last name.

As you can see in the above output, there’s no spacing between first name and last name, which is making it unreadable. We can add spacing by updating the CONCAT function to have an extra space character as a string to be concatenated.

This would ensure that with each entry, you would have extra spacing in between.

It’s similar to CONCAT, but it differs in the way that CONCAT is used to combine values across columns, while the GROUP_CONCAT function is mostly used for concatenating values across rows.

So, in the GROUP_CONCAT function, you can see:

In the Student table example above, suppose we want to find out a list of concatenated departments.

In the above query,

Let’s try the same example with the DISTINCT clause:

This would just return the distinct values of the department column.

So, in the above query,

Let’s see another example to list down the concatenated values of students in each department.

Here we would not want as DISTINCT as 2 students in a department might have the same name.

In the above example, suppose we want to show the CONCATENATED values of name and last name along with each department.

To achieve this, we can use CONCAT within the GROUP_CONCAT command.

Let’s see this in action below :

CONCAT expects String arguments and returns the output as String.

If any input to the CONCAT function is NULL, then the output would be NULL as well.

In order to handle NULL values, you can make use of an ifNull statement within the CONCAT function which would ensure a default or blank value in case of the NULL value from the column.

Suppose we have 2 Strings and 1 NULL value to CONCAT, like the above example.

In the above query, we have added a ifNull function surrounding the NULL value (or a column which could be NULL) – if the NULL match is successful, then it would return ‘hello’ else the actual column value.

So in the output, you can see for the NULL string, ‘hello’ is printed.

Answer: MySQL provides a CONCAT function to combine or merge 2 or more columns from one or more tables and return the merged values in the output.

Q #2) Where and when I have to use the concat method in MySQL?

Answer: CONCAT method is generally used against the display of query results where you would want to join 2 or more columns and represent them as a single column.

It’s also important to note that both GROUP_CONCAT and CONCAT can be combined to return desired results.

GROUP_CONCAT is used generally in scenarios where you would want to GROUP or combine values across rows. For example – you have a product table with product name and category and you want to list down all the products against a given category as comma-separated-values -then you can use GROUP_CONCAT.

Q #4) How can I specify a separator using the CONCAT command?

Answer: With CONCAT, you can specify separator as a separate string to be concatenated.

For example: Suppose you want to use ‘|’ as a separator then in the CONCAT command you can specify this string between the column names you are concatenating.

Q #5) What is the difference between CONCAT and CONCAT_WS commands?

Answer: CONCAT_WS is another variation of CONCAT provided by MySQL, which enables a user to specify a separator for the columns that are being concatenated.

This is preferred over CONCAT in situations where you want to merge more number of columns and use the same separator for all the columns that are concatenated.

Now we want to concatenate all these three fields and separate by ‘|’.

Using CONCAT, we need to specify the separator as a separate string to be concatenated.

While with CONCAT_WS you would just need to specify the separator once.

In this tutorial, we learned about the MySQL CONCAT function and its usage. This function is generally very helpful when displaying query results for merging values against different columns.