This tutorial explains the MySQL UNION command, its types, Union vs Union All, and examples to combine data from 2 or more queries:

MySQL UNION is used to combine results from multiple SELECT queries into a single result set. It’s also possible to have all the complex queries/operations in the SELECT queries and perform UNION with other SELECT statements to yield a combined result.

The default characteristic of a UNION statement would be to remove the duplicate entries or rows from the resulting set of rows, however, it does provide ways to fetch the duplicate records as well using the UNION ALL clause. 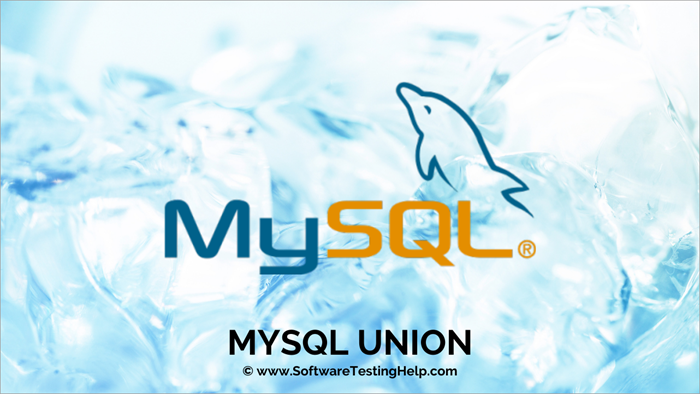 UNION operation could be very well understood from the principles of SET Theory.

Suppose we have tables A & B as represented by sets below and they have some overlapping data (or it can be totally unrelated too) – UNION will include the combination of data from both the tables.

Let’s see an example where sets A & B have some common elements. The UNION will contain all the values from set A & B with the duplicate values omitted. 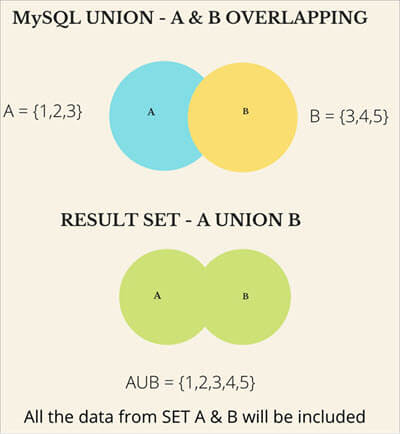 Now, what if sets A & B are disjoint and don’t contain any common elements? Here as well, the UNION will return the same result. 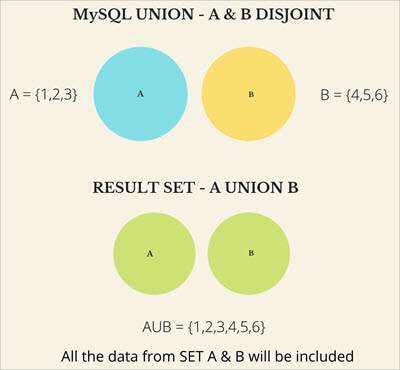 Let’s discuss the scenario where there are overlapping elements between sets and we want to have the duplicate values also to appear in the result set.

MySQL provides a way to do that using the UNION ALL option as shown in the below image. 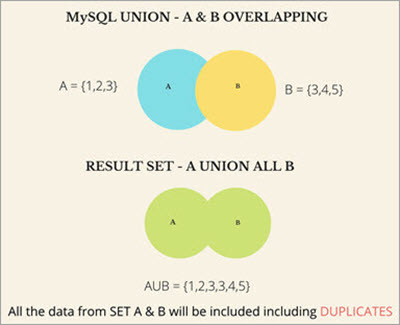 What Problem Does MySQL UNION Solve

MySQL UNION is used when you have similar data across 2 or more tables and you want to see a combined view of the data contained in both the tables rather than running SELECT statements for individual tables.

For example – Suppose there are 2 tables – Employee and Student. And you are working on a person database which just wants to have a name, age, and birth date for all the employees and students.

Without UNION, you will need to execute separate SELECT queries for both the tables and then perform the desired computation with the obtained result set.

The below queries will return a UNION of 2 or more than 2 SELECT statements.

Let’s try to see different components of the syntax

If duplicates are desired, then we can use the ‘ALL’ option along with the UNION.

The usage of DISTINCT is implied by default. Please note that it could be specified explicitly as well to have more readability.

Let’s see a sample example of a UNION query.

Suppose there are 2 tables – employee and student – each having personal information.

Now, enter some dummy data into both of these tables as shown below:

As you can see above, we have intentionally added a row that has the same attributes for name, age, and date of birth.

Let’s now see how we can combine the data in these 2 tables using UNION commands. We will be querying user name and age from both the tables.

You will see 9 records in the result (which means that the above query has omitted the duplicate entry).

UNION With UNION ALL

Using UNION with ALL clause will ensure that the duplicate entries get displayed as well.

As you can see above, the result set includes the combined result with individual SELECT conditions validated.

The Results of a UNION query are unordered by default.

In order to impose an ordering by a column existing in the resulting set, an ORDER BY clause can be specified at the end of the UNION command.

Let’s use the same Employee/Student data and order the UNION results in ascending order by age.

The above result set is ordered by age values in increasing order. We can also use column aliases to refer to the columns in the ORDER BY Clause.

For example: – A query like the below will also yield the same result.

There’s another way to use the ORDER BY clause by just mentioning the column position instead of the column name.

For example: In the above UNION query, we are selecting name and age which implies that these columns are at positions 1 & 2, respectively.

So to ORDER BY age, we can simply specify the position instead of the actual column name.

Hence, the below query will yield the same result as well.

MySQL UNION Vs UNION ALL

MySQL provides 2 variants of UNION i.e. UNION DISTINCT and UNION ALL
Please note that the DISTINCT is implied by default, even if not stated.

The major difference between both of them is UNION ALL allows to combine and return duplicate rows as well, whereas UNION just returns the combined rows removing duplicates.

The below table explains the details:

Answer: UNION and JOINs are used for practically 2 different purposes.

Q #2) What is the UNION ALL operator?

Answer: Similar to UNION, the UNION ALL operator also returns the UNION between 2 SELECT queries, but the difference is that it also contains the duplicate rows/entries.

Q #3) What is the difference between UNION and JOIN?

Answer: Both UNION and JOIN are used to combine data from 2 or more tables. But there’s a huge difference in terms of the result set obtained and the way data is fetched.

Similarities and differences between JOIN and UNION is enlisted in the below table:

In this tutorial, we have learned about using MySQL UNION to combine data from 2 or more SELECT statements.

The UNION statement is really helpful for collating similar data from large sets of different tables and then running an analysis on the combined data.

UNION command also supports an ALL clause which enables fetching the duplicate records as well.