This Tutorial Explains the MySQL UPDATE Statement Along with Query Syntax & Examples. You will Also Learn Different Variations of MySQL Update Table Command:

Using this command, we can update one or many fields. We can update the values of a particular table at a time. By using the WHERE clause we can specify the conditions used especially when there is a need to update specific rows from a table. 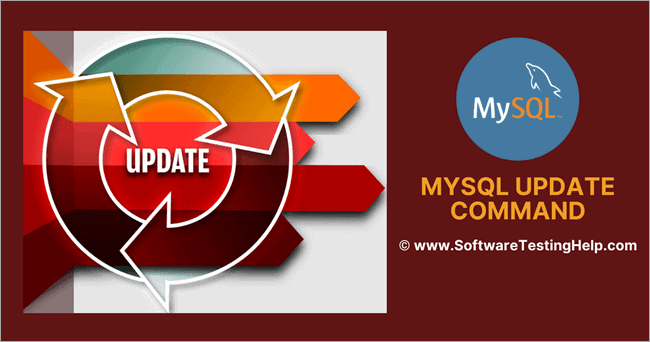 Before proceeding ahead, please note, that we are using MySQL version 8.0. You can download it from here.

The WHERE clause is, however, significant. If not mentioned, or if the condition is not set correctly then neither the table nor the non-required rows will get updated.

Modifiers In An UPDATE Table Statement

Enlisted below are the modifiers in an UPDATE statement.

LOW_PRIORITY: This modifier informs the MySQL Engine to delay the update until there is no connection reading from the table.

IGNORE: This modifier informs MySQL Engine to continue with the UPDATE operation even if there are any errors. No update action is performed on the rows that caused errors.

Given below is a sample table created in MySQL.

Now, let’s find out a record that we would want to update. First, we will have a look at a scenario where we have to update a single column using the UPDATE keyword.

Here is an employee with the employee number as 1008.

The query and its corresponding results are as follows: 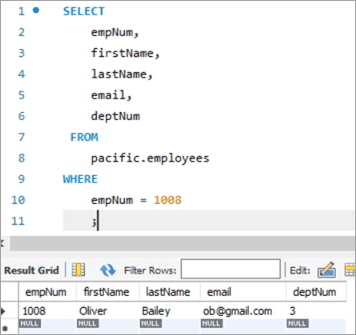 Let’s update the email ID of this employee from ob@gmail.com to oliver.bailey@gmail.com, using the UPDATE keyword.

UPDATE: The keyword informs the MySQL engine that the statement is about Updating a table.
SET: This clause sets the value of the column name mentioned after this keyword to a new value.
WHERE: This clause specifies the particular row that has to be updated.

Post executing the UPDATE statement, the output will show the statistics related to the statement execution.

Following are the details that are shown:

In order to verify the output of the UPDATE statement, let’s re-execute the SELECT statement to see the change in the email ID. 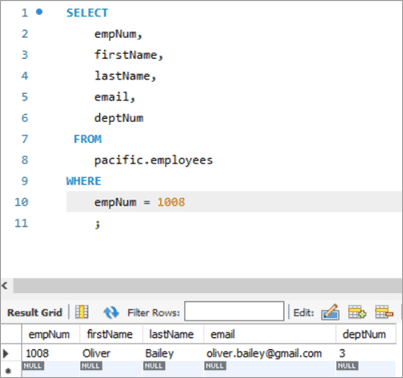 The syntax to update more than one column using the UPDATE statement is the same as that of updating a single column. One single SET statement will have multiple column names along with its new value that has to be set, separated by a comma.

Let’s have a look at the row that we need to update. Row with the employee number as 1003. 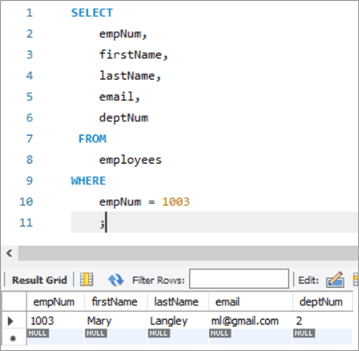 Here, we will try and update the lastName from “Mary” to “Margaret” and then the email ID from ml@gmail.com to margaret.langaley@gmail.com.

The following is the UPDATE query. Do observe the column names separated by a comma.

The output of the above execution shows the same statistics as in the previous case.

Following is the output for the same record post the execution of the UPDATE statement. 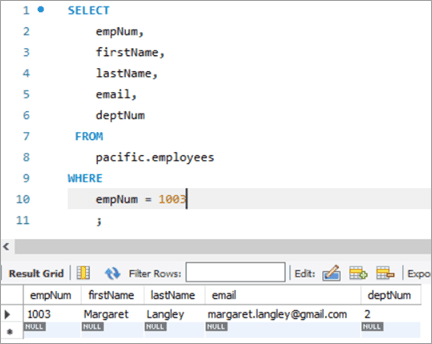 Let’s see more about using the REPLACE function to UPDATE a row in the table. Here is our target record that we want to update.

The below record is for employee number 1010. We will target to update the email ID from ja@gmail.com to jacob.armstrong@gmail.com. 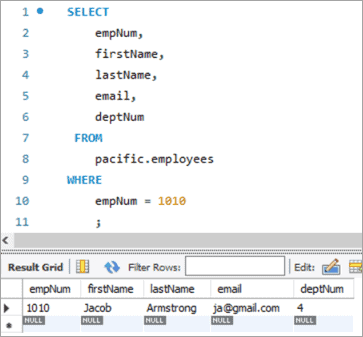 Let’s use the following UPDATE query with the REPLACE function that will update the email ID.

Following is the snapshot of the table post-execution of the UPDATE statement: 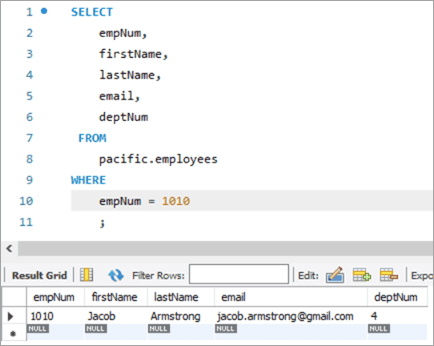 In this type of UPDATE, the new value for the column to be updated is fetched by a SELECT statement in a subquery. So, let’s take an example here from our “employees” table. Here is our target record that we want to update. 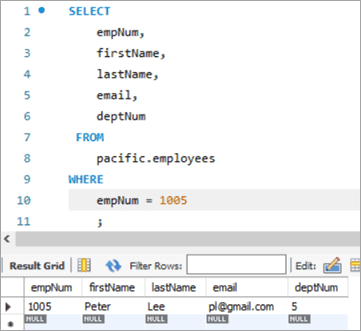 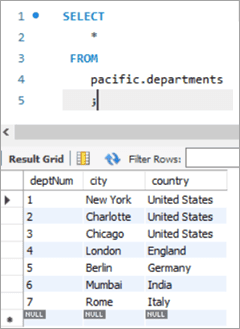 In order to achieve this task, the following UPDATE statement is used:

In order to verify the output of our UPDATE statement, let’s execute the SELECT statement. 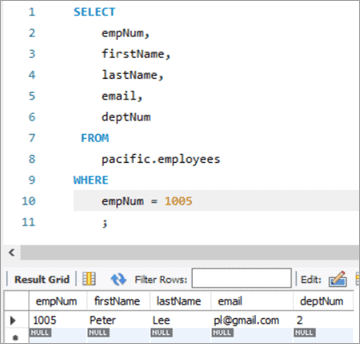 As shown above, the value for the deptNum column has been updated to “2”.

At times, we might face a requirement where we have to update one or more columns for multiple rows with different values.

The general syntax is as follows:

To achieve this, we will execute the following ALTER statements to add a column:

The following would be the table structure post the above changes. The new columns will be added with NULL as value. 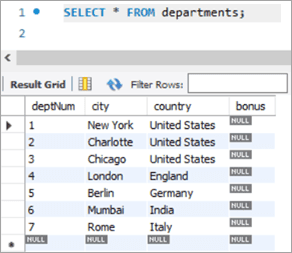 Next, let’s write the UPDATE query that will update the bonus percentage for each department.

Post execution of the above statement, the following is the snapshot with the updated values for the Bonus column. 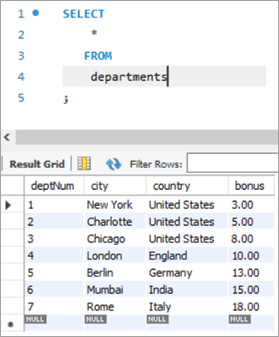 JOIN is one of the most important keywords in the SQL statements. Usually, you might have used it in the SELECT statement.

There are basically four types of JOIN statements:

MySQL gives a unique opportunity to use JOIN even in UPDATE statements to perform cross-table updates. However, it’s limited only to INNER JOIN and LEFT JOIN.

The generic syntax of UPDATE statement using the JOIN keyword is as follows:

To achieve this, we will execute the following ALTER statements to add a column:

Next, we will populate the two new fields that we have added. Post populating the values, the following is the content of the table.

Now, let’s use the JOIN keyword and update the salary of all the employees with a bonus percentage in the departments’ table. Here, deptNum is the key on which the two tables will be matched.

Following is the snapshot of the salaries of employees as of now: 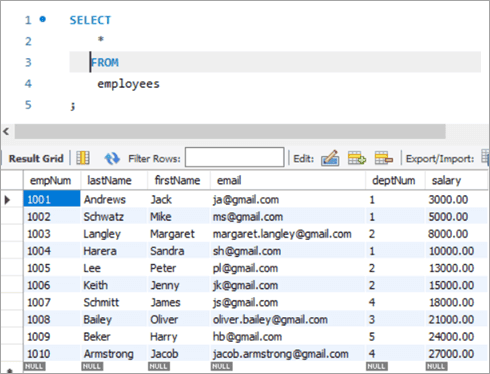 Snapshot from Departments table is as follows: 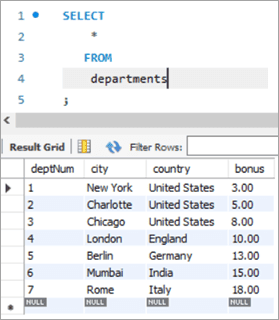 Following is the UPDATE query that will update the salary of the employees based on the bonus percentage in the departments’ tables based on the deptNum key column.

Now, let’s verify the salary of each employee post-hike. 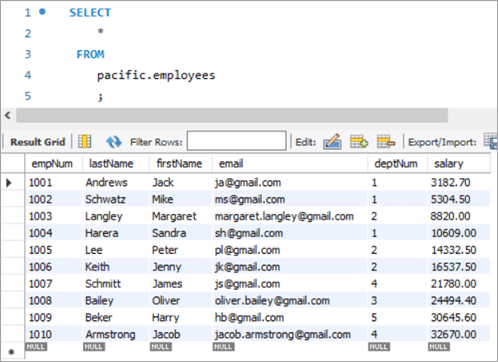 If you compare it with the previous snapshot, then you can easily understand the bonus percentage added to the salary.

All employees must be cheering!

As explained in the previous section, there are two types of JOIN that are allowed in MySQL UPDATE. We have already seen UPDATE using INNER JOIN.

To achieve this, let’s add a new employee to the employee database.

Following is the new record that we have added:

Next, we will give Tom a bonus of 1% on top of his salary using the UPDATE statement with LEFT JOIN clause:

Given below is the salary of TOM post-hike.

If you compare it with the previous snapshot, you can easily understand the bonus % added to the salary.

Q #1) How do I update attributes in MySQL?

Answer: We can update attribute(s) using MySQL UPDATE statement, with the statement beginning with the UPDATE keyword followed by the table name. Next is the SET clause followed by a column name and a WHERE clause.

Q #2) How do you update multiple records in MySQL?

Answer: As depicted above, under the “Update Multiple Rows” section, we can update multiple rows for one or more columns with the same or different values using the CASE statement.

Q #3) Can we use JOIN in Update query in MySQL?

Answer: You can download MySQL version 8.0 from here: MySQL.

Q #5) What is the significance of the WHERE clause in the Update statement?

Answer: WHERE clause restricts the number of rows that should fit in the UPDATE clause’s criteria.

Suggested reading =>> How to use the MySQL If Statement

Thus in this tutorial, we have learned about 7 different ways of executing MySQL UPDATE statements.

We can use either of these, based on our requirements.