Learn about MySQL SUBSTRING and SUBSTRING_INDEX functions and its usage with multiple examples:

We will also learn about another variant of the SUBSTRING called SUBSTRING_INDEX. This function accepts character or String value as the delimiter and executes a search against the given delimiter value. 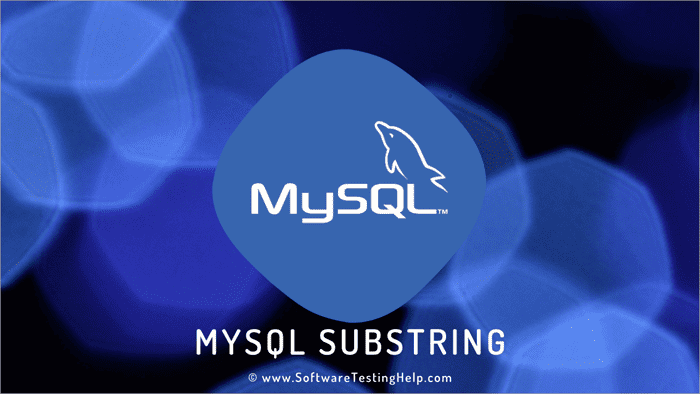 We will also look at some examples to understand how these functions can be used while querying data as part of the SELECT queries.

There are 2 ways in which we can use the SUBSTRING function.

Let’s understand the syntax before we dive into the examples.

Let’s see some examples to understand the MySQL SUBSTRING function.

Let’s see the query below:

It’s important to note here that we have not mentioned any value for the count, but we are still getting the correct String – this is because when the count is omitted, the entire String starting from the given index is returned.

As you can see above, the output contains the entire text ‘Testing Help’.

Now, let’s look at an example where we will mention the count of the characters to be returned.

Suppose we just want to extract the ‘Testing’ word from the String ‘Software Testing Help’. Then we can mention count as – 7 (which is the length of the word ‘Testing)

Let’s see the query below:

Here we have described both the starting index and count of characters as part of the query to get the required result.

So far, for the examples we have seen, we have specified the start_index as a positive value.

We can also specify the start_index as negative, which simply means that instead of counting from left, the MySQL engine will try to count the start Index from the end of the String.

For our String ‘Software Testing Help’, let’s add a row below to identify the right indexes

So, the bottom row here represents the right indexes. Now suppose we want to extract the word ‘Testing’ using the MySQL SUBSTRING function with the right index.

As you can see in the example above, mentioning the right indexes as a negative value will still yield the same result.

Index Out of Bounds

You can see above, here the count was mentioned as 100, but the String is just 21 characters long.

This is another variant of the MySQL SUBSTRING function.

Here, instead of mentioning the actual value of start_index, we can simply mention the character and the index and the number of times the delimiter needs to be searched before returning the output.

An important point to note here is the SUBSTRING_INDEX

Let’s understand this with the help of some examples.

We will use the same string ‘Software Testing Help’ as our Input String for all the examples that we are going to discuss in the next section below.

Searching For A Character

While searching for character ‘T’ the output would be ‘Software ‘. Notice that the extra space after the word Software will be included as well.

Search for a character that is appearing more than once. Here, it is – ‘e’

In this example: since we have specified the count as 1, the output would be String till the first occurrence of ‘e’ is reached.

Change the count to 2 for the same character ‘e’.

Now, we can see, Substring up to the second occurrence of character ‘e’ is returned.

Take another example to understand that the SUBSTRING INDEX is case sensitive. Let’s try with the letter ‘t’ instead of ‘T’

Searching For A String

We can use the SUBSTRING INDEX function for searching a string instead of a character. Let’s search for the word ‘Testing’.

Searching For A Non-Existing String

Using SUBSTRING INDEX with a String that’s not existing.

The output might be a little unexpected here. But since the MySQL Engine can not find the required match, it returns the entire string as the output.

Searching For Character Or String In Reverse Order

Similar to the SUBSTRING function, the SUBSTRING INDEX function also allows having the count mentioned as negative numbers. This means, instead of traversing from left to right, the MySQL Engine will try to find a match from right to left.

Understand this with the help of some examples.

In the above example, you can see the delimiter is ‘T’ while the count is -1. So the output would be Substring from the right until the first match for the letter ‘T’ is obtained.

We generally use the MySQL String functions while querying data from 1 or multiple tables. It can be used to split values in a column, or just to display the essential values as per the need.

Example: Assume that we have an employee details table consisting of id, name, and address.

And the address column is of format – {HouseNo},{StreetName}
Below is the Script to create a table and insert dummy data:

Use the MySQL SUBSTRING function to have the house number extracted from the address column as shown below.

In the above query, you can see that we have used the SUBSTRING_INDEX function to obtain the House-Number from the address column and we have used ‘,’ as the delimiter.

Similar to this, there can be many applications where we would like to extract the String to fetch some meaningful information from a larger String Input or the column value.

Q #1) Which MySQL function returns the position of the first occurrence of a SUBSTRING in the string?

Answer: MySQL provides 2 functions to return or extract a SUBSTRING out of a given String or column value.

Q #2) What is SUBSTRING_INDEX in MySQL?

In this tutorial, we have learned about MySQL SUBSTRING and SUBSTRING_INDEX functions. Both the functions extract a Substring against the given input string but work in a slightly different way.

SUBSTRING expects the index as the actual numbers, while the SUBSTRING_INDEX can have the delimiter specified as a Character or a String value, and then the MySQL Engine can extract against the required matching String or Character.

Both these functions are largely used where a column having multiple pieces of information can be extracted into sub-columns using String extraction logic based on appropriate requirements.