As the name suggests, the REPLACE function is used to replace the matching expression or string with the replacement String or value provided as an argument to the function. 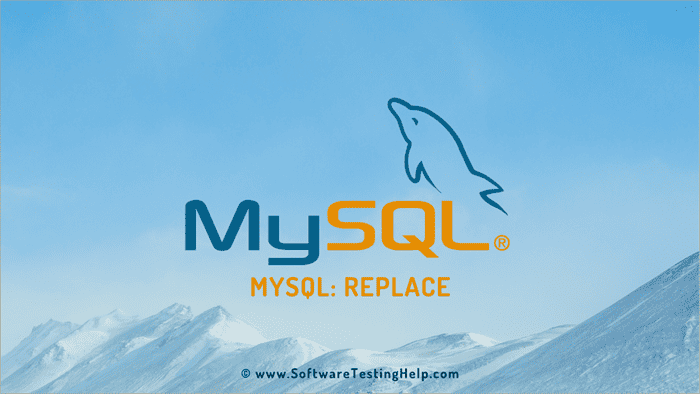 The REPLACE function comes under the category of String functions in MySQL.

There is another variant available in MySQL, which is a REPLACE INTO Statement. Unlike substituting a specific string, REPLACE statement essentially replaces the entire row in a MySQL table. We will see examples for both variants.

Let’s create a sample table and add some sample data to understand the concepts better.

Note: It’s important to understand the REPLACE function does a CASE-SENSITIVE match.

#1) Replacing a character in a given String

Here we are replacing occurrences of letter ‘H’ with ‘HH’ and aliasing the new column with replaced text as replaced_string.

#2) Replacing a String against given Input

Here we are replacing the string ‘abt’ with ‘about’.

Let’s now look at an example where we want to update a table column using the REPLACE function.

Consider the sample data for the employee table (refer to the Test-Data section of the article). Suppose we want to update the designation and change the word `Manager` to `Mgr` for all the rows.

We can easily achieve this using the REPLACE statement.

Execute the SELECT statement to view the output:

We can see in the above output table that all designations having the word ‘Manager’ has been changed to ‘Mgr’.

For example: Suppose there’s a table containing product description, and it has a lot of spelling mistakes, for example, about spelled as about, etc. Then, by using REPLACE, this could be easily achieved over the entire table.

The REPLACE command works similar to INSERT, the only difference being for the matching row, the data for the existing row is replaced and if there’s no existing row (as compared against primary/unique keys) a new row is inserted.

Let’s try to understand both the above modes through an example:

Regarding the above sample data that we have inserted, suppose we want to change the values for employee#1 as below:

Execute a SELECT statement before running the REPLACE statement as below:

Run the SELECT statement for employee_id-1.

In this case, the row being replaced is not matched against the existing rows and hence Inserted as a new record.

Let’s try REPLACING a row with employee id – 6.
Now, since there’s no existing row with that ID (and id being PRIMARY KEY), the command execution results in a new row being inserted.

The output of the REPLACE command would return – 1 row(s) affected, indicating it just did an INSERT.

Run a SELECT command to query data in the table.

Q #1) What’s the difference between REPLACE function and REPLACE statement in MySQL?

Answer: REPLACE INTO command can be used to replace an entire row in MySQL. The row is matched against the table’s PRIMARY KEY, and if the key match is successful, then the row is replaced.

Answer: Using the MySQL REPLACE() function, we can either replace individual characters as well as entire words.
Let’s look at some examples below:

In this tutorial, we learned about the usage of the MySQL REPLACE() function and MySQL REPLACE INTO Statement. Both the variants are very useful to perform bulk updates or for targeted string replacements within a given column or field.