Comprehensive comparison Of MariaDB vs MySQL based on various factors such as platforms supported, performance, syntax, popularity, etc:

In today’s dynamic data world, there are a variety of databases and we can select the one that suits our requirements and we need the most. Therefore, it’s important to not just understand the databases but also understand the key differences between those.

We will go through the differences between MariaDB vs MySQL in this tutorial, which will help to make a well-informed decision. We will compare MySQL v8.0 with MariaDB v10.5.

We will also look at the disadvantages of MySQL and MariaDB. 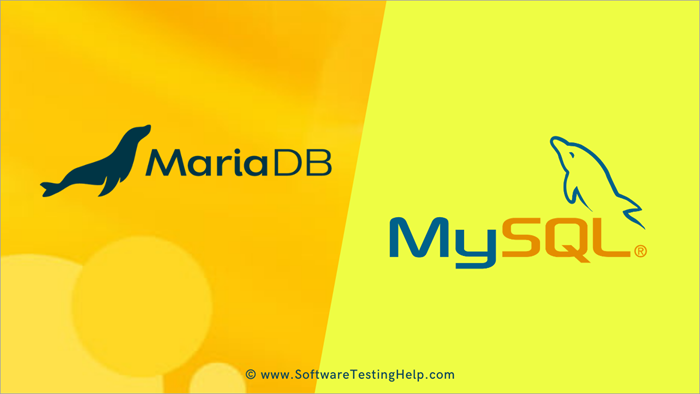 MySQL is a Swedish company. The name of the parent company that created this DB is MySQL AB. The first version of the software was launched in May 1995. Currently, MySQL is managed by Oracle.

Before Oracle took-over MySQL in January 2010, MariaDB was created by means of forking in October 2009. Hence, MariaDB uses the same code base as MySQL and is highly compatible. The parent company managing this DB is MariaDB Corporation AB and MariaDB Foundation.

We will now discuss some features of both systems. Though there might be a large set of features that shall be common across both of these databases, therefore the final decision to narrow down on any one of these depends on the specific requirements.

The wide-spread acceptability of a database on a variety of platforms is a mark of success. Here is the list of platforms that both the databases are acceptable on:

There are a variety of programming languages available in the world with each significant in its own way. The more and more languages supported by a database, the more are its chances to be used and expected by a larger developer community.

Let’s look at a few of the parameters that affect Security and Access Methods:

Replication is all about copying or replicating the data from one server to another or from one server to multiple other servers based on the business requirement. The purpose of this activity could be anything from taking back-ups, distribution of a load of processing incoming transactions, to addressing legal compliances, etc.

We could also use it for data analysis, which involves the execution of long-running and expensive queries which could hamper the database performance and impact batch processing and other online query executions.

There are different ways to replicate data. Let us explore how is done for these systems:

MariaDB and MySQL both support SQL to query the database and the tables. Hence, the coding standards are SQL-based standards in MariaDB and MySQL. As MariaDB is forked out of MySQL, you would find that MariaDB queries in almost all cases are exactly similar to MySQL queries.

Let us go through a few of the examples and comparisons of DML and DDL queries.

These improvements are either made to an existing feature of the system or could be an introduction of a new feature as per the business requirements. The developer community with its innovative ways and commitment ensures that the systems remain the most advanced and most relevant along with all the latest features.

As far as popularity is concerned, both the databases enjoy a huge following among the developer community. However, overall MySQL and MariaDB are ranked #2 and #12, respectively.

Following are a few disadvantages of MySQL DB:

Following are a few disadvantages of MariaDB:

Answer: MariaDB is forked out of MySQL. Hence, there are a lot of similarities in the architecture of the databases. Both the databases are RDBMS types of databases.

Answer: MariaDB is an open-source database of type RDBMS and is compatible with My-SQL for drop-in replacement of the MySQL database.

Q #3) Does Google use MariaDB?

Answer: Google is customizing the MariaDB v10 as per its needs.

Answer: MariaDB was designed to replace MySQL, but it has not replaced MySQL completely. Although it has provided a good option to MySQL.

Q #5) Can I have both MariaDB and MySQL onto my system?

Answer: Yes, one can have both the databases installed onto the system.

Q #6) Is MariaDB faster than MySQL?

Answer: Yes, MariaDB is swifter in processing transactions and can also handle over 200,000+ connections which over and above the capacity of MySQL.

In this MariaDB Vs MySQL tutorial, we have discussed a range of attributes of a database and used the same to compare MySQL against MariaDB. We can never say that MySQL is better than MariaDB or vice versa. However, based on your respective project requirement, one can conclude on which one to use. The above pros and cons would definitely help one make that decision.