As discussed in one of our previous tutorial Selenium grid helps to run our test cases in different operating systems and on different browsers.

However, this Docker Selenium Tutorial will explain to you more about what a Docker is and how we download, install, and integrate it with the Selenium grid along with concerned screenshots and this pictorial representation will enable you to understand the process quickly and easily too. 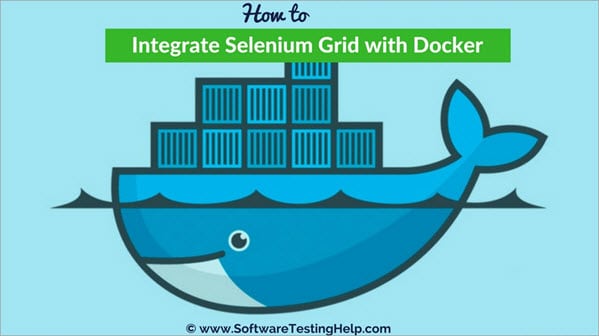 What is Selenium Grid?

One Practical Example of Usage of Selenium Grid

2-3 years ago China banned Google products in the country. At that time some other companies who developed web systems for China had to test their web system with different browsers except Google products (Google Chrome) such as Internet Explorer, Firefox, Opera, etc.

So at that time Selenium grid was very useful to those companies, as they used the Selenium grid for running their test cases in different browsers except Google Chrome.

In simple terms, Docker can be termed as a container. Developers or Docker users can put things like database, libraries, dependencies into that container, and then use those databases, dependencies, and libraries to create, deploy, and run applications.

By using Docker containers you can set up and pack a software application with all of the contents that are required to build that application, such as databases, libraries, and other dependencies, and finally, you can ship them all out as one package.

Docker was invented by Solomon Hykey and was launched into the software industry in 2013 March as an open-source tool. Nowadays, developers and system engineers are using Docker for several reasons.

In this tutorial, we are going to use Docker for software testing and software automation. 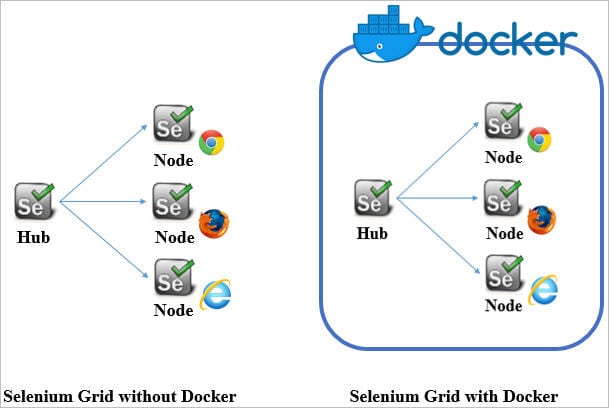 First of all, we need to set up an environment to run the Selenium script.

Given below are a few things we need to check:

After installing the Docker toolbox double-click and open the Docker quickstart terminal. Docker will configure your default machine with the IP Address: 192.168.99.100 and it will take some time to configure your local machine for the first time. Hence you have to wait until the following window appears.

While we configure the Selenium grid (without Docker), we also need to configure Selenium hub and nodes (browsers).

Hence the first thing is to install the hub and node images into the Docker.

Initially, we need to install five images to run our test using Docker.

Once you type the name and hit enter, you will be able to see the below window. 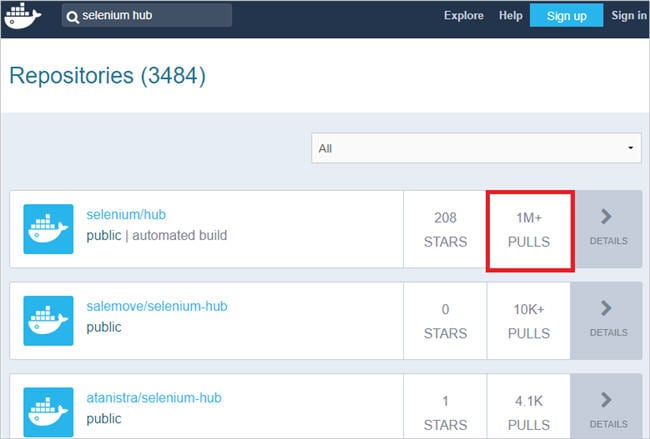 This window shows all the image repositories that we have for Selenium hub. Here you need to click the image that has the most number of pulls and it will help to run our code without any errors. Once you click on that image you will see another window like the one given below.

(Note: Click on any image for an enlarged view)

Hence initially, we have to install the Selenium hub image. To do that you need to copy the Docker pull command and paste it into the Docker quick start terminal as shown below. 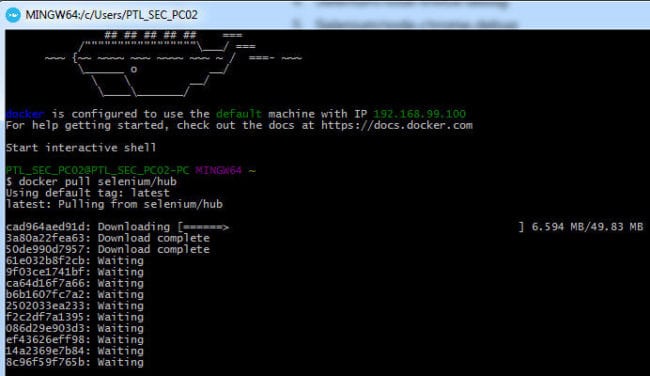 After entering each command into the Docker quick start terminal, you need to wait for some time to allow the images to download into your Docker container and the wait time completely depends upon the speed of your network connection. Sometimes some images will fail while installing or downloading and if it happens so then the best thing to do is to install that image again till the terminal shows as installation completed.

Another important factor is one should not type the second command before completing the download of the first command. It will fail both the download and the installation.

Likewise, you can search and install all the five images mentioned above in your Docker container.

The below table shows all the pull commands that you need to type into the Quickstart terminal and install.

After downloading all the images into your container you can check it using the below command.

Now all the images are downloaded successfully. Hence we can run those images one by one.

Once you type and enter that command in your terminal, the Selenium hub will be open from the Docker container. You can verify whether Selenium hub has started or not by checking the following link in your browser: http://192.168.99.100:4444/grid/console 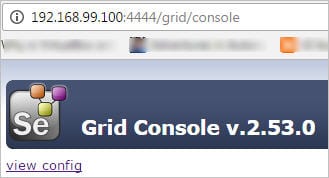 Now, let’s start with both the nodes one by one. Also, remember that you can run as many nodes as you wish. Here I have used two nodes only (chrome node and Firefox node).

For VNC viewer we need both the debug node of firefox and chrome. VNC (Virtual Network Computing) viewer helps us to view different browser actions at the same time on one computer. 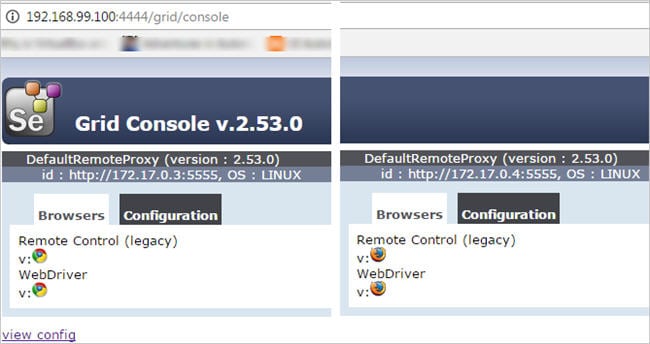 If any error occurs during the installation or running process of images, the best thing to do is to re-install and run that particular image again from Docker.

We have now completed all the steps in the Docker container side. Next, we need to give attention to the Selenium script and VNC viewer for doing our demonstration.

Firstly, we need to identify the port numbers of chrome and firefox debug nodes that are running. Because we require those port numbers for VNC viewer.

To identify the port numbers of chrome and Firefox node, you can type the below command in your quick start terminal and you will able to see all the Docker images and the running ports of each image under the PORTS column.

Now, we know the port numbers of chrome and firefox debug nodes that are running so we can start both the browsers using VNC viewer.

For that we need to follow the steps given below: 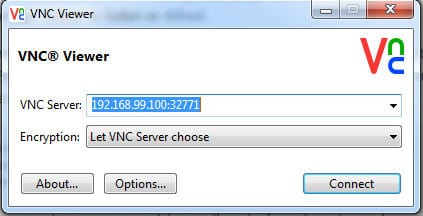 4) After clicking on the connect button VNC viewer will ask for a password. By default the password for VNC viewer is secret, type the password as secret and click Ok and you will be able to see a window for the chrome browser.

5) Likewise, you have to do the same for the Firefox browser by using a VNC viewer. Open the VNC application on your local computer and use Firefox running port number with the hub URL and click the connect button.

Again you will see another window opening for the Firefox browser.

Now both the browsers are shown up in the VNC viewer. Our next task is to write the selenium script and run it.

Here is the script that I created, this is a normal selenium script and I created two tests and have set the desired capability of those tests to two different browsers which we created. 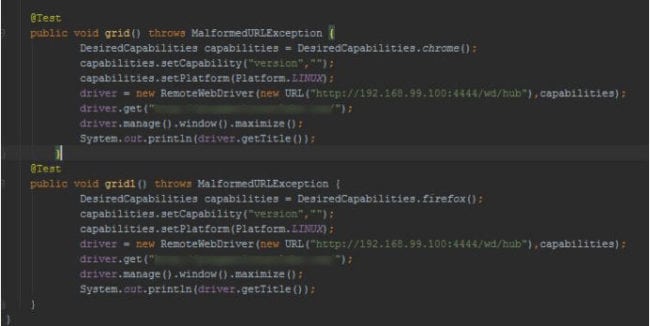 Also, I changed my XML file to run the test in a parallel way.

We have completed all the steps and you can run your test now. After running your test, you will be able to see the test running through two different browsers that we created using Docker.  VNC viewer will show how a browser navigates to each website at the same time. 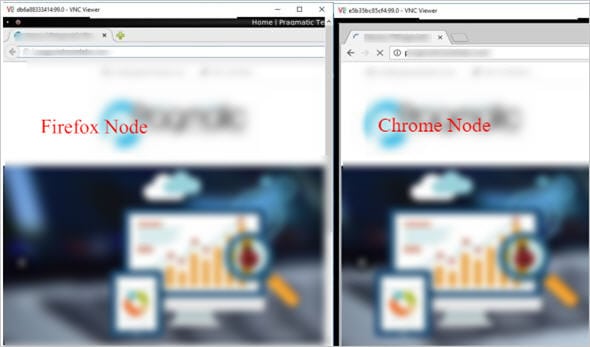 At times configuring the Selenium grid might be a high-cost involving and time-consuming process as we need multiple machines. Under such cases, the best option will be to use the Selenium Grid with Docker.

15 thoughts on “Docker Selenium Tutorial: How to Integrate Selenium Grid with Docker”