Docker is a containerization open-source platform that automates the deployment of applications inside containers.

Let’s look at it from the point of view of loading and unloading cargo vessels in a port. Docker helps to package the entire application with dependencies into a unit that enables better usage of resources and systems. 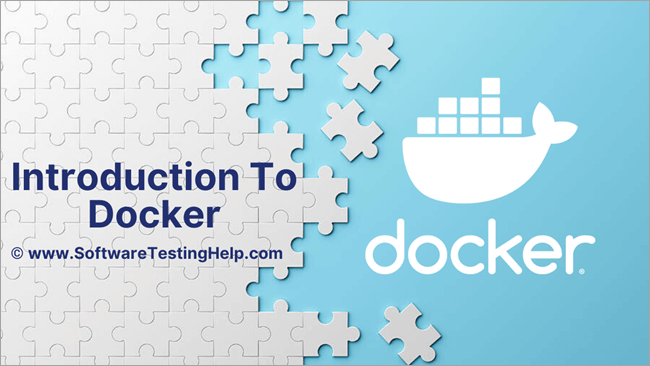 So the VM’s package the virtual hardware & the kernel and there is a computational overhead cost involved in virtualizing the hardware. With Docker, there is no need for extra hardware for the guest operating system. All apps run as Docker containers.

The below diagram shows the difference between VM’s and Container. 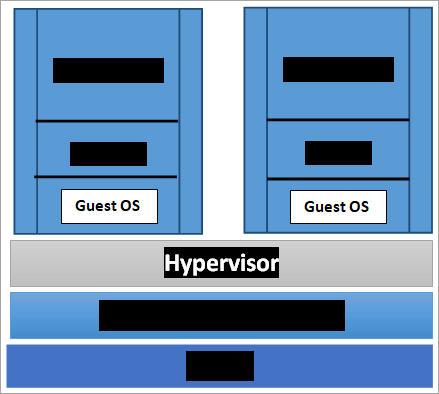 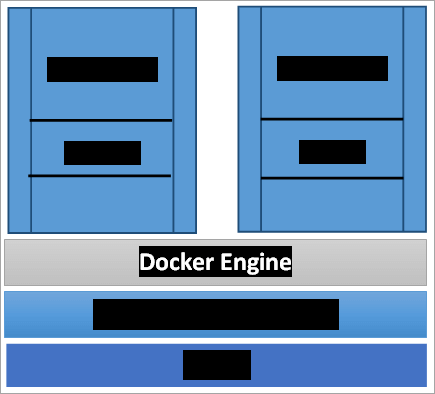 The following are the most common terminologies that are used in Docker.

Docker is available in 2 editions as shown below.

We will install the Community Edition using the below steps:

Optional: Remove the older versions of Docker. If not installed then proceed to the next step.

Run the docker version command to check for the success of installation and version details. 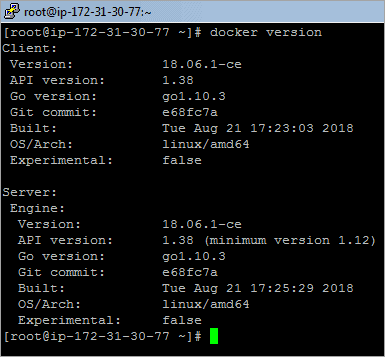 If the following error comes up, while running the above docker login command, then PROXY settings would be required. Normally every organization would have proxy servers to connect to the internet.

Follow the instructions in this URL to set up the proxy for HTTP or HTTPS protocols.

Docker Hub is a registry service on the Cloud that stores all the images which are manually built and also helps to download the images built by other users or organizations. 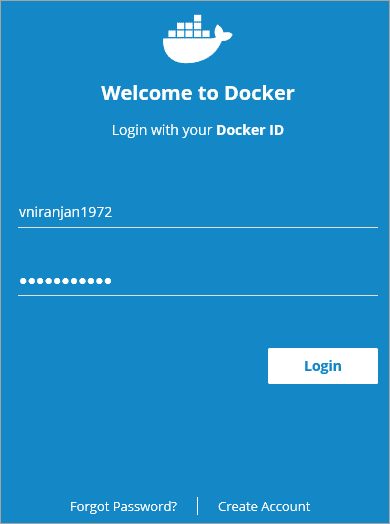 Once you have signed up, you will be logged in to the Docker Hub.

Once you have logged in to the Dockerhub you can create a public repository to store the Docker images (Images are explained in detail in the next section). Some of the pre-defined images like Jenkins, MongoDB, etc. are already available and we can create and upload our images.

We will use this Repository further in our article to push and pull images.

Once the Docker file is set up, you can use the Docker build command to build the image. We will see more about building images and Dockerfile in our upcoming sections.

Let’s run a pre-defined image which will create an instance of the image called a Container.

The Docker client contacts the Docker daemon and it pulls the pre-defined “hello-world” image from the Docker Hub and creates a new container from the image from which the executable is run thereby showing the output. 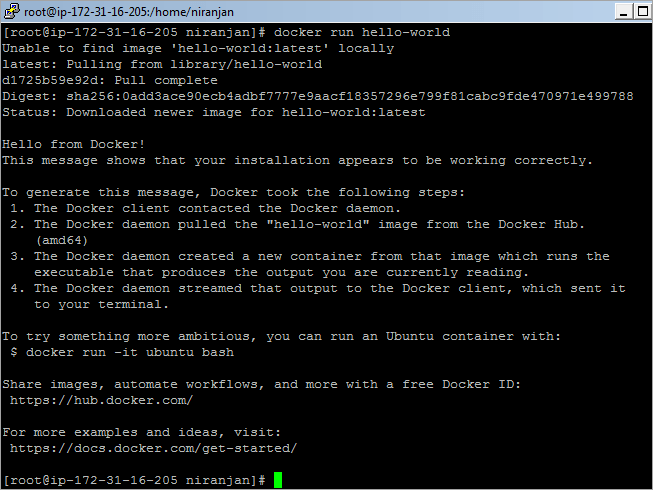 #1) To list all the Docker images installed on the system that is created by the BUILD command and also the ones downloaded from Docker Hub.

Every image contains a TAG (Label), Image ID to uniquely identify each image, the number of days since the image was created and the size.

#2) To remove the Docker images use the following command.

Use –f to force Remove the image if it is in use.

#3) To view the details of the Docker images run the following command. 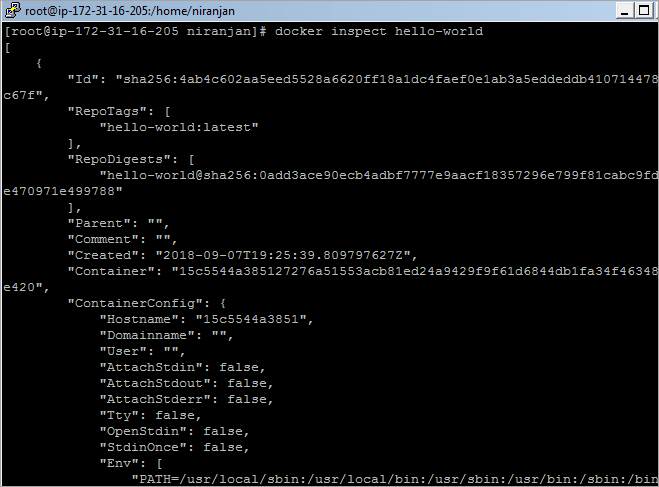 The above command will help to get the metadata of the image.

#4) To view all the commands that were run within an image use the Docker history command.

Containers are instances of the Docker images that we saw earlier. It is run using the Docker run command. The purpose of Docker is to run containers.

In the below screenshot we have an image called ‘hello-world’ and will issue a ‘run’ command as below. 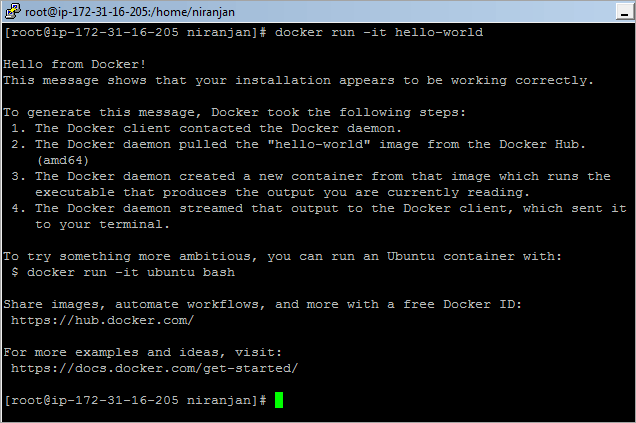 The -i and -t options that are used together, create the bash shell terminal inside the newly launched container. Docker Containers are uniquely identified with an ID and can be found by running the command as given below.

The –a switch will show all the containers in use and the stopped ones as well.

The above screen shows the name of the containers that are created randomly like trusting_morse, jovial_lichterman, etc. In case you need to name the container based on the project needs then you can do that using the –-name switch while we run the container.

(This command will show the name assigned to the container.)

Use the below command to delete the Docker container.

The Dockerfile is used to build the images. It is a simple text file consisting of instructions or commands.

As you are aware that the Docker Hub consists of a repository of images both pre-defined and custom ones uploaded. A Dockerfile is required to create a custom image.

Just follow the below 3 steps to create a custom Docker image.

#1) Dockerfiles start with a FROM instruction that helps to use a BASE image. If we need to use Java for running our application, then we can use the official image that is available i.e. java:8. The first line of the one that uses Java 8 version will be as follows.

#2) Typically in development, the files to be run or deployed could be placed in a target location.

For Example, if a developer is working on a file called HelloWorld.java and the file is saved in the location /root/javaproject/target then we will need to use the Docker ADD instruction to copy the files from the above source location and include it into the image.

There is a similar instruction called COPY which also has the same behavior as that of ADD. The only difference to use ADD instruction is in case you want to extract any TAR files into the image in addition to copying the files and directories to the destination folder.

An example of this could be as follows.

If the source is a TAR file then it will be extracted as the directory into the image.

If the source is URL, then the file will be downloaded and copied to the destination into the image.

#3) The next instruction that can be set anywhere is a non-executing one called MAINTAINER. It just declares an author. It should be defined after the FROM instruction.

#4) If there is a need to set the working directory before executing any command or executable then you can do it using the WORKDIR instruction.

#5) The next instruction that is mainly used to install a new application or package is RUN. It can also be used to execute any command. Usually, there will be multiple RUN instructions in the Dockerfile.

When an image is built and launched, the container uses CMD instruction to execute. Thus there is a default command that is set with the parameters and can be changed by passing the parameters from the command line when the Docker run command is issued.

#6) The next instruction is ENV that helps to set environment variables in the container.

In our previous section, we saw a few instructions that need to be put into the Dockerfile to build an image. In the format and example shown below the following command will help to build the image and we will see how to push the same to the Dockerhub. 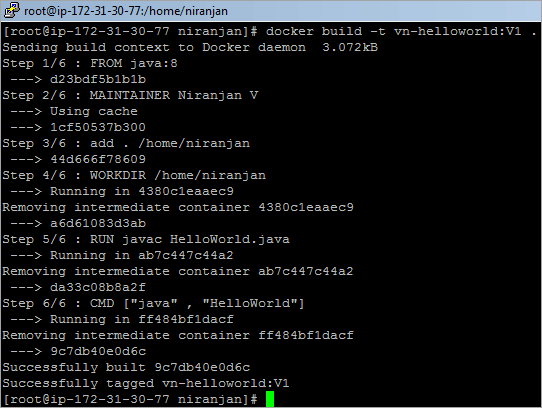 #1) Firstly TAG the imageID to the repository on Dockerhub.

#2) Issue the Push command. Make sure you log in to the Dockerhub using the ‘Docker login’ command before the command is run.

Login to the Dockerhub to view the pushed image.

Firstly we will run the Docker images command to list and see whether the image is existing or not.

The image vniranjan1972/demorepo:V1 is not existing locally on this machine or environment.

Now give the pull command and run the image. 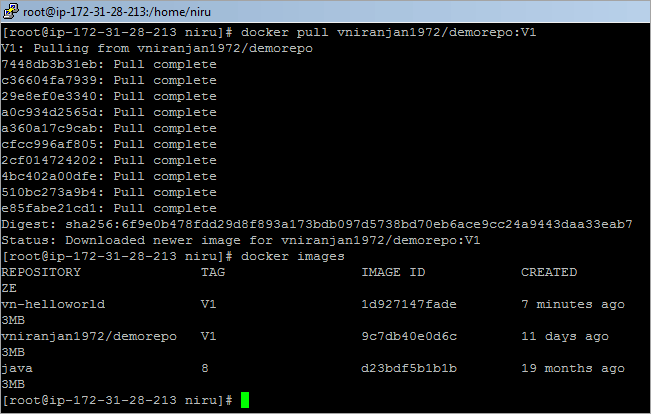 If we look at the list of containers (docker ps –a) then the above run image will be listed under the Exited containers. This is because the program has run and finished the execution.

Whereas the command docker ps will show only the running containers. An example of such running containers could be when Tomcat, Jenkins, JBoss has to be running. We will see the examples of running pre-defined images that will be used in the DevOps scenarios of CI and CD.

In this article, we have seen the fundamentals of Docker and how it is compared with VM’s. This part also concentrated on the installation and usage of docker especially on how to build images and run them in the containers.