How to Fix “Default Gateway Is Not Available” Error Message:

In this Hands-on Networking Training Series, we learned all about Network Address Translation in detail along with examples in our previous tutorial.

In this tutorial, we will discuss the concept of the default gateway and its role in the computer networking systems.

Many times while surfing on the Internet and exploring websites we encounter with an internet connection problem, and when we try to search the reason, we get a caution that the ”default gateway is not available” now let’s gain the knowledge on what does it mean and how to resolve it. 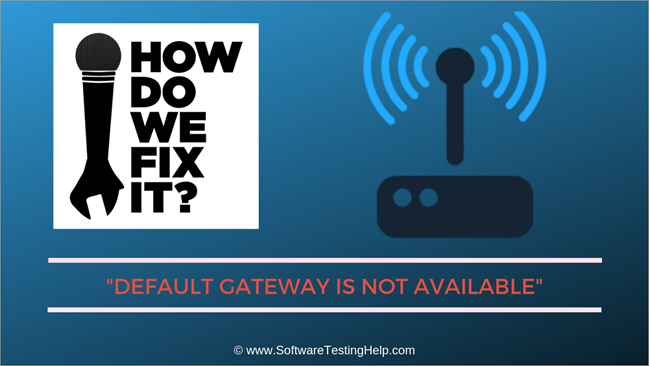 What is the Default Gateway?

Thus the default gateway will act as an access point to the other networks when one network wants to communicate or send data packets to another network. This also includes the alteration of IP addressing and subnet mask of the system and network topologies.

Suggested read =>> How to disable Yourphone.exe in Windows 10

Generally, each of the network components in any network maintains the routing table which will state on which of the port or interface the communication will take place, the set of rules to be followed and the route to be pursued to deliver the destined data packets in the network.

If the IP packet at some instance of the node doesn’t find the suitable set of rules and route to be followed to deliver the packet to the destination address, then it will choose the default gateway for the further routing process.

Thus the default gateway is itemized by a set of particular configurations which are known as the default route. In the small offices or home networks, the router which will link up the LAN network to the Internet behaves like a default gateway for all the network components.

How to Fix the Error

Solution 1: Remove any and all of the MacAfee programs from your PC.

One of the reasons for showing that “default gateway is not available” is the McAfee security program installed on the PC. Hence, to remove this problem go to the control panel of your PC, then click on programs, and select the programs and features option.

From this option go to add or remove program option and select McAfee and then completely uninstall it.

Recommended reading =>> How to uninstall McAfee from your system

After you uninstall this program, your issue will be resolved. To make your system virus-free, you can install some other security products.

By disabling and then enabling the Wi-Fi from the network and Internet sharing menu, you can fix the issue.

The steps involved are as follows:

You need to update the latest version of the network adapter drivers on your PC if you are getting the caption that “default gateway is not available”. This is one of the solutions but it doesn’t mean that it will surely resolve your issue.

Thus download the driver software from the authenticated site of your hardware manufacturer and then install it to your device.

If the automated search doesn’t get any suitable result, then manually search for the updated software and then download it. This will fix the issue.

Solution 4: Disable the auto-login feature on your Windows.

The auto-logon is a newly introduced feature of the windows account of the user that would repeatedly log in and this was being used before the shutdown of the PC.

This feature will conflict with the windows network settings feature and hence the “default gateway is not available” issue arises.

In order to fix it, disable the feature or you can put a password to log in so that every time when it boots up, it will require a password and will not automatically take it.

It is also one of the popular solutions to fix the “default gateway is not available” issue. You need to completely uninstall the network drivers from your computer. One should not be concerned about the effect of the non-existence of the drivers as when you reboot your system the windows will detect the drivers and reinstall them.

The steps included are as follows:

It is one of the lengthy and complicated processes of fixing “the default gateway is not available to issue”. In this process, we will exchange the network adapter drivers with some different set of drivers which are previously installed in the system.

Solution 7: Change the frequency of the Wireless Router.

The new generation router works on 5GHz frequency, but many times the adapter that you are using will not support this frequency. Hence change the frequency from 5GHz to 2.4GHz and this will resolve the gateway issue. The process of changing the frequency will be given in the router manual, thus one can go through the steps mentioned and make changes.

In this tutorial, we have understood the role of the default gateway in networking systems with examples.

Also read =>> How to fix your connection is not private error

We have also made an understanding of the solutions to fix the “default gateway is not available” issue with different screenshots.

We hope you enjoyed the entire range of tutorials in this networking series. We are sure that this series of tutorials would indeed be the best guide for any beginner or experienced person!!

Further reading =>> How to fix the DPC Watchdog Violation error