In previous tutorial, we learned about HTTP and DHCP Protocols in detail and we also learned more about the working of the protocols present at different layers of the TCP/IP model and the ISO-OSI reference model.

Here, we will get to know how to get access to distinctive networks and what kind of authentication process will be followed by the end users to reach a particular network and access its resources and services with the help of the security protocols. 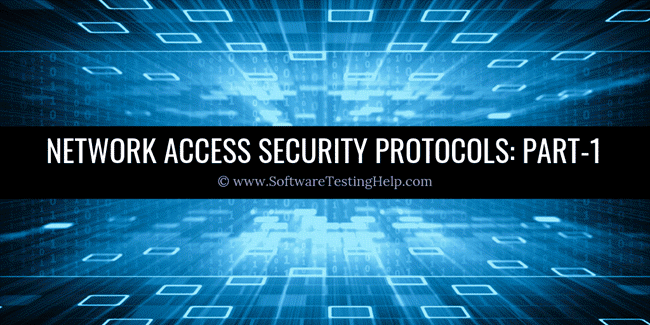 There are hundreds of standards and protocols for authentication, encryption, security, and network access. But here we are discussing only a few of the most popularly used protocols.

What is IP security (IPSec)?

IPSec is a security protocol which is used to provide security at the network layer of the networking system. IPSec authenticates and encrypts the data packets over an IP network.

There are two kinds of communication modes, i,e. transport, and tunnel mode. However, as transport mode is held back for point to point communication, the tunnel mode is most widely deployed.

In the tunnel mode, the new IP header is added in the data packet and it is encapsulated before we introduce any security protocol. In this, through a single gateway, multiple sessions of communications can be entertained.

The data flow in the tunnel mode is shown with the help of the below diagram. 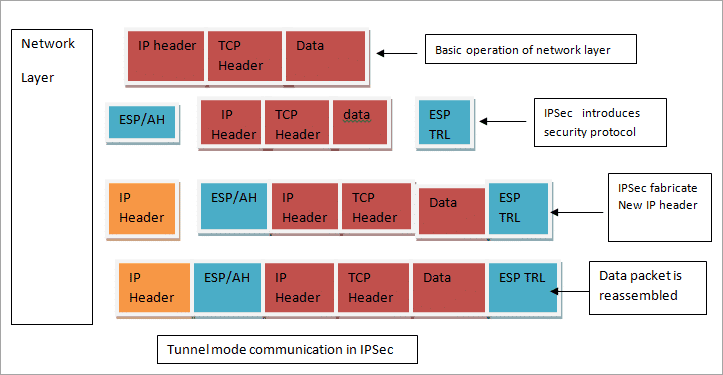 Authentication Header (AH): Its provisions the authentication by imposing AH into the IP data packet. The place where the header unit should be added is based on the mode of communication used.

The working of AH is based on the hashing algorithm and a classified key which can also be decoded by the end-user nodes. The processing is as follows:

Encapsulation Security Protocol (ESP): This protocol is capable of provisioning the security services which are not characterized by the AH protocol like privacy, reliability, authentication and replay resistance. The series of services granted depends upon the options chosen at the instance of SA initiation.

The process of ESP is as follows: 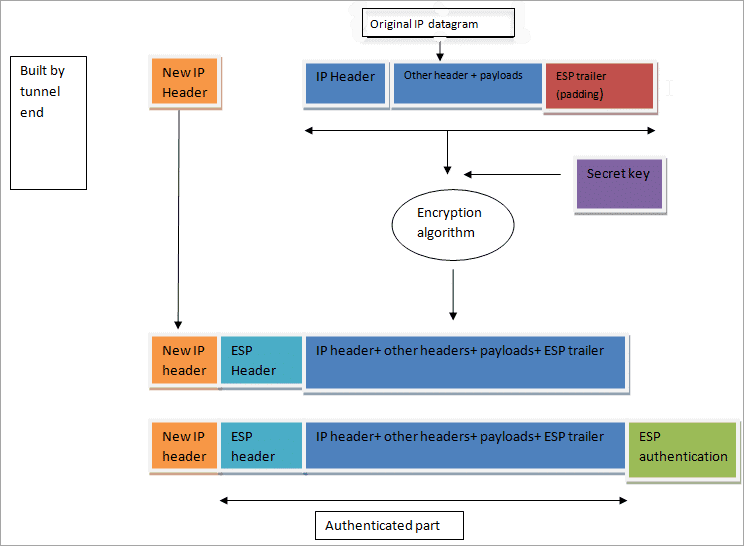 It is the oldest protocol for the authentication process. It was used in UNIX networks which permits a remote user to pass on the login username and password to an authentication server to evaluate the access granted to the client host or not in a system.

The protocol uses the port 49 of TCP or UDP by default and it permits the client host to acknowledge the username and password and forward a query to the TACACS authentication server. The TACACS server is known as TACACS daemon or TACACSD which finds out whether to allow and deny the request and reverts with a response.

On the basis of the response, the access is granted or denied and the user can log in by using dial-up connections. Thus the process of authentication is dominated by the TACACSD and is not very much in use.

Therefore TACACS is switch over by TACACS+ and RADIUS which are been used in most of the networks these days. TACACS uses the AAA architecture for authentication and distinct servers are used to complete each process involved in authentication.

TACACS+ works on TCP and connection-oriented protocol. TACACS+ encrypts the whole data packet before transmitting thus it is less prone to virus attacks. At the remote end, the secret key is used to decrypt the whole data into the original one.

This is a computer security architecture and various protocols follow this architecture for providing authentication.

The working principle of these three steps are as follows:

Authentication: It specifies that the user client who is requesting for a service is a bonafide user. The process is carried out by presenting credentials like a one-time password (OTP), digital certificate or via telephonic call.

Accounting: Accounting is deployed for management and planning purposes. It contains all the necessary information like when a particular service will start and end up, the identity of the user and the services used, etc.

The server will provide all the above services and deliver it to the clients.

AAA Protocols: As we know, in the past TACACS and TACACS+ were used for the authentication process. But now there is one more protocol known as RADIUS which is AAA based and is used widely all over in the networking system.

Network Access Server: It is a service component that acts as an interface between the client and dial-up services. It is present at the ISP end to provides access of internet to its users. NAS is also a solo point of access for remote users and also acts as a gateway to protect the resources of the network.

RADIUS Protocol: RADIUS stands for remote authentication dial-in user service. It is basically used for applications like network access and IP mobility. The authentication protocols like PAP or EAP are deployed to authenticate subscribers.

RADIUS works on the client-server model that operates on the application layer and uses TCP or UDP port 1812. The NAS which act as gateways to access a network includes both the RADIUS client as well as RADIUS server components.

The RADIUS works on AAA architecture and thus uses two packet-type message formats to accomplish the process, an access request message for authentication and authorization and accounting-request for supervising accounting.

Authentication and Authorization in RADIUS:

The RADIUS server examines the data using authentication methods like EAP or PAP. After confirming the credential information and other relevant data the server reverts back with this response. 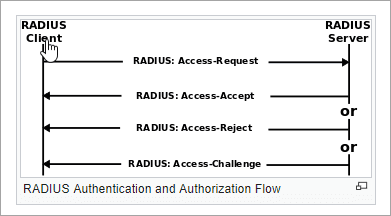 #1) Access reject: The access is rejected as the identity proof or login ID submitted is not valid or expired.

#3) Access-Accept: The access permission has been given to the end user. After the authentication of the user, the server on a regular interval of time examines whether the user is authorized to use the network services asked for. Based on the settings, the user may be allowed to access a particular service only and not the others.

Every RADIUS response also has a reply-message attribute which presents the reason for rejection or acceptance.

The authorization attributes like the user’s network address, type of service granted, the time duration of the session also pass on to the NAS after the access is granted to the user.

After the access is granted to the user to login into the network, the accounting part comes into the picture. To denote the initiation of user’s access to the network a RADIUS accounting request message which consists of ”start” attribute is sent by the NAS to the RADIUS server.

When the user wants to close the session, the NAS will publish a RADIUS accounting request message which consists of a “stop” attribute to stop the access to the network to the RADIUS server. It also provides the motive for disconnect and final usage of data and other services of the network.

In return, the RADIUS server sends the accounting response message as the acknowledgment to turn-off the services and terminates the access of the user to the network. 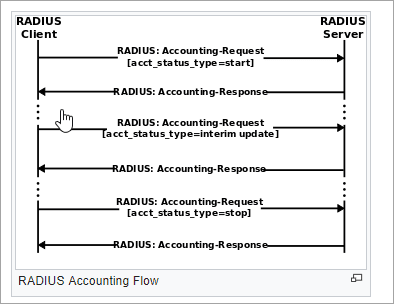 This part is mostly used for applications where statistics and data monitoring is required.

In the meantime, in between the flow of RADIUS request and response message attributes, the NAS will also send “interim-update” request attributes to the RADIUS server to update the network with some latest necessary data.

It is one of the basic standard protocols to control network access in a system.

The detailed working of this protocol is explained in the part-2 of this tutorial.

From this tutorial, we have learned how to get authentication, authorization and provisions security to the network with the help of the above-mentioned protocols.

We have also analyzed that these protocols make our networking system secure from unauthorized users, hackers and virus attacks and make an understanding of AAA architecture.

Deep knowledge on 802.1X protocol and 802.11i protocol which clearly specifies the fact on how the access of the user to a network can be controlled to provide only limited access to a classified network.