An Extensive Study of Network Troubleshooting with the Tools used.

We explored all about Network Security along with its types in our previous tutorial.

When we run a network or while working in any system there are always chances of failure in the smooth operation owing to technical, physical or any other faults.

For uninterrupted running of the system, we need to resolve the raised issues as soon as possible and for this, we need to detect the cause of the problem first and then fix it.

Must Read => Beginner’s Guide to Networking

Thus the process of detection, minimization and resolving the faults that arise in the network while performing the various day to day activities is known as troubleshooting.

Here we will explore the different kinds of troubleshooting steps and the tools we use for fault detection and closure of the same. 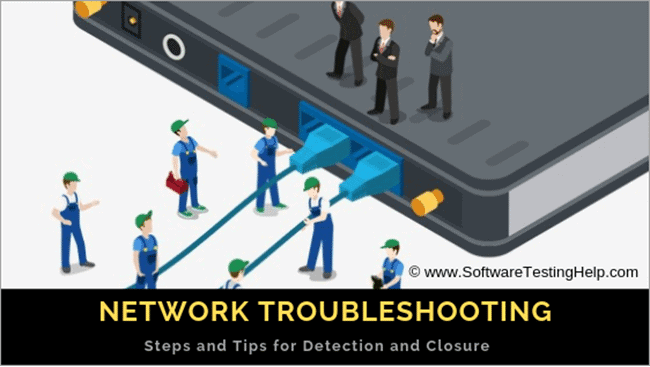 In this tutorial, we are only concerned about the computer networking fault diagnosis and rectification.

Based on the type of issue, we will discuss its troubleshooting steps and tips. 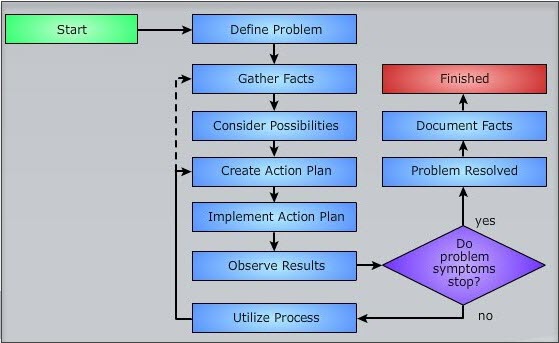 There are various tools that are used for checking the IP reachability issues and to locate where the packet is lost while communicating with the destination host. These tools make troubleshooting easier and minimize the time for restoration.

Some of the popular tools are mentioned below:

SolarWinds provides a network software, Engineer’s Toolset that contains over 60 tools. With the help of these tools, you will be able to automate network discovery. For automated network discovery, it has a set of tools like Port Scanner, Switch Port Mapper, SNMP sweep, IP Network Browser, etc.

This software has powerful diagnostic capabilities. It will perform real-time monitoring and alerting. It provides the features of IP address & DHCP scope monitoring, Configuration & log management, and enhanced network security.

Engineer’s Toolset can be integrated with SolarWinds Network Performance Monitor. The tool will help you to perform network stress tests with WAN Killer. According to your specifications, it will generate random traffic and will allow you to adjust packet size, bandwidth, and percentage of bandwidth.

SolarWinds offers a fully functional free trial for 14 days. Per seat license of Engineer’s Toolset will cost you $1495.

Obkio’s software application is designed for monitoring network performance and web applications and identifies the causes of common network problems like VoIP, video, and application slowdown.

Deploy Network performance monitoring Agents at strategic locations in your company’s offices or network destinations to easily identify the source of a system failure so you can quickly apply the corrective measures.

Obkio alerts you as soon as a problem occurs or even if there are signs that a failure is about to happen. Not only does it alert you and pinpoint the source of the issue, but it also allows you to go back in time to complete a diagnosis.

Auvik is a cloud-based platform for network management. It provides all the information on the network, across all sites through a single dashboard. It has capabilities for managing and monitoring multi-vendor network gear.

It has a facility for the automatic backup of config when there is a change. You can instantly restore the backup and get things back to normal. Traffic analysis tools will help you with finding anomalies faster. It sends notifications proactively based on pre-configured monitoring and alerts.

It has functionalities for automatic discovery of distributed IT assets, providing information on every device’s connection, insights into network configuration and its changes, network data encryption with AES-256.

Auvik offers a free trial for 14 days. There are two pricing plans: Essentials and Performance. You can get a quote for their pricing details.

By using IP ICMP echo request and echo reply messages, the PING tool verifies the reachability to the destination host at the remote end.

It contains two messages, first is, if the data packet is competent to send and receive the messages from the destination IP address and the second is the RTT time for the process (RTT means round trip time and is calculated in milliseconds).

The exclamation shows that ping is successful. If the ping returns saying the destination is unreachable then there are many reasons for this. To find out the cause, we will go for the next tool.

It sends the ICMP echo request messages with a step by step increase in the IP TTL (time to live) values.

The starting value is 1. It sends the data packet in a forward direction and each hop decreases the TTL value by 1 while routing the data and rejects the packet whose TTL value is zero by responding that the message ICMP time has exceeded.

Now again the source host sends the data packet, but this time with a TTL value of 2. In this way, the process will keep going until the packet has arrived at the destination and then the destination host reverts with ICMP echo reply messages.

With the help of traceroute, the router will keep a record of which route is followed by the packets to reach the destination and calculates the latency and other parameters as well.

It is an advanced tool for finding out the network issues.

It is the software that intercepts and records the data packet flow between the source and the destination. Like, if the system is running slow then it can check for the latency issues and other networking problems which will help in diagnosing the root cause.

In the TCP/IP protocol suite, if we are not able to reach at the destination IP address and not able to find the route to reach the next hop at any point in the network, then we will use PING and TRACEROUTE tools for troubleshooting the cause and location of the issue.

The generic steps to troubleshoot the IP related issues in the network include:

Once on the broad level, if you find that there is an issue in the LAN connectivity, then in order to locate the root cause and to resolve it, you should follow the below steps:

For rectifying the duplicate entry of an IP issue, disconnect the doubtful device from the LAN and also make the interface on which the device was connected shut down.

Now ping the device from some another device of the same subnet or LAN network. If the ping is OK,  then it indicates that the IP is being used by some other device as well on the network. From the ARP table of the device, find out its MAC address and modify the IP address according to planning.

But if the problem persists still, then there will be a physical connectivity or configuration issue in it.

The list of faults that come under this category are:

Let’s take a look at the above in detail.

If connections are found ok, then maybe the cable is faulty, so check the connectivity by replacing the existing cable with a newer one. Still, if the problem persists, then check the port or interface on which the link is terminated. There is a possibility for the port to be faulty.

#2) Port Faulty Scenario: Check that the port or interface on which the link is established is not shut down. Verify the duplex mode and speed as well. If the port is up and still the problem persists, then there are indicator lights that are present on each of the device to show the running status of the port.

#3) Traffic overload: If there is more traffic than the carrying capacity at a link or interface then at some point it will start behaving abnormally. Thus verify these criteria to ensure smooth running.

When we route the data packets in the network, then the chances for occurrences of fault are usual. Thus depending on the type of fault, we will prepare our plan for resolving the faults.

The kind of fault that occurs between the source and destination hosts while floating data packets in a network are listed below:

How to proceed for resolution:

A fault can arise due to the following reasons:

Depending upon the category of fault, we take the rectification steps.

#1) Whenever you connect your Tablet, mobile phone or Laptop with the WI-FI device, and if you are not able to connect then check all the LAN or WAN cable connections.

Further reading =>> How to resolve Connection Timed Out Error

The Ethernet cable should be connected tightly and check the light status on the device. If it is not green then the cable or port may be faulty. Thus change the port and cable connections with a newer one. 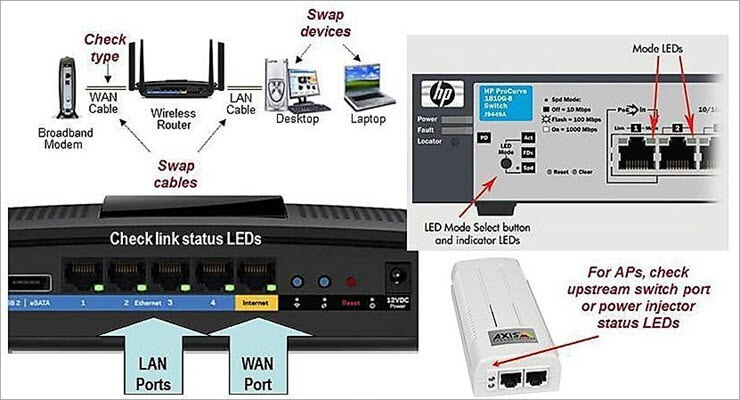 #2) After verification of all of the above points, if the connection is still not through, then verify the WI-FI network adaptor settings.

For windows laptop or PC, go to control panel, select the network connections option and check what is the status on the wireless network adaptor? It should be enabled. If it is not enabled then click on the enable key and mark the status as enabled.

Also, check if the airplane mode on a laptop or PC is disabled. If it is enabled, then it will not allow connecting with a wireless network. 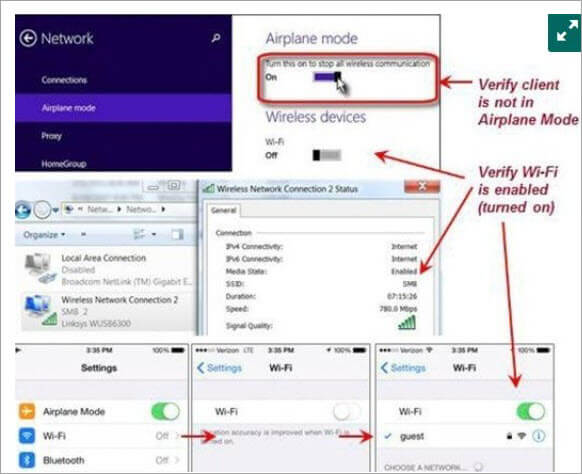 #3) After checking all the above settings, if the status is still not connected then check the wireless access point and SSID settings. After correction of the desired settings, the status will change from not connected to acquiring network address to connected. At this point, the client also allocates the IP address to the requesting device. 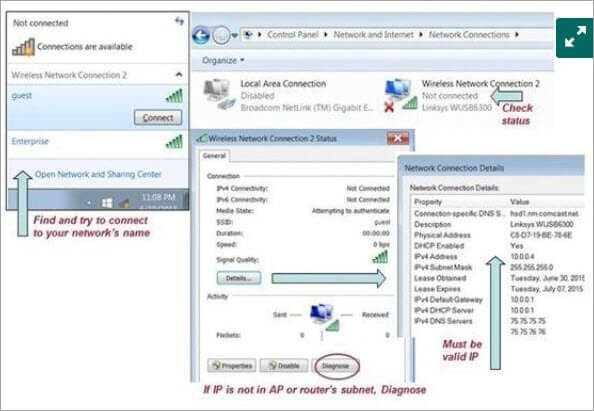 #4) If still, the problem persists, then click on the diagnose option from the wireless network connection status menu to find out the cause.

#5) After performing all the above troubleshooting steps, if you are not able to connect to the network still, then there may be other reasons like some firewall or packet filter is barring you for using the network, and there could be a problem with the authentication protocol used etc.

#6) To resolve these issues, reconfigure all the network settings and verify the IP reachability by using PING.

These are the basic troubleshooting steps. If you are still not able to connect to the network, then you can restart your system and then try to connect and consult with some network settings expert.

The different kinds of fault categories that we counter within the networking systems is explained here in this tutorial.

We came to know that an issue can occur from the bottom layer to the top layer of the TCP/IP model and can be due to a physical connectivity issue, LAN issue, IP related issue or any routing related faults.

Based on the category of the issue, we take measures to locate and rectify them. Only the generic and basic troubleshooting steps of the networking system are explained. As it is a very vast topic, several other kinds of faults and newer faults can arise in any network at any time.

But as a beginner, it is important to understand the above-defined troubleshooting steps for ruling out the issue at the ground level.