It uses early Ethernet technology to overcome collision when it occurs.

This method organizes data transmission properly by regulating communication in a network with a shared transmission medium.

This tutorial will give you a complete understanding of Carrier Sense Multiple Access Protocol. 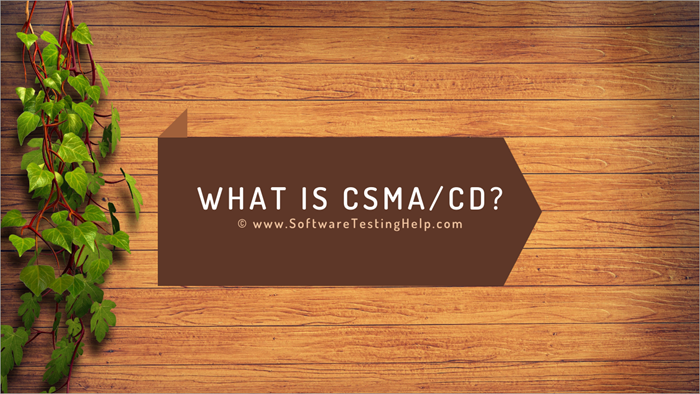 CSMA/CD, a MAC process protocol, first senses for any transmissions from the other stations in the channel and starts transmitting only when the channel is clear to transmit.

As soon as a station detects a collision, it stops transmission and sends a jam signal. It then waits for some time period before retransmitting.

Let’s understand the meaning of the individual component of CSMA/CD.

CSMA/CD procedure can be understood as a group discussion, where if the participants speak all at once then it will be very confusing and the communication will not happen.

Instead, for good communication, it is required that the participants speak one after another so that we can clearly understand the contribution of each participant in the discussion.

Similar is the process of CSMA/CD, where the data packet transmission is only done when the data transmission medium is free. When various network devices try to share a data channel simultaneously, then it will encounter a data collision.

When no other station tries to send the data and there is no data collision detected, then the transmission of data is said to be successful.

The algorithm steps include: 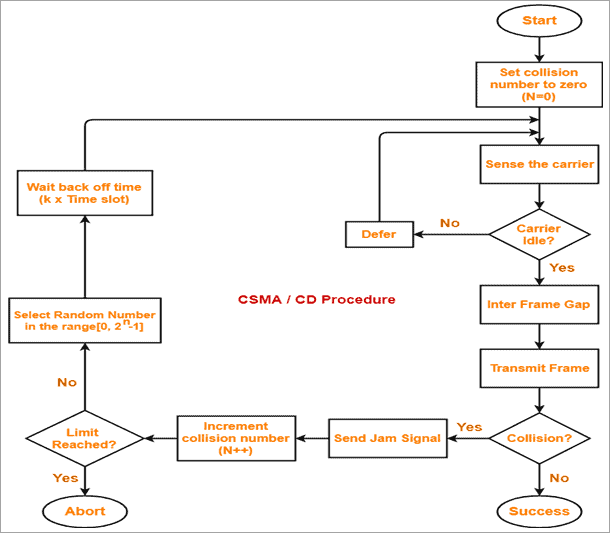 How Does CSMA/CD Work

To understand the working of CSMA/CD, let’s consider the following scenario.

So, the question that arises here is: how will the stations know that their data got collided?

The answer to this question is, if the colloidal signal comes back during the process of transmission, then it indicates that the collision has occurred.

For this, the stations need to keep on transmitting. Only then they can be sure that it’s their own data that got collided/corrupted.

If in case, the packet is large enough, which means by the time the collision signal comes back to the transmitting station, the station is still transmitting the left part of data. Then it can recognize that its own data got lost in the collision.

In order to detect a collision, it is important that the station keeps on transmitting the data until the transmitting station gets back the collision signal if any.

Let’s take an example where the first bits transmitted by the station is involved in the collision. Consider we have four stations A, B, C and D. Let the propagation delay from station A to station D be 1 hour i.e. if the data packet bit starts to move at 10 a.m., then it will reach D at 11 a.m.

Therefore, for the respective stations to detect that it’s their own data that got collided the transmission time for both the stations should be greater than their propagation time. i.e. Tt>Tp

Where Tt is the transmission time and Tp is the propagation time.

This is the condition for detecting collision in the worst case where if a station wants to detect collision then it should keep on transmitting the data till 2Tp, i.e. Tt>2*Tp.

Now the next question is if the station has to transmit the data for at least 2*Tp time then how much data should the station have so that it could transmit for this amount of time? 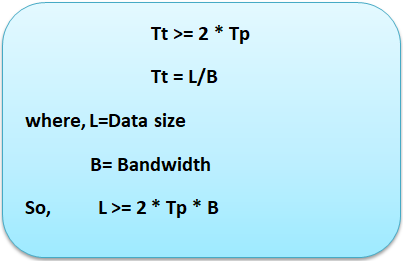 So in order to detect a collision, the minimum size of the packet should be 2*Tp*B.

The below diagram explains the Collision of first bits in CSMA/CD:

Station A,B,C, D are connected through Ethernet wire. Any station can send its data packet for transmission after sensing the signal as idle. Here the data packets are sent in bits which take time to travel. Due to this, there are chances of a collision.

Thus, the transmission time for station C becomes t3-t2. After the collision, the carrier will send back the colloidal signal to station A which will reach at time t4. This means, while sending the data, the collision can also be detected.

Having seen the time durations for the two transmissions, refer to the below figure for a complete understanding.

CSMA/CD was used in shared media Ethernet variants(10BASE2,10BASE5) and in the early versions of twisted pair Ethernet that used repeater hubs.

But nowadays, modern Ethernet networks are built with switches and full-duplex connections so that CSMA/CD is no longer used.

Answer: In full-duplex mode, communication is possible in both directions. So there are least or in fact no chance of collision and thus no mechanism like CSMA/CD find its use on a full-duplex.

Answer: CSMA/CD is not often used anymore as switches have replaced hubs and as switches are being used, no collision occurs.

Answer: It is basically used on half-duplex Ethernet technology for local area networking.

Q #4) What is the difference between CSMA/CD and ALOHA?

Answer: The main difference between ALOHA and CSMA/CD is that ALOHA does not possess the feature of carrier sensing like CSMA/CD.

Q #5) How does CSMA/CD detect collision?

Answer: CSMA/CD detects collisions by sensing transmissions from other stations first and starts transmitting when the carrier is idle.

Q #6) What is the difference between CSMA/CA & CSMA/CD?

Answer: CSMA/CA is a protocol that is effective before collision whereas CSMA/CD protocol comes into effect after collision. Also, CSMA/CA is used in wireless networks but CSMA/CD works in wired networks.

Answer: Its main purpose is to detect collisions and see whether the channel is free before a station starts transmission. It allows transmission only when the network is free. In case the channel is busy, then it waits for some random amount of time before transmitting.

Answer: Switches no longer use CSMA/CD protocol as they work on full duplex where collision does not occur.

Answer: No, wifi does not use CSMA/CD.

So from the above explanation, we can conclude that the CSMA/CD protocol was implemented in order to minimize the chances of collision during data transmission and improve performance.

If a station can actually sense the medium before using it then the chances of collision can be reduced. In this method, the station first monitors the medium and later sends a frame to see if the transmission was successful.

If the medium is found busy then the station waits for some random amount of time and once the medium becomes idle, the station starts the transmission. However, if there’s a collision, then the frame is sent again. This is how CSMA/CD handles collision.