In this Complete Networking Training Series, we saw in detail about LAN Vs WAN Vs MAN in our previous tutorial.

In this tutorial, we will learn and explore the need for IP addressing in a computer networking system.

IP addressing is used to recognize the host of a network and uniquely identify a particular device of the Network.

Whereas subnetting is used in combination with IP addressing to develop several logical addressing that exists within a single network. 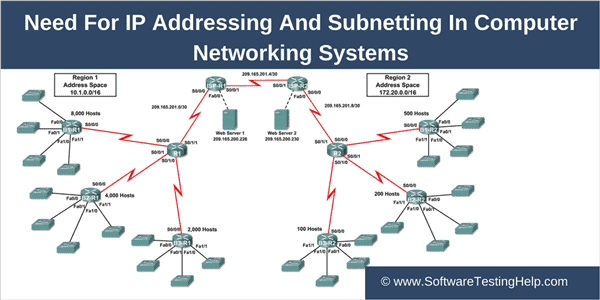 We will see the different classes of a Network along with their roles and significance in computer networking. In our daily life, we human beings identify each other with our names, similarly, the routers and switches recognize their neighboring device and network with an IP address and a subnet mask.

The overall phenomenon of logical addressing works on the Layer-3 of the OSI reference model and the network components like routers and switches are the host devices that are most popularly used.

An IP Address is a 32-bit logical address that distinctively classifies a host of the network. The host can be a computer, Mobile handset or even a tablet. The 32 bits binary IP address is made up of two distinctive parts i.e. The Network address and the Host address.

It also has 4 octets as each octet is having 8 bits. This octet is converted into decimal and is separated by a format i.e. dot. Thus it is represented in a dotted-decimal format. The range of an octet in binary is from 00000000 to 11111111 and in decimal from 0 to 255.

Example of an IP Address format:

The binary one is difficult to memorize thus, in general, the dotted decimal format is used worldwide for representation of the logical addressing.

Let’s understand in detail how the binary octet values are converted into decimal values:

So the value of each bit is as follows:

Thus the result would be:

Suppose all the bits of an octet is not 1. Then see how we can calculate the IP address:

By combining the bits of the octets in different combinations according to the need, we can derive the overall IP address of the desired network. As per the requirement, these are divided into various classes of a network called as class A, class B, class C, class D, and class E.

Most popularly class A, B and C are used for commercial purposes and class D and E have reserved rights.

The organization which governs the internet has divided the IP addresses into different classes of the network.

The classification is shown with the help of the below table and figure. 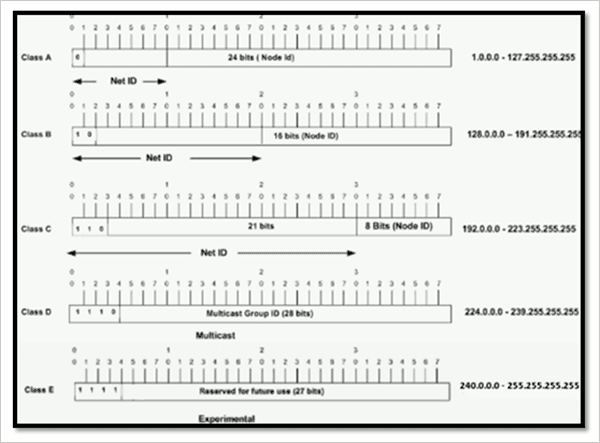 Below table will show the masks that can be drawn on with Class C networks.

We have studied about the network class and subnet mask phenomenon of computer networking. Now let’s see how the mask will help us to classify the network ID and host ID part of an IP address.

Let us assume the case of a class A IP address:

#1) Convert this Combination into a binary value:

Subnetting allows us to create various sub-networks or logical networks within one network of a particular class of the network. Without subnetting, it is almost unrealistic to create big networks.

For constructing a big networking system, every link must have a unique IP address with every device on that linked network which is being the participant of that network.

With the help of a subnetting technique, we can split the large networks of a particular class (A, B or C) into smaller subnetworks for inter-connection between each node which are situated at different locations.

Each node on the network would have a distinctive IP and subnet mask IP. Any switch, router or gateway that connects n networks has n unique Network ID and one subnet mask for each of the network it interconnects with.

The formulae of subnetting is as follows:

The formulae of a number of hosts per subnet is as follows:

Now let’s understand the overall process with the help of an Example:

We have taken an example of Class C network ID with a default subnet mask.

Thus the number of bits are 8+8+8+0= 24 bits. As mentioned earlier, for subnetting in class C network, we will borrow bits from the host portion of the subnet mask.

Therefore, to customize the subnet as per requirement:

From the above binary notation, we can see that the last 3 bits of the last octet can be used for host ID addressing purpose.

Now the IP addressing scheme is as follows:

With the help of the above example, we can clearly see, how subnetting helps us to construct inter-networking between various links and nodes of the same subnetwork. All these above IP’s can be used for inter-networking the devices within the overall network.

Note: Subnet mask is most widely used everywhere in a computer networking system. Hence, there is one more method to represent the subnet mask of a particular network which is chosen and standardized as it is easy to denote and memorize.

From the decimal notation we can calculate the number of bits having 1 in each octet:

Thus the Subnet mask can be denoted as /29.

From the above notation, anyone who knows the standard notation and formulae of subnetting can understand that the IP is using a subnet mask of 255.255.255.248 or /29.

The different Subnetting scheme in binary and decimal notation is shown below:

The ‘/’ notation method of the subnet mask is most widely used as it is easy to memorize and the binary notation and decimal are very lengthy in size.

As we are denoting the mask scheme while interconnecting the network components through the figure, if we use the decimal and binary method then the overall diagram will become very complex and difficult to understand.

There are so many IP’s on the platform to be shown and it becomes difficult to memorize as well. Thus generally, people who are familiar with routing and IP addressing scheme use short notation methods in figures and diagrams.

Understanding Subnetting with an Example of Interconnection of Network Devices:

The above figure shows how subnetting is used for interconnection of subnetworks. Firstly, as per our need for the number of hosts required to be connected and meet the other requirements of the network, we customize the subnet mask and network ID accordingly and assign to the devices thereafter.

The above network is using class C network mask and /29 subnet mask means network IP can be divided into 8 subnets. Each router has a unique IP address for each linked subnetwork.

There is an important point to be noticed that the more the bits we carry from the subnet mask for host ID then the more will be the subnets obtainable for the network.

The above table shows the details of the number of subnets and hosts that can be connected per subnet mask by using Class B subnetting Scheme.

For connecting a host in big quantity and WAN communication systems, the Class B subnetting is very effective as it gives a wide range of IP’s for configuration.

What Is IP Subnet Calculator?

As mentioned in detail above the concept of IP addressing and subnetting, the subnets and supernet networks are derived from a big network to create small networks for interconnection of various network devices, situated far apart with each other and assigning the unique IP address and subnet mask to them for communication with each other.

The IP calculator will give output for the value of broadcast IP address, usable IP range of the host devices, subnet mask, IP class and the total number of hosts by entering the subnet mask and the IP address of the particular network as the input value.

The IP calculator gives the result for both IPV4 and IPV6 network protocol classes of networks.

Why Is IP Calculator Needed?

There are different classes of networks that are used for networking systems and out of those for commercial purposes the class A, B and C are most widely used.

Now let us understand the need for an IP calculator with the help of an example. If we need to calculate the host range, broadcast IP, etc.

Then we can manually calculate it as by the mathematical formulae which we have explained earlier in this tutorial.

The whole procedure of calculating this manually is lengthy.

Example # 2: Calculating the same parameters for subnetting for the class A network IP.

Thus for calculating the network parameters in such a kind of huge networks, the subnet calculator is designed. It is basically a software tool and calculates the desired value automatically by just entering some basic parameters like network IP and subnet mask.

The output is more precise, accurate and for the user who is constructing the subnets and supernets from the one big network and is also time-saving.

Also, it is very easy and simple to use and is mostly used in the case of class A and class B networks as here the no. of usable IP and host range is in from thousands to millions.

Now see how we can get this from the tool with the help of the below set of screenshots in three parts as the result is very large. 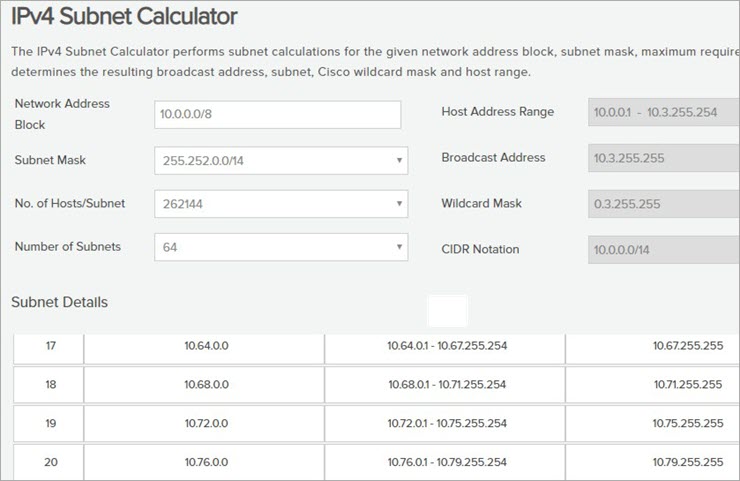 Example #3: Class B network for calculating the broadcast address, the number of usable hosts, number of subnets, etc. by using this tool.

Please find the outcome with the help of the below set of screenshots in three parts as the result is very long.

Thus with the help of the above examples, we can get the subnet details as per our requirements.

The below table demonstrates the various IPV4 subnet details: 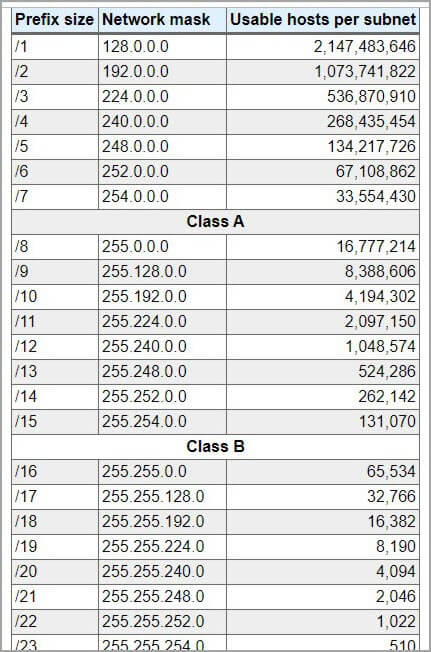 In this tutorial, we have learned the need for IP addressing and Subnetting in the computer networking systems, with the help of different examples.

The IP addressing scheme and Subnetting are the building blocks in defining the subnetworks and IP’s within a large network.

The different formulas we have used will help us in determining the hosts that we can connect in a particular network and how also enable us to know how a huge network can be divided into many smaller networks for easier communication.