What is OSI Model: A Complete Guide to The 7 Layers of the OSI Model

In this Free Networking Training Series, we explored all about Computer Networking Basics in detail.

The ISO (International organization for standardization) has developed this reference model for communication to be followed worldwide on a given set of a platform. 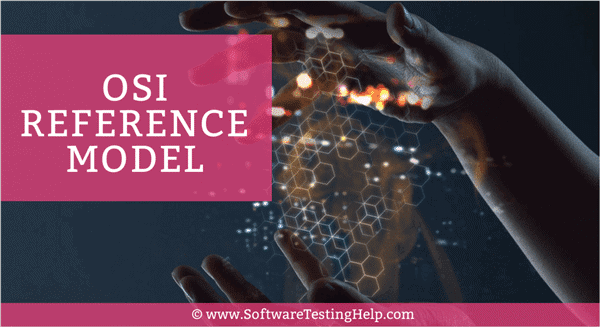 What Is OSI Model?

In this tutorial, we will take an in-depth look at the functionality of each layer.

As a software tester, it is important to understand this OSI model as each of the software applications works based on one of the layers in this model. As we dive deep in this tutorial, we will explore which layer it is.

Architecture Of The OSI Reference Model 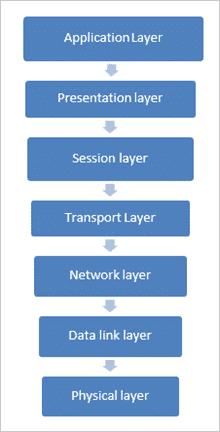 Relationship Between Each Layer

Let’s see how each layer in the OSI reference model communicates with one another with the help of the below diagram. 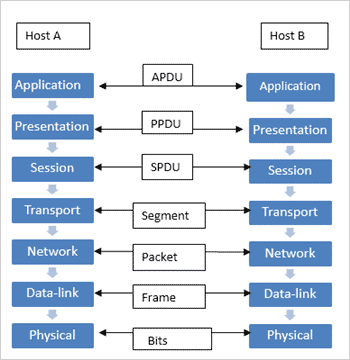 Enlisted below is the expansion of each Protocol unit exchanged between the layers:

Roles & Protocols Used At Each Layer 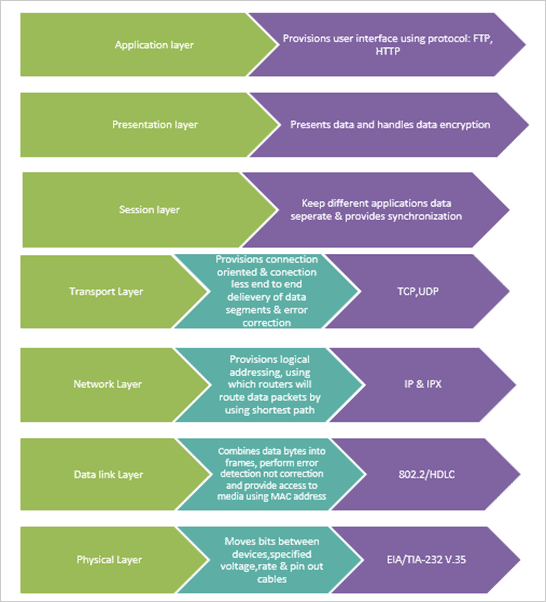 Features Of The OSI Model

The various features of the OSI Model are enlisted below:

7 Layers Of The OSI Model

Before exploring the details about the functions of all 7 layers, the problem generally faced by first-timers is, How to memorize the hierarchy of the seven OSI Reference layers in sequence?

Here is the solution which I personally use to memorize it.

Try to remember it as A- PSTN- DP.

Here are the 7 Layers of the OSI Model: 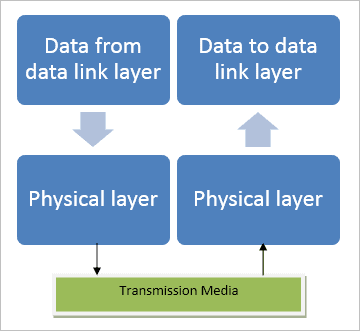 The structure of MAC address representing the various fields and bit length can be seen below.

There are two types of flow control process:

Stop and Wait for flow control: In this mechanism, it pushes the sender after the data is transmitted to stop and wait from the receiver’s end to get the acknowledgment of the frame received at the receiver end. The second data frame is sent over the medium, only after the first acknowledgment is received, and the process will go on.

Sliding window: In this process, both the sender and the receiver will decide the number of frames after which the acknowledgment should be exchanged. This process is time-saving as fewer resources are used in the flow control process.

The network layer is the third layer from the bottom. This layer has the accountability to accomplish the routing of data packets from the source to destination host between the inter and intra networks operating on the same or different protocols.

Apart from the technicalities, if we try to understand what it really does?

The answer is very simple that it finds out the easy, shortest, and time-efficient way out between the sender and the receiver to exchange data using routing protocols, switching, error detection and addressing techniques. 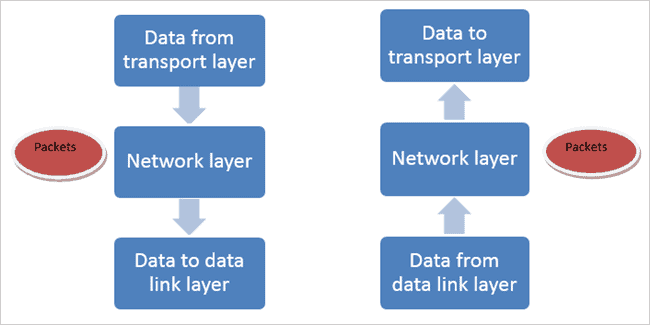 Example for combined usage of IP address & subnet mask is shown below:

Thus by using subnetting, the layer-3 will provide an inter-networking between the two different subnets as well.

At the receiving end, it again reassembles them to the original size, thus becoming space efficient as a medium less load. 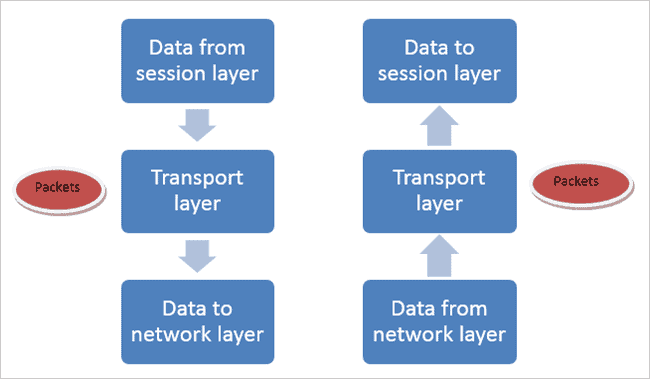 The fourth layer from the bottom is called the transport layer of the OSI Reference model.

(i) This layer guarantees an end to end error-free connection between the two different hosts or devices of networks. This is the first one which takes the data from the upper layer i.e. the application layer, and then splits it into smaller packets called the segments and dispenses it to the network layer for further delivery to the destination host.

It ensures that the data received at host end will be in the same order in which it was transmitted. It provides an end to end supply of the data segments of both inter and intra sub-networks. For an end to end communication over the networks, all devices are equipped with a Transport service access point (TSAP) and are also branded as port numbers.

A host will recognize its peer host at the remote network by its port number.

TCP is a connection-oriented and reliable protocol. In this protocol, firstly the connection is established between the two hosts of the remote end, only then the data is sent over the network for communication. The receiver always sends an acknowledgment of the data received or not received by the sender once the first data packet is transmitted.

After receiving the acknowledgment from the receiver, the second data packet is sent over the medium. It also checks the order in which the data is to be received otherwise data is re-transmitted. This layer provides an error correction mechanism and flow control. It also supports client/server model for communication.

UDP is a connectionless and unreliable protocol. Once data is transmitted between two hosts, the receiver host doesn’t send any acknowledgment of receiving the data packets. Thus the sender will keep on sending data without waiting for an acknowledgment.

This makes it very easy to process any network requirement as no time is wasted in waiting for acknowledgment. The end host will be any machine like a computer, phone or tablet.

This type of protocol is widely used in video streaming, online games, video calls, voice over IP where when some data packets of video are lost then it doesn’t have much significance, and can be ignored as it doesn’t make much impact on the information it carries and doesn’t have much relevance.

(iii) Error Detection & Control: Error checking is provided in this layer because of the following two reasons:

There is no assurance that all the links between the source and destination will provide error scrutiny. One of the links may be using a link layer protocol which doesn’t offer the desired outcomes.

The methods used for error check and control are CRC (cyclic redundancy check) and checksum.

If the remainder comes up to zero then the data component is allowed to pass to forward the protocol, else, it is assumed that the data unit has been distorted in transmission and the packet is discarded.

Checksum Generator & checker:  In this method, the sender uses the checksum generator mechanism in which initially the data component is split into equal segments of n bits. Then, all the segments are added together by employing 1’s complement.

Later, it complements once again, and now it turns into checksum and then is sent along with the data component.

Upon receiving the data unit, the receiver divides it into n equal size segments. All the segments are added using 1’s complement. The result is complemented once more and If the result is zero, the data is accepted, else discarded.

This error detection & control method permits a receiver to rebuild the original data whenever it is found corrupted in transit.

This layer permits the users of different platforms to set up an active communication session between themselves.

The main function of this layer is to provide sync in the dialogue between the two distinctive applications. The synchronization is necessary for efficient delivery of data without any loss at the receiver end.

Let’s understand this with the help of an Example.

Assume that a sender is sending a big data file of more than 2000 pages. This layer will add some checkpoints while sending the big data file. After sending a small sequence of 40 pages, it ensures the sequence & successful acknowledgment of data.

If verification is OK, it will keep repeating it further till the end otherwise it will re-synchronize and re-transmit.

This will help in keeping the data safe and the whole data host will never completely get lost if some crash happens. Also, token management, will not allow two networks of heavy data and of the same type to transmit at the same time.

As suggested by the name itself, the presentation layer will present the data to its end users in the form in which it can easily be understood. Hence, this layer takes care of the syntax, as the mode of communication used by the sender and receiver may be different.

It plays the role of a translator so that the two systems come on the same platform for communication and will easily understand each other.

It also performs data compression for multimedia data before transmitting, as the length of multimedia data is very big and much bandwidth will be required to transmit it over media, this data is compressed into small packets and at the receiver’s end, it will be decompressed to get the original length of data in its own format.

This is the topmost and seventh layer of the OSI reference model. This layer will communicate with the end users & user applications.

This layer grants a direct interface and access to the users with the network. The users can directly access the network at this layer. Few Examples of services provided by this layer include e-mail, sharing data files, FTP GUI based software like Netnumen, Filezilla (used for file sharing), telnet network devices etc.

There is vagueness in this layer as is not all user-based information and the software can be planted into this layer.

Therefore irrespective of the software used, it is the protocol used by the software that is considered at this layer.

Software testing programs will work on this layer as the application layer provides an interface to its end users to test the services and their uses. The HTTP protocol is mostly used for testing at this layer but FTP, DNS, TELNET can also be used as per the requirement of the system and network in which they are operating.

From this tutorial, we learned about the functionalities, roles, inter-connection, and relationship between each layer of the OSI reference model.