All About HTTP (Hypertext Transfer Protocol) and DHCP (Dynamic Host Configuration Protocol): A Detailed Study of the Most Commonly Used Application Layer Protocols

In our previous tutorial, we had an In-depth look at DNS, SMTP, FTP and MIME protocols with some examples.

In this tutorial, we will explore a few other most commonly used application layer protocols. All that you need to know about HTTP and DHCP are explained in simple terms for your easy understanding. 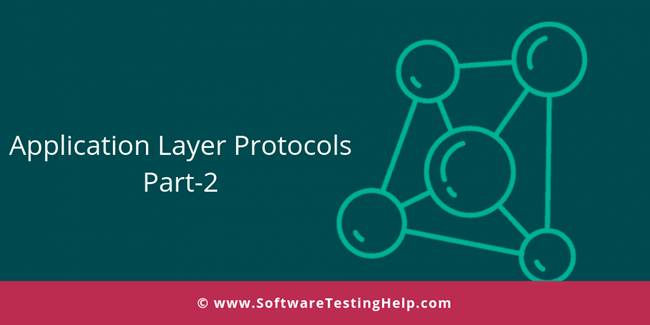 It is the TCP/IP based application layer protocol and is deployed to transport data in the form of image, video, text, HTML files and query results on the World Wide Web.

The default port assigned to it is 80, however, the other ports are also applicable. It is basically the standardization of communication between various machines on the Internet to communicate with each other.

It is based on the client-server architecture model whereas the search engines like Mozilla, web browsers etc., behave as HTTP clients and the web server behave as HTTP servers.

The Client initiates the request to the server by using different methods like URI, pursued by the MIME messages which have the information regarding format, client data, and content on a UDP connection.

The HTTP server in response sends back a status message with a success or error code, along with the information requested by the client and again is pursued by MIME messages.

For understanding and writing the HTTP messages, we should understand some of the parameters that are used in building up the messages. The parameters are explained below for your reference. 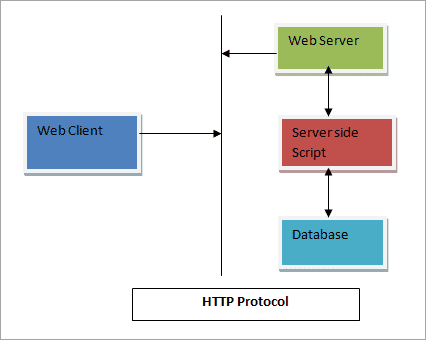 Also read =>> What is URI In World Wide Web

The URI is used for building up a network connection and to recognize a particular resource. The protocol employs the reference provisions by the URI as a location known as URL and the name known as a URN, for reflecting on the source that which methodology is going to be used.

Thus in this way the protocol is used for communication over the Internet and the communication between the users and several other media like proxy servers, gateways etc., by using other protocols as well on this interface.

To provision, the open and extended data typing, the accept headers, and content type fields are deployed.

The generic format is as follows:

The HTTP request and response messages use the format RFC 822 and are built up of the basis of the below four articles.

#2) Header-fields: Header fields are very important as they carry the necessary data about the objects attached in the message body and request or response data of the message line.

Apart from this, there are other few header fields that are most commonly used.

Below is the format with an example of the most commonly used header fields.

(i) HTTP_ACCEPT: The server can acknowledge or even exclude the request raised by the client. Therefore, this is the case where the HTTP server will accept the header information.

Format: Type/subtype, type/subtype and E.g.( Accept: image/gif, text/HTML) and so on.

(ii) HTTP_USER_AGENT: This is used to specify the software, its version and which browser the client is using for sending the request to the server.

(iii) Content-Type: It tells which kind of data is sent to the destination end like the type of file, etc. With the help of this header, the recipient will get to know how to handle the data.

(iv) Date: It specifies the date and time on which the request is being initiated.

(v) Expires: It specifies the validity session of the information in the resource.

(vi) From: It specifies the Internet e-mail address of the end user who initiated the request. This header field is used to avoid the entry of unauthorized resources in the system and the unwanted IP addresses can be blocked.

(vii) Last Modified: This field specifies the date and time on which the request initiator user has last modified the content of the resource.

(viii) Location: It is a type of response header. It specifies the location of the resource that was requested and is recognized by the URI.

(ix) Server: This field is also a response header field and specifies the software that is used by the originating server to manage the request. It contains information about the software subtype as well.

For Example, we have shown a small substance of the message body:

The format of request that is sent by the HTTP client to an HTTP server has the following substances:

The request method is case sensitive and in several requests, URI is implemented to perform the action. Some of the commands include GET, POST, PUT, DELETE, CONNECT, OPTIONS etc.

Below given is the example of the request message in which the HTTP requests to fetch morning.htm page from the web server streaming on www.google.com.

Once the HTTP server receives the request from the client, it analyses it and reverts with HTTP response messages.

The Response message has the following substances:

The version used is 1.1 and the status code is a 3-digit numeral.

The description of the various codes used is as follows:

Example of Request Message: HTTP response to fetch morning.htm page from the web page Google.com is

It is an application layer protocol of the TCP/IP protocol suite.

It is used for managing various networking systems by allocating the IP addresses, subnet mask, default gateway, and other relating routing information to the host devices dynamically, so that the process becomes self-operating and the IP addresses will be allocated to various network devices automatically without any manual interference.

It is deployed in LAN as well as in WAN networks. DHCP follows the client-server architecture model of communication. It is a connection-less protocol based on UDP. The port 67 is used by the server as the destination port and port 68 is used by the client host.

The DHCP server allows the network devices to request for IP address and other relevant data automatically from the ISP and thus lower down the need for manual configuration done by the network administrator.

In DHCP, the server maintains the unique pool of IP addresses, and data regarding the configuration structure of the clients and assigns the IP addresses from the address pool.

The clients having DHCP feature enabled, broadcast the discovery message to the DHCP server when they first connect to a network and request for configuration data for the network with which they are connected with. The DHCP server acknowledges the request and responds to it with the desired IP details with an offer message.

But the IP addresses provided by the server are for a particular time period only and they are also known as a lease, and the allocated IP is valid only for that period. If the session still persists, then the DHCP client again requests for the IP, but this time the DHCP server may allocate a new set of IP as per the set policies.

The problem with this protocol is that it is not a secure protocol to use as there is no authenticating process involved in the communication process. Thus the IP pool assigned by using this protocol is easily vulnerable to virus attacks and hacking. 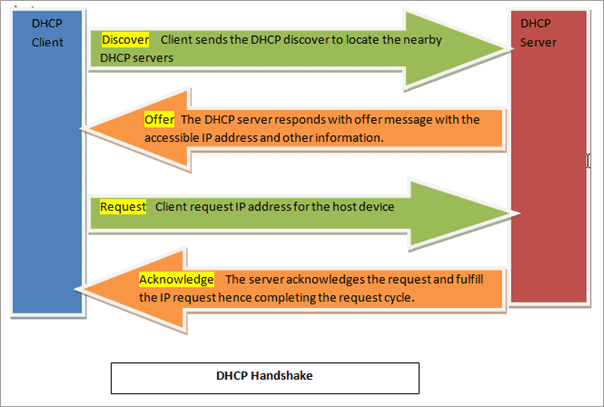 The communication system in the olden days was extremely different. The postman used to deliver us the emails sent by our friends and family situated at remote end locations. In the same way, the POP is used in the modern day computer networking systems by the e-mail client systems to retrieve e-mail from the servers.

POP3 is the most popular version used for this purpose. To access the remote end mailbox, the POP facilitates mail download and deletes the options to the local client. Usually, the client retrieves the emails from the server using POP and after saving them on the client PC’s, it deletes them from the server.

For encrypted communication, the POP3 connects itself with the server by employing transport layer security (TSL) or secure sockets layer (SSL) on TCP port 995.

The available messages in the inbox in the POP session are recognized by a message number or exceptional identifier allocated to the message by the server.

From the below screenshots of Microsoft outlook, we can see how settings are done for the incoming server using POP3 to retrieve emails. 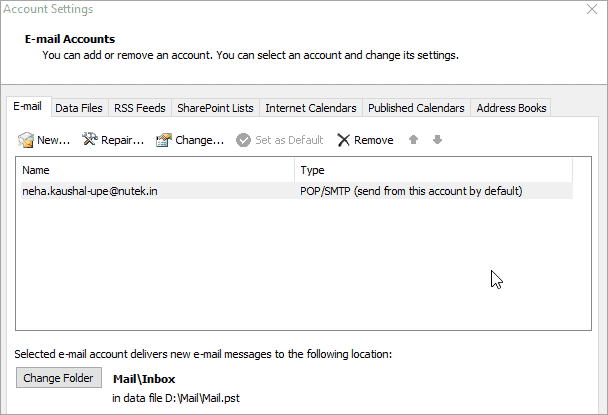 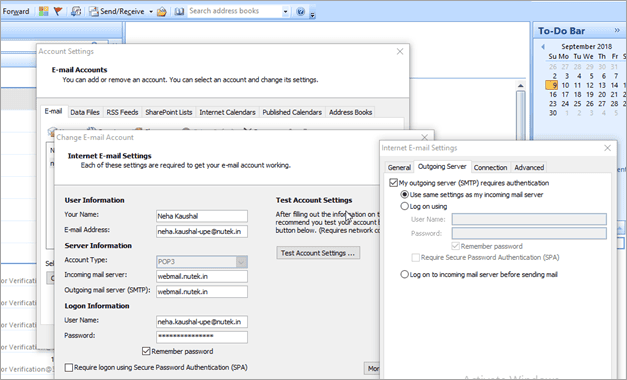 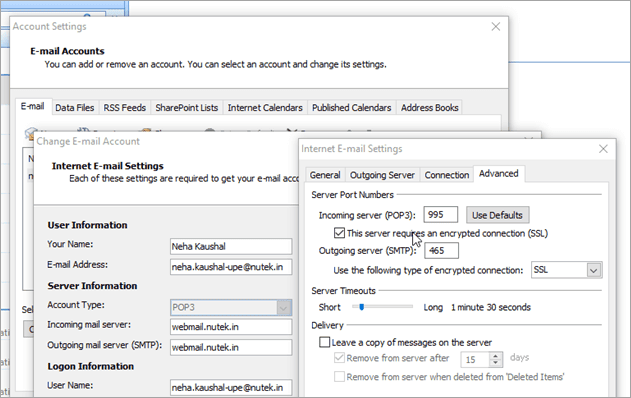 From this tutorial, we have understood the importance of the application layer protocols in computer networking systems as we are directly or indirectly using them in each and every step while using the Internet, surfing various links, sending or receiving e-mails etc.