In this Easy Networking Training Series, we explored more about Authentication Standards of IEEE and Wireless LAN in our previous tutorial.

What is Network Security?

The most common authentication process practiced everywhere is to assign an exclusive user ID and password to the user for authentication and to access the resources of the network.

The term security is inclusive of both private and public domain networks like RTGS or NEFT through online banking. 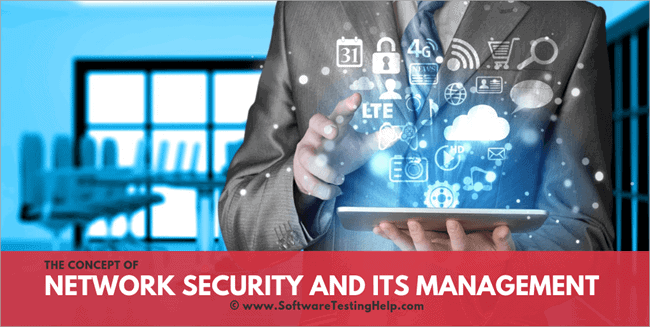 In this tutorial, we will explore the ways of dealing with various kinds of network attacks and also get to know how to implement the network security policies for making our network a highly secured one.

What is Network Security and Its Management?

Security management in any network, whether public or private, is a set of policies and routine procedure implemented by the networking system to shield their network from unauthorized access, denial of computer service, interruption in running, etc is known as Network Security Management.

It also emphasizes on round the clock monitoring of the network to prevent the system from virus attacks, and any misuse or modification in the database.

The best ways to manage security is to use advanced antivirus and anti-malware software and keep updating the system at regular intervals of time.

The use of the Internet has been increased drastically, as we are moving even our day to day activities towards complete digitalization. Due to the increase in the use of the Internet, hackers and attackers also become more active and our networking system tends to a higher number of virus attacks.

Basically, the need for network security is to perform two tasks mainly, first is to secure the information from any unauthorized access and the second is to provide the security to the data stored at PC or laptops not only for an individual network but also on the shared or public domain networks.

The need for information security is based on the following points:

We can shield our networking system in various ways, based on the type of network attack.

Thus, there are many solutions, and out of which few are discussed below.

The protection software that is used to shield our system from viruses, Trojan attacks, worms etc is an antivirus and anti-malware software.

This software scans the system and network for malware and Trojan attack every time when a new file is introduced in the system. It also detects and fixes the problem, if found with any infected data or with a virus.

The MNC’s or large-scale organizations, maintain the confidentiality of data and resources by making sure that their internal information will not be leaked out by any of the employees to the outside world.

This is done by deploying DLP technology in which the network administrator restricts the employee’s access to the information to prevent it from sharing to the outside world by blocking ports and sites for forwarding, uploading or even printing information.

The attackers can induce the virus or malware in the network by sending it through an e-mail in the system.

Therefore a highly skilled email security application which can scan the incoming messages for viruses and is capable of filtering suspicious data and controlling the outflow of messages to prevent any kind of information loss to the system is required.

These are an integral part of the networking system. It acts as a wall between two networks or between two devices. It is basically a set of pre-defined rules which are used to prevent the network from any unauthorized access.

Firewalls are of two kinds, i.e. hardware, and software. The software firewall is installed in the systems to provision shield from various types of attacks as they filter, block and fix the unwanted creatures in the network.

The hardware firewall acts as a gateway between two networking systems so that only a particular pre-defined user or traffic can access the network and its resources.

Intrusion prevention system (IPS): It is the network security system which contains some set of rules and by following them you can easily figure out the threats and block them as well.

The cyber-criminals can easily hack or attack the mobile handsets with the data facility on the handsets, and they can enter into the device from any unsecured resource link from the website.

Hence it is necessary to install an antivirus on our device and people should download or upload the data from reliable resources and that too from secured websites only.

For the security point of view, a software-based organization will segment their crucial data into two-or-three parts and keep them at various locations and on several resources or devices.

This is done, so that in the worst case, if the data at any location is corrupted or deleted by a virus attack, then it can be again reconstructed from any backup sources.

Web security refers to provisioning limited access to websites and URLs by blocking the sites which are more vulnerable to viruses and hackers. Thus it is basically concerned with controlling the web-based threats.

The networking system in which a user present at the remote end, accessing the crucial database of the organization from a remote device like mobile phones or laptops, endpoint security is required.

Various software which has inbuilt-advanced endpoint security features and is used for this purpose. This provides seven layers of security inclusive of file reputation, auto-sandbox, web- filtering, antivirus software, and a firewall.

The network should be designed in a way in which not everyone can access all the resources.

This is done by deploying a password, unique user ID and authentication process for accessing the network. This process is known as access control as by implementing it we can control the access to the network.

A system can be made highly secure by using VPN networks in association with using encryption methods for authentication and floating data traffic over the Internet to a remotely connected device or network. IPSec is the most commonly used authentication process.

Types of Security provisions at various levels in a system

How to Make Your System and Network Safe?

To manage the network, in such a way in which it will be capable enough to deal with all the possibilities of the network attacks & virus problem and fix them is known as Network security management.

The key parameters towards making your system safe are:

To protect your system or network from malicious attacks, firstly put a strong password in your system for login and access and the password must consist of lots of character, symbol, and numbers. Avoid using birthdays as a password as it can be easily cracked by the hackers.

Always put a strong firewall in your networking system to protect it from unwanted access or other threats.

To update your system and network with the latest version of the antivirus software and to install the latest patches and scripts for the system as per the need of system is very crucial. This will minimize the chances of virus attacks and make the network more secure.

Laptops are movable devices and are so vulnerable to network threats.

Similarly, mobile phones are wireless devices and they are also easily exposed to threats. To shield these devices, a strong password should be used to access the various resources of it. It will be better to use a biometric finger-print password to access the smart devices.

We should periodically take backups of files, documents and other important data in our system or hard-disk and should save them to a centralized server or some secure location. This should be done without fail. In case of emergency, this will help to restore the system quickly.

Before downloading and clicking on any link or site on the Internet, we should keep in mind that one wrong click can give an invitation to many viruses on our network. Thus download the data from trusted and secure links only and avoid surfing on unknown links and websites.

Also, avoid clicking on advertisements and offers which are frequently displayed on web-page whenever you log in to the Internet.

The configuration done on the IOS or router should be done using a unique user ID and password and should be kept secure. 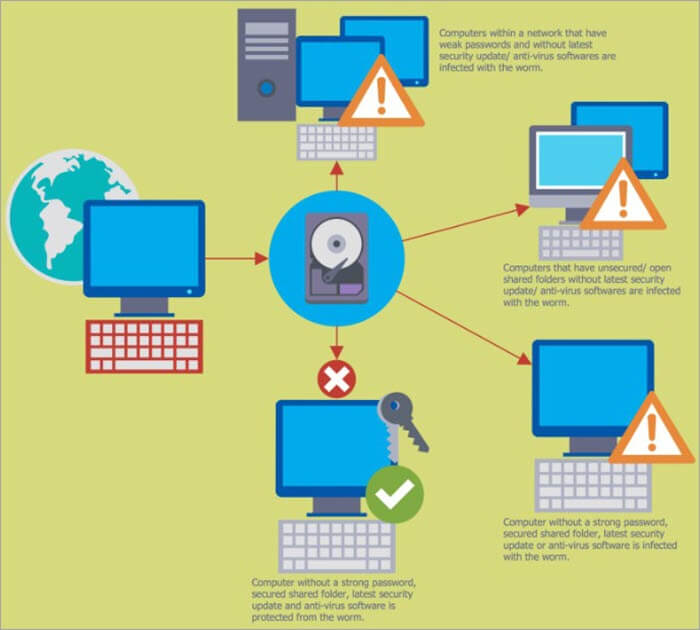 In the above figure, it has been explained that the computers with a strong password, updated security features and equipped with anti-virus software protection are immune to a worm attack.

On the other hand, computers or networks with a weak password, out of the date system update and not equipped with an anti-virus software are more susceptible to the attacks of worms and easily get corrupted and diminished.

In this tutorial, we have explored the need for network security, types of security and key points to manage it.

We have also seen how to make our networking system immune to all kinds of virus and Trojan attacks by implementing strong passwords to the system, assigning multi-level security, using anti-virus software and by updating all the software and system on time with an example.