In Unix, all the instructions outside the kernel are executed in the context of a process. 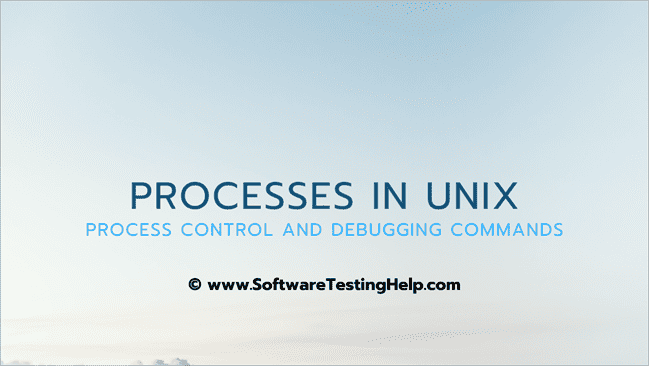 In this tutorial, we will cover what process related information is stored and also describe some commands that are used to manage processes. We will also provide a brief description of how command scripts can be debugged.

The process table contains information of all the processes that are running currently. The main purpose of this table is to manage all the running processes effectively.

Note: As a multitasking and multi-user OS, Unix will have many processes running at the same time.

Processes in Unix go through various states depending on various circumstances. The state changes may be triggered by whether a process needs to wait for a read or write operation to complete, or when a different more urgent process needs to be given a chance to run.

There are a number of commands that are available to review and manipulate processes. The ‘ps’ command can be used to view the process status information.

As discussed in an earlier tutorial, processes may be classified as foreground, background, or daemon. When a command is run from the terminal it runs normal in the foreground. In order to run a process in the background, the ‘&’ button at the end of the command can be used.

Each process is also associated with a priority. This is used to ensure that the OS is able to fairly allocate time to various processing tasks. The ‘nice’ command can be used to reduced the priority of a process and thus be ‘nice’ to the other processes, i.e.

This line will run the specified command at a lower priority – by default, the priority will be reduced by 10. The command also takes a parameter that can be used to use a different level of ‘niceness’.

This command runs ‘ls’ with the priority reduced by 20.

It is also possible to increase the priority with a negative ‘niceness’. However, this needs superuser permission.

With this command, sorting of file1 and saving in file2 process will continue even if we have logged out of the system.

The ‘kill’ command can be used to terminate any of the processes depending on permissions.

This command will terminate a process with the process id <pid>. The PID of a process can be obtained using the ‘ps’ command.

This ‘at’ command is used to execute commands at a particular date and time in the future.

Unix provides a number of mechanisms to help find bugs in your command scripts. These mechanisms can be used to view a trace of what is being executed i.e. the sequence in which commands are executed. The trace can be used to understand and verify the logic and control flow of the script.

verbose mode: Setting this option before running a command will ensure that the command that will be executed is printed to stdout before it is actually executed.

execution trace mode: Setting this option will display each command as it is executed along with its arguments.

no-exec mode: Setting this option shows any errors without actually running any commands.

Check out our upcoming tutorial to know more about Advanced Shell Scripting.