Selenium IDE Download and Installation and Introduction to Its Core Features:

Note: This is quite an extensive tutorial with lots of images so allow it to load completely. Also, click on an image or open in new window to enlarge images. 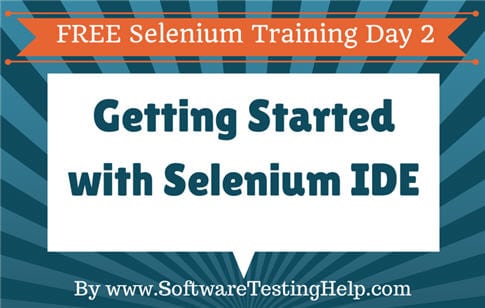 Selenium integrated development environment, acronym as Selenium IDE is an automated testing tool that is released as a Firefox plug-in. It is one of the simplest and easiest tools to install, learn and to go ahead with the creation of test scripts. The tool is laid on a record and playback fundamental and also allows editing of the recorded scripts.

The most impressive aspect of using selenium IDE is that the user is not required to possess any prior programming knowledge. The minimum that the user needs is the little acquaintances with HTML, DOMS and JavaScript to create numerous test scripts using this tool.

Being a Firefox plug-in, Selenium IDE supports only Firefox, thus the created test scripts could be executed only on Firefox. A few more loopholes make this tool inappropriate to be used for complex test scripts. Thus, other tools like Selenium RC, WebDriver comes into the picture.

So, before gripping on to the details of Selenium IDE, let’s have a look at its installation first.

For the ease of understanding, I have bifurcated the entire IDE installation process in the following chunks/steps.

Before taking off, there is one thing that needs to be in place prior to the installation; Mozilla Firefox. You can download it from here => Mozilla Firefox download

Step #1: Selenium IDE download: Open the browser (Firefox) and enter the URL http://seleniumhq.org/.This would open the official Selenium headquarter website. Navigate to the “Download” page; this page embodies all the latest releases of all the selenium components.

Step #2: Move under the selenium IDE head and click on the link present. This link represents the latest version of the tool in the repository.

Step #3: As soon as we click on the above link, a security alert box would appear so as to safeguard our system against potential risks. As we are downloading the plug-in from the authentic website, thus click on the “Allow” button.

Step #4: Now Firefox downloads the plug-in in the backdrop. As soon as the process completes, the software installation window appears. Now click on the “Install Now” button. 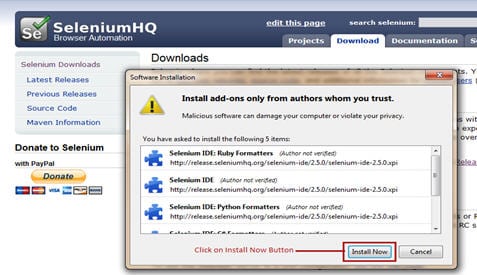 Step #5: After the installation is completed, a pop-up window appears asking to re-start the Firefox. Click on the “Restart Now” button to reflect the Selenium IDE installation.

Step #6: Once the Firefox is booted and started again, we can see selenium IDE indexed under menu bar -> Web Developer -> Selenium IDE. 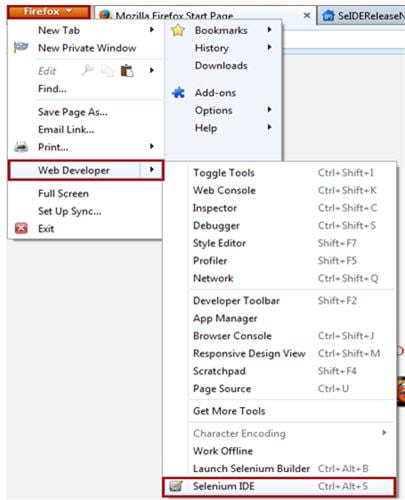 Let’s have a look at each of the feature in detail. 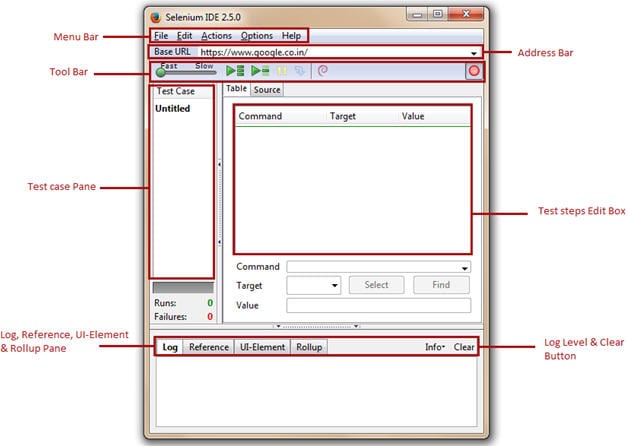 File Menu is very much analogous to the file menu belonging to any other application.

It allows the user to: 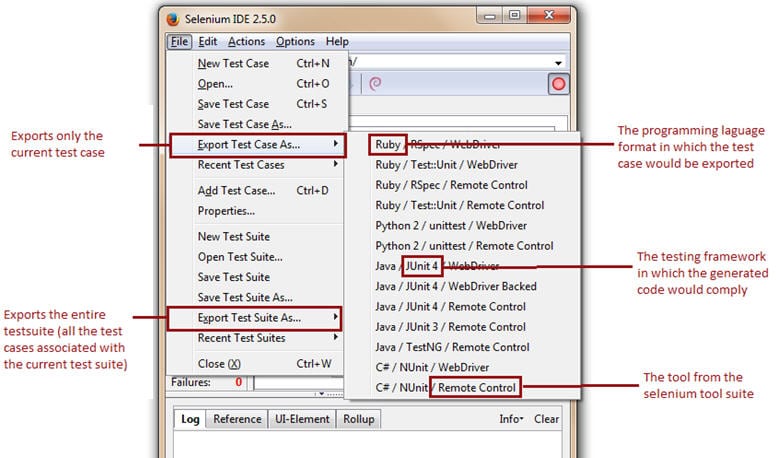 The Selenium IDE test cases can be saved into the following format:

The Selenium IDE test cases can be exported into the following formats/programming languages.

Notice that with the forthcoming newer versions of Selenium IDE, the support to formats may expand.

Edit menu provides options like Undo, Redo, Cut, Copy, Paste, Delete and Select All which are routinely present in any other edit menu. Amongst them, noteworthy are:

The new command would be inserted above the selected command/test step.

Now the user can insert the actual command action, target and value.

In the same way, we can insert comments.

The purple color indicates that the text is representing a comment. 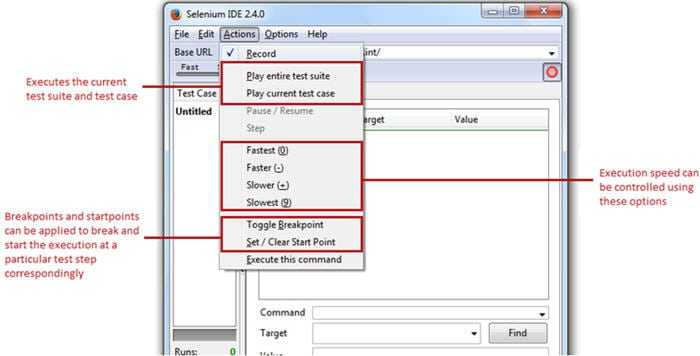 Actions Menu equips the user with the options like:

Options menu privileges the user to set and practice various settings provided by the Selenium IDE. The options menu is recommended as one of the most important and advantageous menu of the tool.

Options Menu is primarily comprised of the following four components which can be sub-divided into the following: 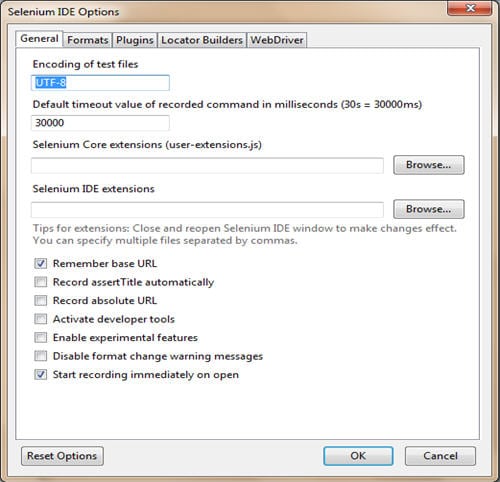 Let’s have a look at the few important ones. 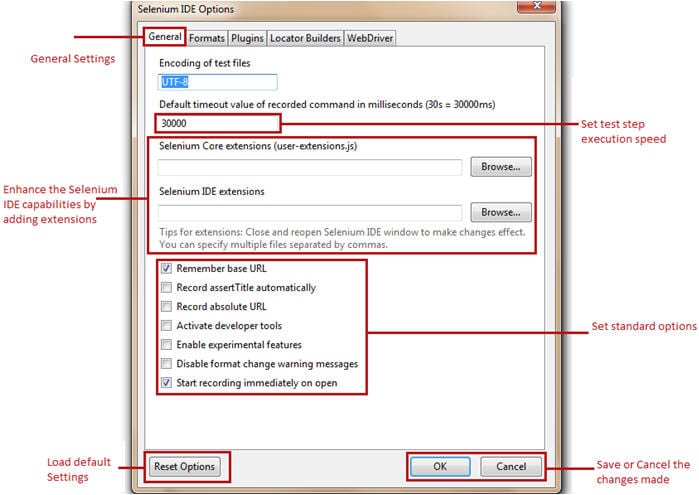 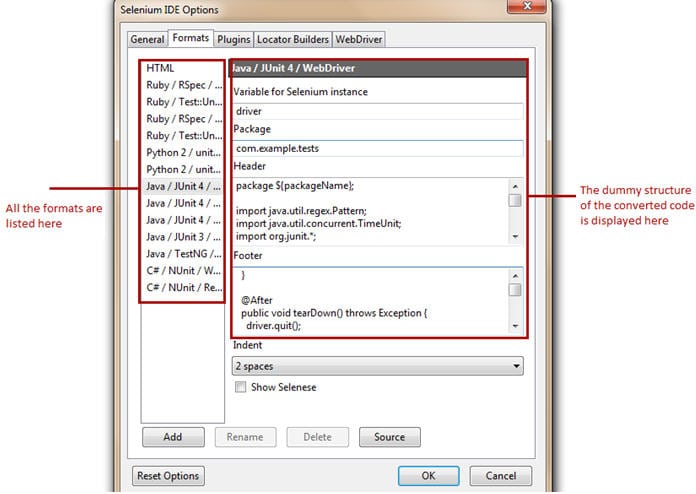 Formats tab displays all the available formats with selenium IDE. The user is levied with the choice to enable and disable any of the formats.

Plug-ins tab displays the supported Firefox plug-ins installed on our instance of Selenium IDE. There are a number of plug-ins available to cater different needs, thus we can install these add-ons like we do other plug-ins. One of the recently introduced plug-ins is “File Logging”. At the end of this tutorial, we will witness how to install and use this plug-in.

With the standard distribution, Selenium IDE comes with a cluster of following plug-ins:

These formatters are responsible to convert the HTML test cases into the desired programming formats. 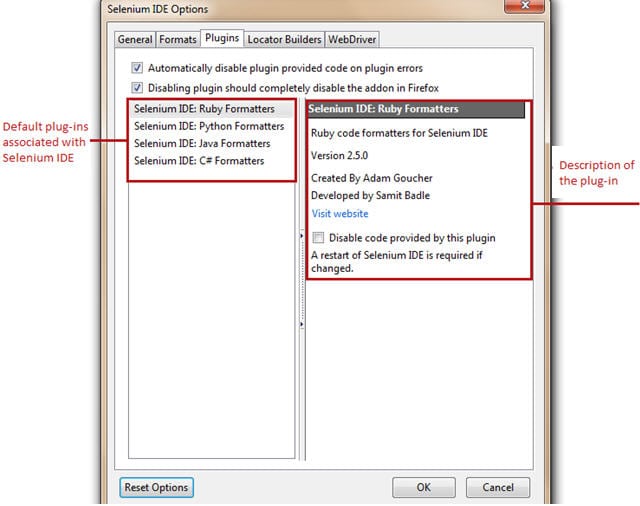 Locator builders allow us to prioritize the order of locator types that are generated while recording the user actions. Locators are the set of standards by which we uniquely identify a web element on a web page. 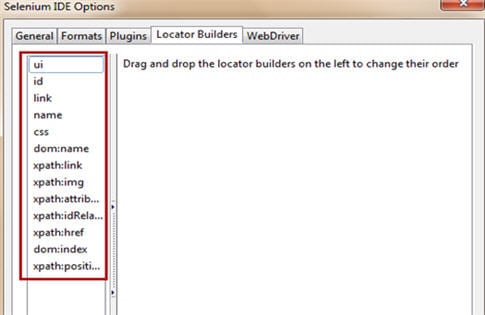 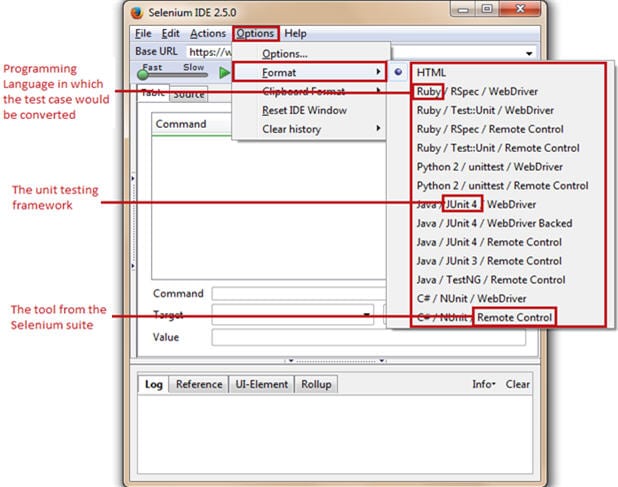 As Selenium has a wide community and user base, thus various documentation, release notes, guides etc. are handily available. Thus, the help menu lists down official documentation and release notes to help the user.

Base URL bar is principally same as that of an address bar. It remembers the previously visited websites so that the navigation becomes easy later on. 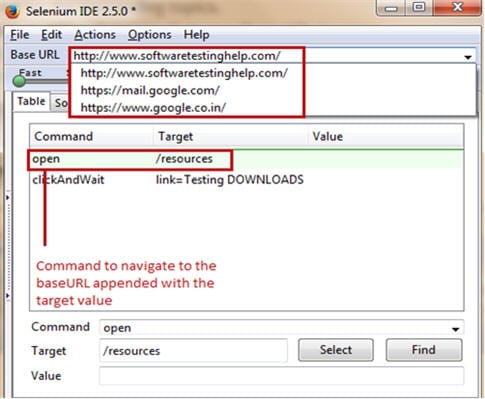 Now, whenever the user uses “open” command of Selenium IDE without a target value, the base URL would be launched on to the browser.

To access relative paths, the user simply needs to enter a target value like “/download” along with the “open” command. Thus, the base URL appended with “/downloads” (http://docs.seleniumhq.org/resources) would be launched on to the browser. The same is evident in the above depiction.

Toolbar provides us varied options pertinent to the recording and execution of the test case.

The editor is a section where IDE records a test case. Each and every user action is recorded in the editor in the same order in which they are performed.

The editor in IDE has two views, namely:

It is the default view provided by Selenium IDE. The test case is represented in the tabular format. Each user action in the table view is a consolidation of “Command”, “Target” and “Value” where command, target and value refer to a user action, web element with the unique identification and test data correspondingly. Besides recording it also allows the user to insert, create and edit new Selenese commands with the help of the editor form present in the bottom. 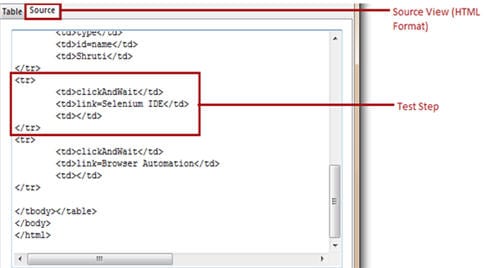 The test case is represented in the HTML format. Each test step is considered be a row <tr> which is a combination of command, target and value in the separate columns <td>. Like any HTML document, more rows and columns can be added to correspond to each Selenese command. 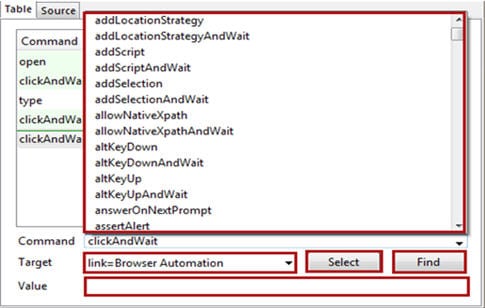 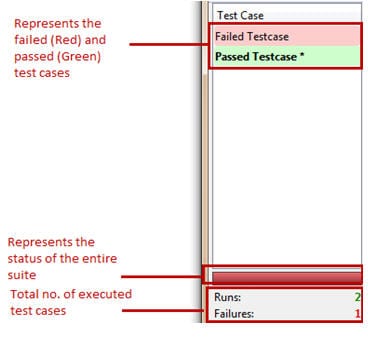 Selenium IDE has a color coding ingredient for reporting purpose. After the execution, the test case in marked either in “red” or “green” color.

Log pane gives the insight about current execution in the form of messages along with the log level in the real time. Thus, log messages enable a user to debug the issues in case of test case execution failures.

The printing methods/log levels used for generating logs are:

Logs can be filtered with the help of a drop-down located at the top-right corner of the footer beside the clear button. Clear button erases all the log messages generated in the current or previous run.

Generating Logs in an external medium

Recently introduced “File Logging” plug-in enables the user to save log messages into an external file. File Logging can be plugged into IDE like any other plug-in. Upon installation, it can be found as a tab named “File Logging” in the footer beside the Clear button.

Reference Pane gives the brief description about the currently selected Selenese command along with its argument details.

UI – Element Pane allows Selenium user to use JavaScript Object Notation acronym as JSON to access the page elements. More on this can be found in UI-Element Documentation under Help Menu.

Rollup Pane allows the user to roll up or combine multiple test steps to constitute a single command termed as “rollup”. The rollup, in turn, can be called multiple times across the test case.

Here are the cruxes of this tutorial:

Next Tutorial #3: Now that we are acquainted and comfortable with Selenium IDE Download and install with its features, in the next tutorial we would practice these features by creating our own test script using Selenium IDE.

A remark for the readers: While our next tutorial of the Selenium series is in the processing mode, install the tool and the required utilities to get started. Experience the features by playing around with the tool till we meet next with the next tutorial on “My first Selenium IDE script”.

Stay tuned till then and share your views, comments and knowledge to help us groom. Also, let us know if you find anything that we missed out so that we can include them in the subsequent tutorials.

Finally, if you like this tutorial please consider sharing it with friends and on social media sites.