We discussed each of these commands with sample code snippets and examples so as to make you capable of using these commands effectively whenever you are encountered with similar situations. Amongst the commands we discussed in the previous tutorial, few of them owe utmost importance. 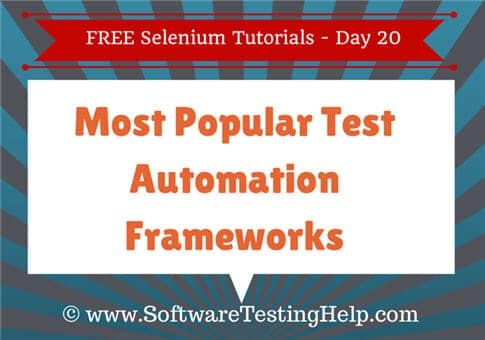 A framework is considered to be a combination of set protocols, rules, standards and guidelines that can be incorporated or followed as a whole so as to leverage the benefits of the scaffolding provided by the Framework.

Let us consider a real-life scenario.

We very often use lifts or elevators. There are a few guidelines those are mentioned within the elevator to be followed and taken care off so as to leverage the maximum benefit and prolonged service from the system.

Thus, the users might have noticed the following guidelines:

There can be many more rules or sets of guidelines. Thus, these guidelines if followed makes the system more beneficial, accessible, scalable and less troubled for the users.

Now, as we are talking about “Test Automation Frameworks”, let us move our focus towards them.

In a very simple language, we can say that a framework is a constructive blend of various guidelines, coding standards, concepts, processes, practices, project hierarchies, modularity, reporting mechanism, test data injections etc. to pillar automation testing. Thus, the user can follow these guidelines while automating application to take advantages of various productive results.

The advantages can be in different forms like the ease of scripting, scalability, modularity, understandability, process definition, re-usability, cost, maintenance etc. Thus, to be able to grab these benefits, developers are advised to use one or more of the Test Automation Framework.

Moreover, the need of a single and standard Test Automation Framework arises when you have a bunch of developers working on the different modules of the same application and when we want to avoid situations where each of the developers implements his/her approach towards automation.

Note: Take a note that a testing framework is always application independent that is it can be used with any application irrespective of the complications (like Technology stack, architecture etc.) of the application under test. The framework should be scalable and maintainable.

Now that we have a basic idea of what is an Automation Framework, in this section we would harbinger you with the various types of Test Automation Frameworks those are available in the marketplace. We would also try shed lights over their pros and cons and usability recommendations.

There is a divergent range of Automation Frameworks available nowadays. These frameworks may differ from each other based on their support to different key factors to do automation like reusability, ease of maintenance etc.

Let us discuss each of them in detail.

But before that, I would also like to mention that despite having this framework, the user is always leveraged to build and design his own framework which is best suitable to his/her project needs.

Module based Testing Framework is based on one of the popularly known OOPs concept – Abstraction. The framework divides the entire “Application Under Test” into a number of logical and isolated modules. For each module, we create a separate and independent test script. Thus, when these test scripts took together builds a larger test script representing more than one modules.

These modules are separated by an abstraction layer in such a way that the changes made in the sections of the application doesn’t yield affects on this module. 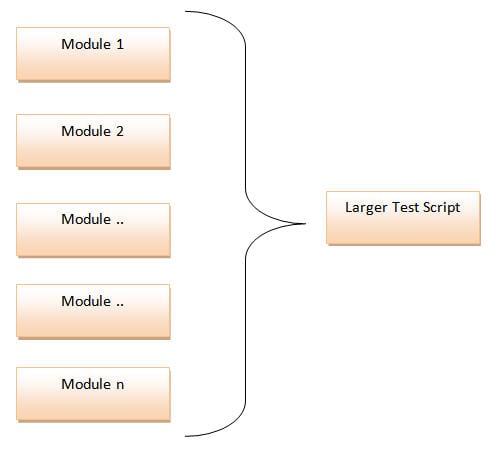 The basic fundamental behind the framework is to determine the common steps and group them into functions under a library and call those functions in the test scripts whenever required.

Example: The login steps can be combined into a function and kept into a library. Thus all the test scripts those require to login the application can call that function instead of writing the code all over again.

While automating or testing any application, at times it may be required to test the same functionality multiple times with the different set of input data. Thus, in such cases, we can’t let the test data embedded in the test script. Hence it is advised to retain test data into some external database outside the test scripts.

Data Driven Testing Framework helps the user segregate the test script logic and the test data from each other. It lets the user store the test data into an external database. The external databases can be property files, xml files, excel files, text files, CSV files, ODBC repositories etc. The data is conventionally stored in “Key-Value” pairs. Thus, the key can be used to access and populate the data within the test scripts.

Let us understand the above mechanism with the help of an example.

Step 1: First and the foremost step are to create an external file that stores the test data (Input data and Expected Data). Let us consider an excel sheet for instance. 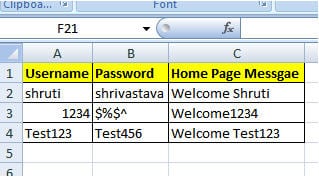 Step 2: The next step is to populate the test data into Automation test Script. For this purpose, several API’s can be used to read the test data.

The Keyword driven testing framework is an extension to Data driven Testing Framework in a sense that it not only segregates the test data from the scripts, it also keeps the certain set of code belonging to the test script into an external data file.

These set of code are known as Keywords and hence the framework is so named. Keywords are self-guiding as to what actions need to be performed on the application.

In the above example, keywords like login, clicking and verify Link are defined within the code.
Depending upon the nature of application keywords can be derived. And all the keywords can be reused multiple times in a single test case. Locator column contains the locator value that is used to identify the web elements on the screen or the test data that needs to be supplied.

All the required keywords are designed and placed in the base code of the framework.

As the name suggests, the Hybrid Testing Framework is a combination of more than one above mentioned frameworks. The best thing about such a setup is that it leverages the benefits of all kinds of associated frameworks.

Test sheet would contain both the keywords and the Data.

In the above example, keyword column contains all the required keywords used in the particular test case and data column drives all the data required in the test scenario. If any step does not need any input then it can be left empty.

Behavior Driven Development framework allows automation of functional validations in easily readable and understandable format to Business Analysts, Developers, Testers, etc. Such frameworks do not necessarily require the user to be acquainted with the programming language. There are different tools available for BDD like cucumber, Jbehave etc. Details of BDD framework are discussed later in Cucumber tutorial. We have also discussed details on Gherkin language to write test cases in Cucumber. 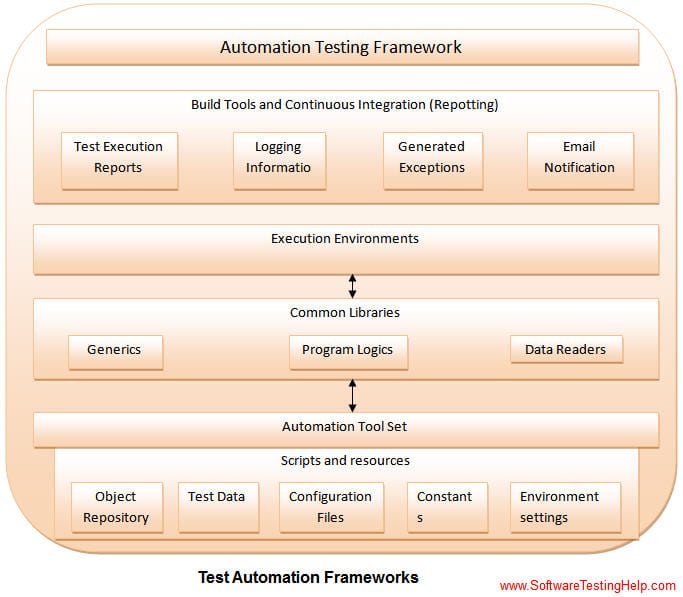 Though the above pictorial representation of a framework is self-explanatory we would still highlight a few points.

The frameworks illustrated above are the most popular frameworks used by the testing fraternity. There are various other frameworks also in the place. For all the further tutorials we would base on the Data Driven Testing Framework.

In this tutorial, we discussed the basics of an Automation Framework. We also discussed the types of frameworks available in the market.

Next Tutorial #21: In the next tutorial, we would briefly introduce you to the sample framework, the MS Excel which would store the test data, excel manipulations etc.

Till then feel free to ask your queries about automation frameworks.