In the last tutorial, we familiarized you with the basics of test automation Frameworks, its components and types. The frameworks illustrated in the previous tutorial were a few amongst the most popular frameworks used by the testing fraternity.

We briefly discussed Module based Frameworks, Library Architecture based framework, Keyword driven framework, Data driven Framework and Hybrid Framework. There are various other frameworks also in the place.

Please take a note that we would be adopting Data Driven Test Automation Framework for the rest of our tutorials.

In the current tutorial in this series, we would make you acquainted with a sample framework, the Excels which would store the test data and their Excel manipulations. On the same lines, we would move forward and introduce new strategies and resources to mature our framework. 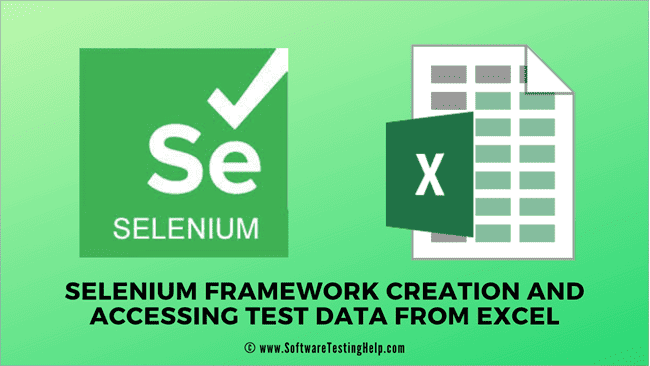 Moving ahead, we would start with the description of the project hierarchy that we would be creating in order to segregate the various project components.

Refer the below image for the project hierarchy created for the sample project. The below java project can be easily created within the eclipse the way we have created the projects in the earlier tutorials. 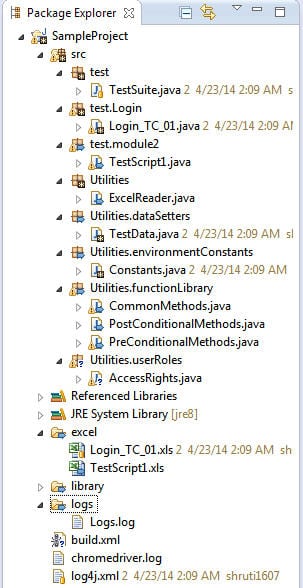 #1) src – The folder contains all the test scripts, generics, readers and utilities. All these resources are nothing but the simple java classes. Under the source (src) folder, we have created a hierarchy of folders.

a) test – The “test” folder is constituted of majorly two ingredients – test suite and the folders representing the various modules of the application under test. Thus, each of these folders contains the test scripts specific to the module to which it is associated. Testsuite is a logical combination of more than one test scripts. Thus, the user can mark an entry of any of the test scripts within the test suite that he/she desires to execute in the subsequent runs.

b) utilities – The “utilities” folder is constituted of various generics, constants, Readers and classes for implementing user-defined exceptions. Each of the folders under utilities has got its own significance.

Very often, we are supposed to perform certain procedures prior and aftermath to the actual test execution like login to the application, setting up environments, activities related to user roles, data manipulations, writing results, methods those generate pre/post-conditions to other methods. Since we tend to perform these activities for all or most of the test script, thus it is always recommended to create a separate class for such activities instead of coding them repeatedly in each of the test scripts.

Like Pre and postconditions, there may be methods and functions those can be used by more than one test script. Thus, these methods are grouped together in a class. The test script can access these methods using the object of the common class.

#3) library – The folder acts as a repository/artifactory for all the required jar files, libraries, drivers etc to successfully build the test environment and to execute the test scripts. Refer the following figure to check out the libraries we would be employed within our project.

#4) logs – The folder contains a .txt file that stores the logging information upon each execution.

#5) test material – The folder contains the actual test data that needs to be uploaded if any. This folder would come into picture when we come across test scenarios where the user is required to upload files, documents, pictures, reports etc.

#6) build.xml – The xml file is used by the “Ant Server” to automate the entire build process.

#7) log4j.xml – This xml file is used by a Java-based utility named as “Log4j” to generate the execution logs.

Note: We would study more about the logs, user-defined exceptions and Ant in detail in the upcoming tutorials. So don’t panic if you get confused between the notions.

Now, as we move forward let us understand the phenomenon where we access the excel files and populate the test data into our test scripts.

In order to comprehend the process easier, we would break down the process into the following steps.

Step 1: The first and the foremost step is to create the test data with which we would be executing the test scripts. Considering the aforementioned test data format, let us create an excel file named as “TestScript1”. Furnish the values in the elements.

Step 2: The next step is to download a standard java based API/Library named as “Java excel Library” (jxl) to be able to access the already created generic methods for Excel Manipulation.

Step 4: Create a generic class –“CommonMethods.java”. Create a common method within the class that would read the cells from the excel sheet using the methods implemented in ExcelReader.java.

Step 5: Create a new java class named as “TestData.java”. This class would act as a getter and setter for excel data. Copy and paste the following code in the TestData.java class.

Step 6: The next step is to create instances of “TestData.java” and “CommonMethods.java” java classes within the test script in order to access and populate the test data. Refer the below code snippet for object initialization, reading excel data and populating the values wherever required.

Therefore using the instance of testData.java class in conjunction with getters, any test data value can be populated within the script.

The tutorial mainly revolved around the notions like Framework Creation and Accessing test data from the excels. We made you acquainted with the Framework creation strategy using a sample project. We briefly laid the light on the various components and aspects of our framework.

In order to access the test data stored in the external data source, we used a java based API – jxl. We also created the sample code for reading and populating the excel data into the test scripts.

Next Tutorial #22: In the next tutorial, we would base our tutorial on the concepts of generics and their accessibility mechanism. We would create a few sample generic methods and then access them within the test scripts. We would also introduce you to the concept of Testsuite and the sample code development.