In our last Selenium tutorial, we learned how to troubleshoot some recurrent problems in selenium scripts. We discussed some advance concepts wherein we would deal with mouse and keyboard events, accessing multiple links by implementing lists.

Moving ahead with our advanced topics in the Selenium training series, we would introduce you with the concept of Database testing using Selenium WebDriver.

We would discuss the basic processes like database connection, executing queries, fetching data and disconnecting database instances etc. We would also discuss various practical implications where we need Database testing with automation testing in order to test the complete end-to-end scenarios. 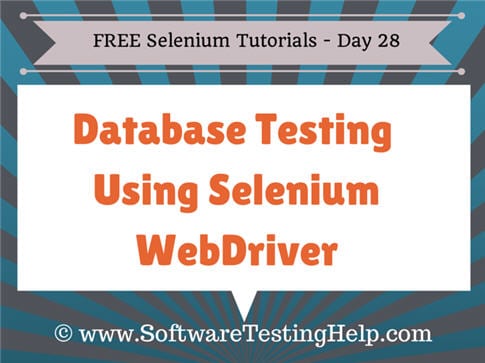 Before moving ahead with the technical implications associated with Automated Database testing. Let us discuss a few scenarios where we require performing Database testing along with the Automation Testing. But before that, I would like to affirm here that Database testing is a very peculiar type of testing whereas Selenium WebDriver is a tool used to simulate and automate user interactions with the Application UI.

So technically speaking we are not precisely performing Database Testing rather we are testing our application in conjunction with Database in order to ensure that the changes are reflected at both the ends thereby identifying defects early.

Absolutely all the web applications need a backend to store the Data. Databases like MySQL, Oracle, and SQL Server are reasonably popular these days.

Now motioning back to the original topic, let us discuss a few scenarios to exemplify the demand of Database testing along with Automation Testing.

#1) At times, we are required to make sure that the data entered from the UI is consistently reflected in the database. Thus we retrieve the information from the Database and verify the retrieved information against the information supplied from the UI. For example, registration forms, user data, user profiles, updates and deletes of user data. Thus, the test scenario to automate can be “To verify that the user’s information is successfully saved into the database as soon as the user registers in the application”.

#2) Another use case of performing database testing with Selenium WebDriver may arise when the user is directed to load the test data or expected data from the Database. Thus, in such a case, the user would make the connection with the Database using a third party API, execute queries to retrieve data from the dataset and then asserting the data fetched from the Database with the actual data which is populated on the Application UI.

#3) Another use case is to perform associative Database Testing. Assume that we performed an operation on the application’s UI, and we want to test the reflection in the Database. It may be a case that the impacted data resides in various tables of the database due to the association. Therefore it is always advisable to test data reflection at all the impacted areas.

Selenium, as I said, simulates the user interactions with the application under test. It can simulate keyboard events, mouse actions etc. But if the user desires to automate anything outside the vicinity of browser – web application interactions, then selenium can’t be of much help. Thus we require other tools or capabilities to perform end –to –end testing.

Thus, in all the above scenarios, we may require to perform Database Testing along with UI Automation. We may check business logics by manipulating the data and verifying its reflection. We may also check the technical aspects of the Database itself like soft delete, field validation etc.

Let us now move ahead with the actual implementation. Before developing Selenium WebDriver scripts to extract data from the data source, let us create test data in the database. For this tutorial, we would use MySQL as a database.

Creation of test data in the Database

If you haven’t downloaded the database yet, download it using the link. The user is expected to follow some basic steps to download and install the database.

=>> Read this tutorial to download and install MySQL Database.

Once the database is successfully installed, the user can launch the MySQL Command Line Prompt which would look like the following screenshot. The application might ask the user to enter the password. The default password is “root”.

Note: User can also find GUI based clients over the internet to connect with the database. To name a few, the user can download and install the Query Browser or Work Bench.

The next step is to create the test database with a few tables and records stored in those tables in order to make a connection with the database and execute queries. 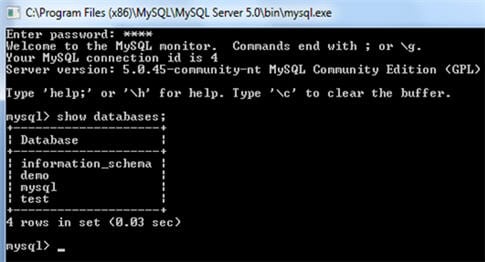 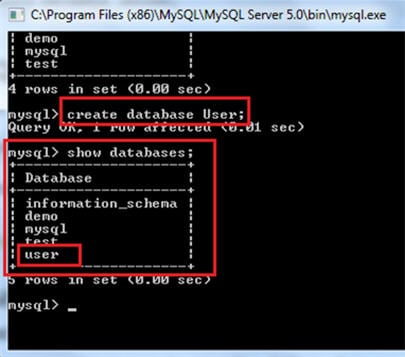 Take note that the database name as the user is created and can be seen in the list of databases.

Step 3) Type “use user;” to select the newly created database. Also, type “show tables;” to view all the tables available in the user database. 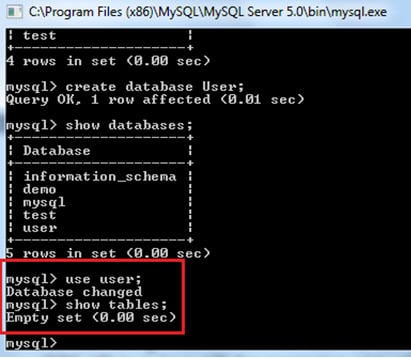 Take a note that Empty set is shown in the result of the “show tables;” query as there were no tables available within the user database.

Let us now a few tables and add records in them. 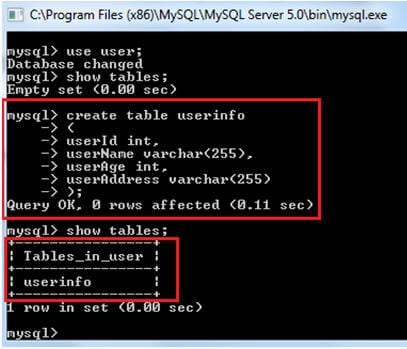 The next step is to add some data records in the “userinfo” table.

Step 5) Type the following command to insert data into the table a table for all the four fields 4 fields/columns (userId, userName, userAge, userAddress).

To view the added data, type the following command: 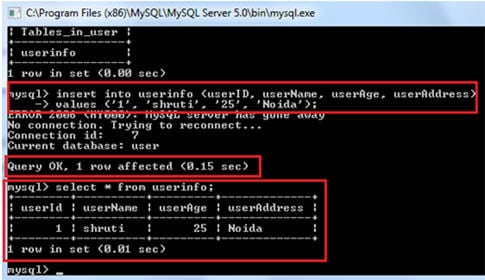 Similarly, you can add more data to your table and can create other tables as well.

Now, that we have created our database. We can move ahead and understand the implementation of automated queries to fetch the records from the database.

As we also iterated earlier, Selenium WebDriver is a tool for UI Automation. Thus, Selenium WebDriver alone is ineligible to perform database testing but this can be done using Java Database Connectivity API (JDBC). The API lets the user connect and interact with the data source and fetch the data with the help of automated queries. To be able to exploit the JDBC API, it is required to have Java Virtual Machine (JVM) running on the system.

We would keep our focus aligned with the following processes:

As said earlier, to be able to test database automatically from our Selenium WebDriver test scripts, we would connect with the Database via JDBC connectivity within our test scripts. Post to the connection, we can trigger as many CRUD (Create, Read, Update, and Delete) operations on the Database.

In this tutorial, we would discuss “Read operation and its variants” and about their implementation in Selenium WebDriver script. But prior to that, let us check the test scenario manually using the “MySQL command line”.

1) Open the Database server and connect to the “user” database.

2) List down all the records from the “userinfo” table. 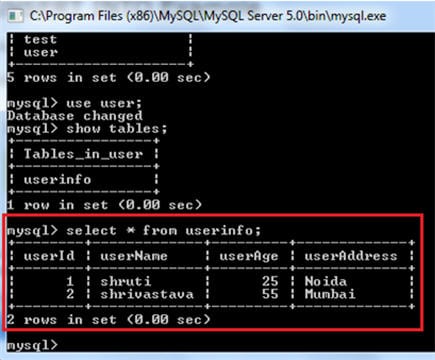 Notice that the read query will list down all the user data present in the userinfo table. The table is consisting of the following columns.

The result also shows that there is only a single data set present within the table.

To be able to access Database, the user is leveraged to choose amongst the diverse connector options available to connect with the Database. Most of the database connectors are freely distributed as “jar” files. As we are using MySQL as a data source, therefore we are required to download the jar file specific to MySQL.

The jar file can be downloaded from: here or here.

Step 1: The first and foremost step is to configure the project’s build path and add “mysql-connector-java-3.1.13-bin.jar” file as an external library.

Step 3: Copy and paste the below code in the class created in the above step.

The output of the above code is:

Where clause with single condition

Where clause with multiple conditions

Display userId with where clause

Thus, in the same way user can execute various queries on the database.

With this, Let us shed some light on result accessibility methods also.

As our entire series was focused on Selenium, the reader may get misled and can create an impression that this tutorial would teach to perform Database testing using Selenium, but like I mentioned a number of times earlier, anything that lies outside the periphery of UI testing, cannot be handled by Selenium. Therefore we introduce Java Database Connectivity (JDBC) API in order to perform Database Testing by embedding the code within the Selenium WebDriver scripts.

JDBC makes it possible for the java class to connect to the Database, retrieve data from the database or for the matter of fact perform any of the CRUD operations, manipulate the resultant data and close the connection.

Thus, the tutorial constitutes the basic sample implementation of the above-mentioned process.

Next Tutorial #29: We will move ahead with advanced Selenium topics. In the next tutorial, we will cover the Selenium GRID – which is used when you have to perform multi-browser testing and you have a large number of test cases.