Exploratory testing is not a testing methodology. Rather it is an approach to quality verification.

The procedure of exploratory testing execution resembles the discovery and investigation of any software product.

In comparison to traditional testing, an exploratory checking approach helps to detect more software bugs due to untypical scenarios.

But few people are sure that during exploratory testing, QA specialists can miss the core functionality of the product and leave it without verification.

This tutorial will give you a complete in-depth look at the Exploratory Testing Tours specified by James Whittaker which in turn would help to ensure complete and thorough exploratory testing. 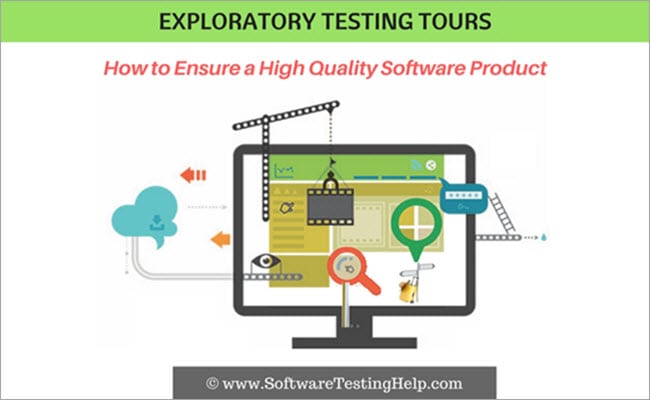 There are several techniques that help to ensure a wide test coverage of exploratory testing. One of such techniques is Exploratory Testing Tours.

While performing exploratory testing, test engineers resemble tourists who arrive in the place where they have never been before. Tourists would wish to visit and see as many places as possible within a limited timeframe.

A tour is a so-called plan of testing activities. It includes the objectives and tasks to focus on during exploratory testing. Usually, the duration of each tour is limited and should not exceed 4 hours.

James Whittaker was not the author of the idea of exploratory tours, but he developed his own approach to exploratory testing and specified the tours.

He pointed out 6 main districts with several tours available. 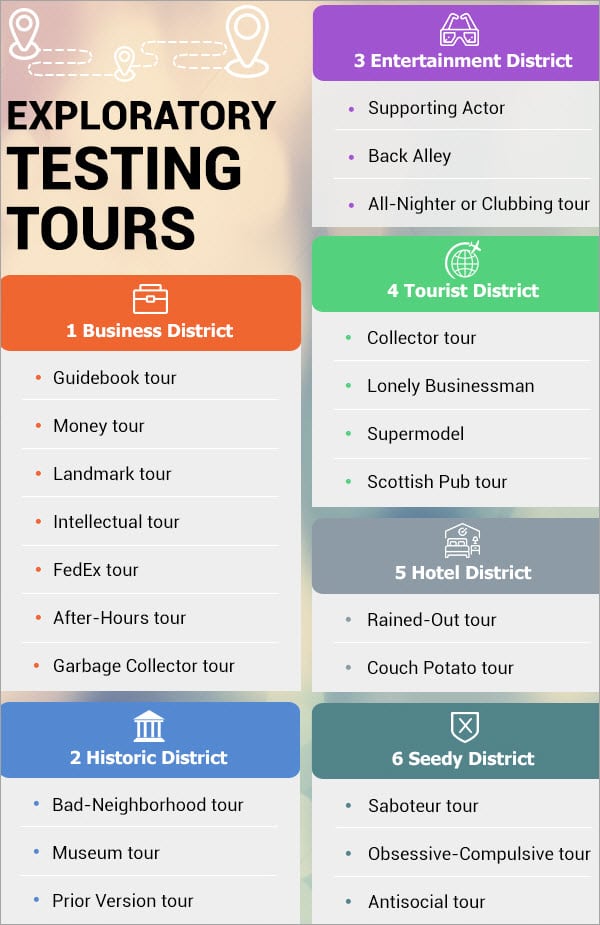 A business district is a place where people make money. Here you can find a lot of banks and office buildings. In several cases, tourists do not like to walk in the business district as there is nothing interesting to see.

For Example, a free trial period, every 5th delivery is free, etc.

Some tourists travel only according to the guidebook and never visit places that are not included or mentioned in the guide. This situation is relevant to the users who strictly follow each and every step specified in the support information, instructions, and user manuals.

Users may face such bugs as unclear/improper instructions, steps to follow do not correspond the actual work of software, inconclusive prompts, etc.

Every city has a special place that attracts all the tourists. For Example, people visit Paris to see the Eiffel Tower and the Louvre museum. The visiting card of Rome is the Colosseum.

In software testing, the advertising materials should correspond to the actual features of the application. Otherwise, after purchasing the application, the users will be disappointed, might leave a negative feedback, and never recommend your app to others.

A tourist selects the places to visit beforehand but without a detailed planning as he/she does with a guidebook. A test engineer defines a list of software features and executes testing based on that list in a step by step manner.

Thus, the tester does not miss the critical functionality and may detect bugs that block the system operability.

Every tourist group will include a person who would have read tons of books about the city, its history, cultural traditions and try to show his/ her brilliance all the time.

A tester also can execute untypical user scenarios to detect bugs. For Example, to enter a very long name for a file, adding a huge number of products to the shopping cart, enter invalid data to the form fields, etc.

Before reaching an addressee, an international parcel gets additional marks and ticks.

A software product also utilizes data that can be stored, modified, or even lost. A test engineer should follow the way in which the data is processed and validate it after all the operations. For Example, an app does not support Cyrillic alphabet or right-to-left writing.

At the end of the working day, people go home leaving their job for the next day. But when a user closes an application, that does not mean that it stops working totally.

The application can backup or archive data, receive updates, etc. Verifying the application in the background mode, a tester can detect irrational usage of traffic, memory leaks and so on.

Even the smallest town has garbage collectors who spend a couple of minutes near every house to collect garbage and go farther.

A typical tour includes a tour around old districts which is full of ancient buildings and places of historical value.

In testing, a historic district means the features connected with the previous product versions, code or functionality.

There are places that tourists should better try to avoid.

A bad-neighborhood tour is code fragments that contain a lot of bugs. Usually, one bug triggers another one and so on. A tester should check such buggy areas precisely.

In testing, a museum is a code that developers have not changed for a long time. The code may not work in a new environment. For Example, an Android version of the application operates properly. Developers may copy code or files that are improper for an iOS version.

The restoration of buildings is similar to software updates. Users should easily adapt to the updated UI and functionality that can change the user experience.

A tester should take all the modifications into account.

After a long walk, the tourists wish to have some fun. An entertainment district symbolizes the option of software customization.

There are 3 tours in the Entertainment district namely:

Entertainment district focus on the functionality related to the core one. The tours can help to detect UI bugs, localization errors, usability issues, and uncritical functional bugs.

Every city and town have places where tourists spend a lot of money. Here there are many restaurants and gift shops.

In testing, a Tourist district means to look through the software functionality without focusing on any detail. A tester may follow Collector tour and verify software artifacts, E.g., everything that a user is able to save.

Also, there are Lonely Businessman (to get to the feature using the longest way), Supermodel (GUI verification), and Scottish Pub tour that includes the analysis of users’ feedback.

Usually, tourists stay in hotels where they can take some rest and relax after a busy day. In testing, a Hotel district is a place to verify the non-critical functionality.

Sudden rain can spoil the planned promenade and make tourists stay in the hotel. A tester verifies the system behavior by canceling the previous operation and checks the after-effects of his actions.

A tourist group may include an apathetic person who is not interested in anything.

In testing, a QA specialist should verify the system functionality by following a default way without making any settings.

A seedy district is too dangerous for tourists. In testing, it is such software areas that attract shifty users who strive to crash the system.

Testers should mind that and try to simulate the actions of such users. They can follow Saboteur tour and try to crash the system by limiting the resources that are required for proper operation.

An Obsessive-Compulsive tour means to repeat the same action several times and monitor the system behavior.

The idea of the Antisocial tour is to perform the actions that contradict the app logic, for Example, enter invalid data.

During the opposite sub tour, testers perform the actions that the users will conduct unlikely, for Example,  to add more than 10 000 tracks to a playlist.

According to the wrong turn sub tour, a tester performs an ordinary action but in the wrong sequence.

We had an in-depth look at the tours specified by James Whittaker which help to ensure complete and thorough exploratory testing.

I hope you enjoyed this informative tutorial on Exploratory Testing Tours.

About the Author: Anastasiia Piatak is a Program Manager at QATestLab and an independent provider of QA and testing services. Anastasiia has more than 2-year experience in management, software testing, project management, and presales. She leads the team of more than 20 members and currently has 10+ active projects.

Do you have something new to share about Exploratory Testing Tours? Feel free to express your thoughts in the comments section below.