Some bugs are major which can’t be ignored. Take an e.g. of Hospital Patient Management software in which the records of patient and medicines corresponding to that patient are maintained; if there is a mismatch in the record it can harm the patient health. So in this case testing is very important. 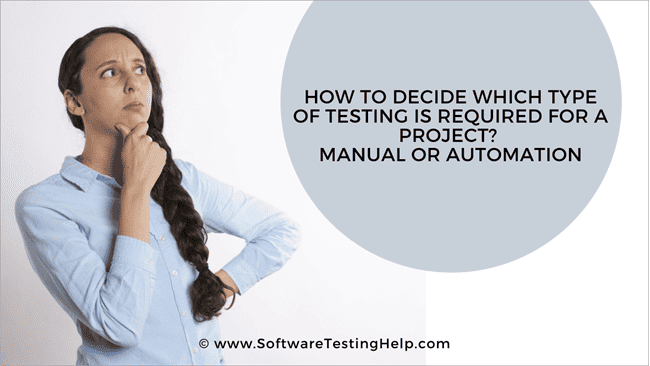 Now the next question is – which type of testing should be performed?

“Automation is a part, but Manual is Heart of testing”.

Decision of choosing it depends upon your common sense and test scenarios.

These are various test scenarios on the basis which you can take decision easily:

If the project size is large and complex then Automation testing is the best option but if the project size is small then it can easily be tested through manual process.e.g. There is Banking software for marinating the records of account as there are large number of people who have their account with that bank So Automation testing is the best way to test it.

If the number of human resource is available in adequate amount then manual testing can be performed easily but if the human resources are less the automation testing is the best option.

4. Number of times a test scenario needs to be tested

5. Changes in the code

If the changes made in the code are frequently then automation testing should be performed. Sometimes it happens that on making changes in the one module can harm the other module so it’s important to test the whole modules after making changes to one of the module and this can easily be tested through automation process.

6. Whether to test Parallel or sequentially

When you need to run the test at same time but on different machines then automation testing is performed because in case of manual testing you have to perform the test sequentially.

7. How to do Random/Ad-hoc testing

When you have to check the displays randomly then manual testing is performed.

“More you play, More you will find.”

The meaning of above phrase is that you will find more bugs by playing more with the features of the software. For playing with features, it’s very important that a tester need to be creative.

8. How to test image and font size

It’s not possible to test the images and font size through automation process these features can only be tested through manual process.

If the time period is less for the testing phase then automation testing is the best option.

10. Number of testers wants to see the result

When one person is doing manual testing the rest of the team can’t see the result being run but with automation process multiple people can sign into the system and see the result.

Automation tools are just act like a robot in which once you write the test scripts you have execute it as per requirement and it doesn’t need any human judgment. In manual testing,a tester has to find bugs using that software. A tester uses the software like end user and tries to break the things by putting the unexpected scenarios.

In case of manual testing if anything is added in the program then you have write the test cases again and again depending upon the number of times the things are added in the program. This leads to a huge loss of time and human affords but with automated tests, if you are adding anything to the program, you have to rerun all of the required tests instantly – the tests are already set up.

Manual testing is done the basis of human judgment and experience. Using this process those areas get tested that may not have been tested or required because through manual testing you can test the every part of the software.

Layout and Usability Issues are tested only by manual process. As observation is required in both cases and tester has to test the things by considering himself as an end user because it’s very important that your software should be user friendly.

Manual testing is the best option to perform explanatory testing as you have to explore the software to identify errors.

Choosing right testing type also depends on the type of methodology. In the scenario where requirements change rapidly, manual testing is preferred over automation testing.

Error handling, disaster and recovery, these issues can only be tested through manual process. For testing these issues tester has to test the scenarios like powering off servers, hard disk crash etc. It’s not possible to test these things using test scripts.

Automation testing helps in Load, Volume, Stress and Capacity testing. Suppose a system is created in which 100 users can work at the same time. So, in order to check the system whether it handles the load of more than 100 people we perform this testing.

For testing GUI displays automation testing is performed. There are many tools used for recording user actions and then replay them any number of times. This is helpful for comparing actual and expected results.

Manual and Automation testing both are important at their own place but the motive is to do quality testing. So the most important is use of right testing at the right place, time and environment.