This tutorial explains what is Python Docstring and how to use it to document Python functions with examples:

Functions are so important in Python to an extent that Python has tens of built-in functions. Python also gives us the possibility to create functions of our own.

However, functions don’t end just at creating them, we have to document them so that they are clear, readable, and maintainable. Also, functions have attributes that can be used for introspecting, and this enables us to handle functions in diverse ways. 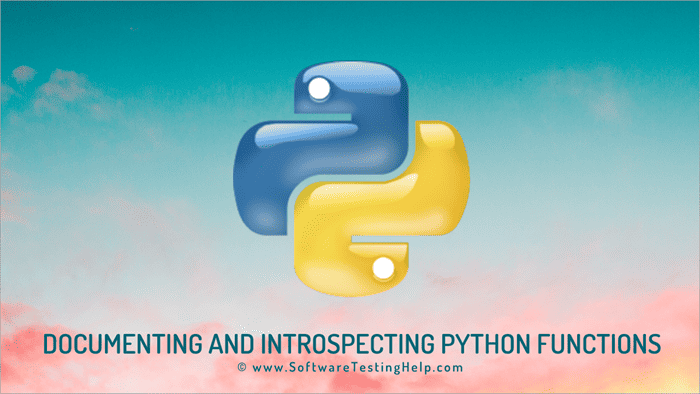 In this section, we will have a quick look at what functions are and this has been fully covered in Python Functions.

Functions are like mini-programs within a program and group a bunch of statements so that they can be used and reused throughout different parts of the program.

Most of us find it hard to document our functions as it could be time-consuming and boring.

However, while not documenting our code, in general, may seem okay for small programs, when the code gets more complex and large, it will be hard to understand and maintain.

This section encourages us to always document our functions no matter how small our programs may seem.

Importance Of Documenting A Function

There is a saying that “Programs must be written for people to read, and only incidentally for machines to execute”.

We can’t stress enough that documenting our functions helps other developers(including ourselves) to easily understand and contribute to our code.

I bet we have once come across a code we wrote years ago and we were like “What was I thinking..” This is because there was no documentation to remind us of what the code did, and how it did it.

That being said, documenting our functions or code, in general, bring the following advantages.

According to the PEP 257 — Docstring Conventions

“A docstring is a string literal that occurs as the first statement in a module, function, class, or method definition. Such a docstring becomes the __doc__ special attribute of the object.”

Docstrings are defined with triple-double quote(“””) string format. At a minimum, a Python docstring should give a quick summary of whatever the function is doing.

A function’s docstring can be accessed in two ways. Either directly via the function’s __doc__ special attribute or using the built-in help() function which accesses __doc__ behind the hood.

NB: The docstring above represents a one-line docstring. It appears in one line and summarizes what the function does.

Run the following command from a Python shell terminal.

A multi-line Python docstring is more thorough, and may contain all the following:

Any other information that may seem helpful to us.

We also notice a break-space after the enclosing triple-quote before our function’s body. 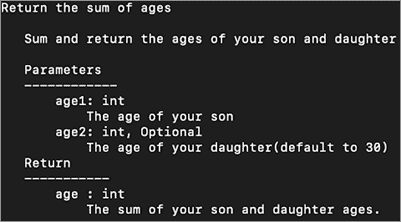 NB: This is not the only way to document using docstring. Read on for other formats too.

The docstring format used above is the NumPy/SciPy-style format. Other formats also exist, we can also create our format to be used by our company or open-source. However, it is good to use well-known formats recognized by all developers.

Some other well-known formats are Google docstrings, reStructuredText, Epytext.

How Other Tools Make Use Of DocStrings

Most tools like code editors, IDEs, etc make use of docstrings to provide us some functionalities that can help us in development, debugging, and testing.

Code editors like Visual Studio Code with its Python extension installed can be better and effectively assist us during development if we properly document our functions and classes with docstring.

Open Visual Studio Code with the Python extension installed, then save the code of example 2 as ex2_dd_ages.py. In the same directory, create a second file called ex3_import_ex2.py and paste in it the code below.

Let’s not run this code but let’s hover (put our mouse over) add_ages in our editor.

We shall see the function’s docstring as shown in the image below.

We see that this helps us to have a preview of what the function does, what it is expecting as input, and also what to expect as a return value from the function without needing to check the function wherever it has been defined.

Python has a test module called doctest. It searches for pieces of docstring text beginning with the prefix >>>(input from the Python shell) and executes them to verify that they work and produce the exact expected result.

This provides a quick and easy way to write tests for our functions.

In the docstring above, our test is preceded by >>> and below it is the expected result, in this case, 20.

Let’s save the code above as ex4_test.py and run it from the terminal with the command. 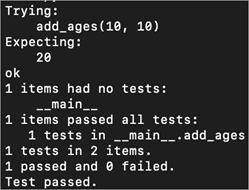 Apart from docstrings, Python enables us to attach metadata to our function’s parameters and return value, which arguably plays an important role in function documentation and type checks. This is referred to as function Annotations introduced in PEP 3107.

As an example, consider a function that rounds up a float into an integer.

There are two ways of adding annotations to a function. The first way is as seen in the above where the object annotations are attached to the parameter and return value.

The second way is to add them manually via the __annotations__ attribute.

Recall from the syntax above that annotations can be any valid expression.

NB: If a parameter takes a default value, then it has to come after the annotation.

Annotations on their own don’t do much. The Python interpreter doesn’t use it to impose any restrictions whatsoever. They are just another way of documenting a function.

Example 10: Pass argument of a type different from the annotation.

We see that the Python interpreter doesn’t raise an exception or warning.

Despite this, annotations can be used to restrain data type arguments. It can be done in many ways but in this tutorial, we shall define a decorator that uses annotations to check for argument data types.

Example 11: Use annotations in decorators to check for an argument data type.

NB: The function above is a decorator.

Lastly, let’s define our function and use the decorator to check for any argument data type.

Function objects have many attributes that can be used for introspection. In order to view all these attributes, we can use the dir() function as shown below.

Example 13: Print out the attributes of a function.

NB: The above shown are the attributes of user-defined functions that may be slightly different from built-in functions and class objects.

In this section, we will look at some attributes that can help us in function introspection.

We didn’t include __annotations__ in the table above because we already addressed it earlier in this tutorial. Let’s look closely at some of the attributes presented in the above table.

It is usually referred to as a  primitive form of annotation. Though it is not a very common practice, it can become handy for documentation.

Example 14: Assign an arbitrary attribute to a function that describes what the function does.

Closure enables a nested function to have access to a free variable of its enclosing function.

For closure to happen, three conditions need to be met:

Example 15: Demonstrate the use of closure in nested functions.

The enclosing function (divide_by) gets a divisor and returns a nested function(dividend) that takes in a dividend and divides it by the divisor.

Open an editor, paste the code below and save it as closure.py

So, what’s the use of __closure__. This attribute returns a tuple of cell objects that defines the attribute cell_contents that holds all variables of the enclosing function.

Example 16: In the directory where closure.py was saved, open a terminal and start a Python shell with the command python and execute the code below.

NB: __closure__ returns None if it is not a nested function.

Example 17: In the directory where closure.py in example 15 was saved, open a terminal and start a Python shell with the command python and execute the code below.

__code__ defines the attributes co_varnames that holds the name of all the parameters of a function and co_argcount which holds the number of a function’s parameter except those prefixed with * and **.

Answer: In Python, type hints don’t do much by themselves. They are mostly used to inform the reader of the type of code a variable is expected to be. The good news is that its information can be used to implement type checks. This is commonly done in Python decorators.

Answer: A docstring is the first string literal enclosed in triple-double quotes (“””), and immediately follows a class, module, or function’s definition. A docstring generally describes what the object is doing, its parameters, and its return value.

Q#3) How do you get a Python Docstring?

Answer: Generally, there are two ways of getting an object’s docstring. By using the object’s special attribute __doc__ or by using the built-in help() function.

Q #4) How do you write a good Docstring?

In this tutorial, we looked at function documentation where we saw the importance of documenting our functions and also learned how we can document with docstring.