Learn what is pytest, how to install and use Python pytest with examples in this comprehensive pytest tutorial:

A test is a code that checks the validity of the other code. Tests are designed to help in gaining confidence that what you wrote is working. It proves that the code is working as we want and get a safety net for future changes. 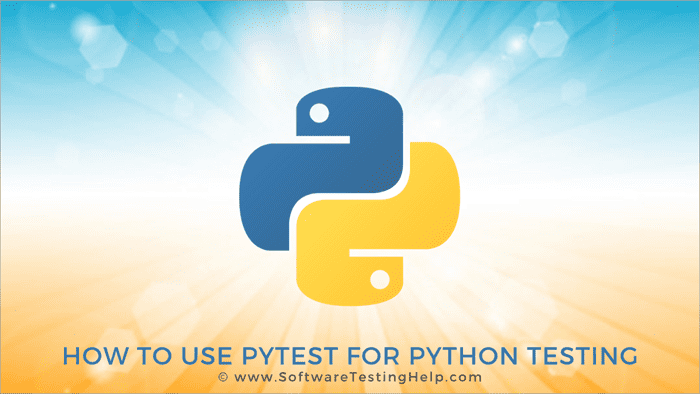 pytest is the framework that makes it easy to write, test, and scale to support complex testing for the applications and libraries. It is the most popular Python package for testing. The basis for a rich ecosystem of testing is plugins and extensions.

The way pytest is designed is as a very extensible system, easy to write plugins and there are a lot of plugins present in the pytest that are used for various purposes. Testing is very important before delivering the code in production.

It is a mature full-featured Python tool that helps to write better programs.

Many programmers perform automatic testing before the code goes into production.

How To Install pytest In Linux

Make a directory with a name suitable for you in which the Python files will take place.

How To Use pytest Using Python

We are going to write a simple program to calculate the area and the perimeter of a rectangle in Python and perform testing using pytest.

Create a file with the name “algo.py” and insert the below.

Create a file with the name “test_algo.py” in the same directory.

Thus, there can be scenarios that we need generally for connecting the data source or anything before executing the test case.

Fixtures are the functions that will run before and after each test function to which it is applied. They are very important as they help us to set up resources and tear them down before and after the test cases start. All fixtures are written in the `conftest.py` file.

Now, let us understand this with the help of an example.

In this example, we are using fixtures to provide the input to the Python program.

Create three files named “conftest.py”(is used to give the output to the Python program), “testrough1.py” and “testrough2.py” (both the files contain the Python functions to perform the mathematical operations and get the input from the conftest.py)

In the “conftest.py” file insert the following: 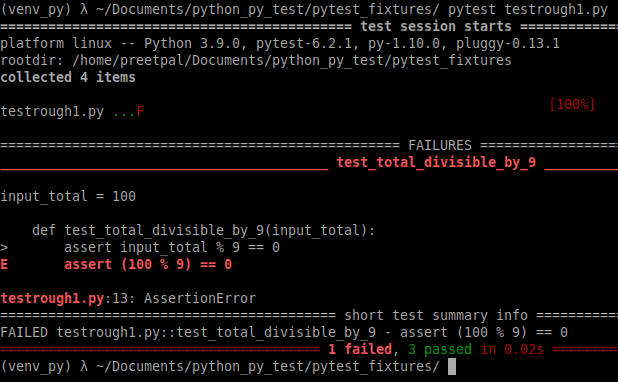 In the output, we got an assertion error because 100 is not divisible by 9. To correct it, replace 9 with 20.

Where To Add Python Fixtures

Fixtures are used instead of class xUnit style setup and teardown methods in which a particular part of code is executed for each test case.

The major reasons to use the Python Fixtures are :

When To Avoid pytest Fixtures

Fixtures are good for extracting the objects that we are using in multiple test cases. But it is not necessary that we need fixtures every time. Even when our program needs a little bit of variation in the data.

The scope of pytest Fixtures indicates how many times a fixture function is invoked.

Assertions are the way of telling your program to test a certain condition and trigger an error if the condition is false. For that, we use the `assert` keyword.

Let us see the basic syntax of Assertions in Python:

Let’s consider that there is a program which takes the age of a person.

Now, let us take a case in which we incidentally give the age in negatives like `get_age(-10)`

Which is quite weird! This is not what we want in our program, In that case, we will use assertions. 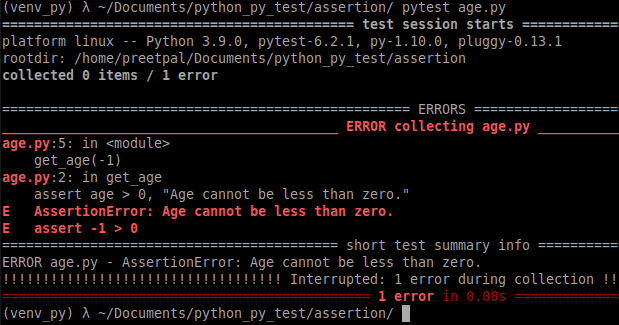 In the given example we are performing basic addition of two numbers where `x` can be any number. 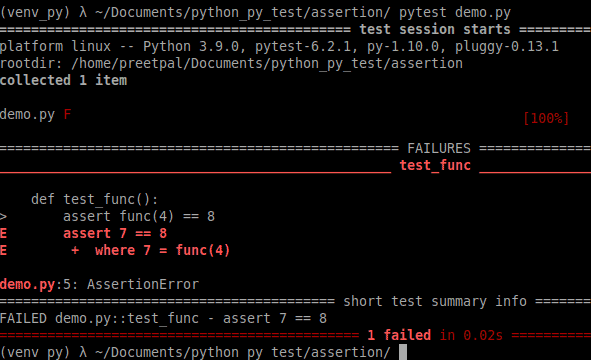 In the output, we are getting the assertion error because 8 is the wrong result as 5 + 3 = 8 and the test case is failed.

Basically, this is the way to debug the code, it is easier to find the errors.

Parametrization is used to combine the multiple test cases into one test case. With parameterized testing, we can test functions and classes with different multiple sets of arguments.

In parametrize, we use `@pytest.mark.parametrize()` to perform parameterization in the Python code.

In this example, we are calculating the square of a number using the parametrization.

In `parametrize/mathlib.py` insert the following code that will return the square of a number.

Save the file and open the second file` parametrize/test_mathlib.py`

There will be a number of test cases to test the code which is quite weird. The code for the test cases is the same except for the input. To get rid of such things, we will perform parameterization.

Replace the above test cases with the below:

The test case will pass in both manners, just parametrization is used to avoid the repetition of code and get rid of the lines of code.

In this example, we are performing multiplication of numbers and comparing the output(`result`). If the calculation is equal to the result then, the test case will be passed otherwise not.

In the output, it will throw the error because in the (3, 34) case we are expecting (3, 33). The assertion in the Python code will help to debug the errors in the code. 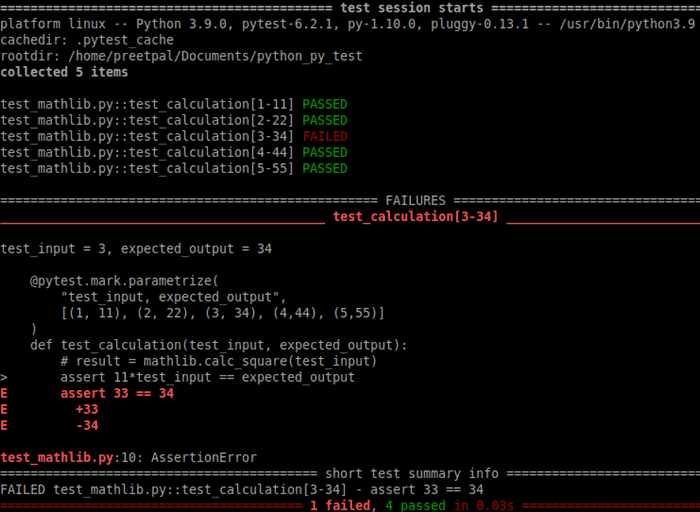 The correct program is:

Decorators allow us to wrap the functions in another function. It avoids code duplication and cluttering the main logic of function with additional functionality (i.e. time in our example).

The problem that we face generally in our programs is code repetition/duplication. Let’s understand this concept with an example.

Create a file `decorators.py` and insert the following code to print the time taken by the function to calculate the square of a number.

The above code is code duplication.

The second problem is that there is a logic in the program which is calculating the square and we are cluttering the logic with the timing code. It thereby makes the code less readable.

To avoid these problems we use decorators as shown below.

Answer: We can run the specific test from the test file as

Q #2) Should I use pytest or Unittest?

Answer: Unittest is the testing framework that is built in the standard library. You don’t need to install it separately, it comes with the system and is used to test the internals of the core of Python. It has a long history which is a good solid tool.

But presenting a united ideal for reasons, the biggest reason is `assert`. Assert is the way in which we do testing in Python. But if we are using unittest for testing then, we have to use `assertEqual`, `assertNotEqual`, `assertTrue`, `assertFalse`, `assertls`, `assertlsNot` and so on.

Unittest is not as magical as pytest. pytest is fast and reliable.

Answer: Fixture with `autouse=True` will be initiated first than the other fixtures of the same scope.

In the given example, we see that in the `onion` function we define the `autouse = True` which means it will be initiated first among the others.

Q #4) How many exit codes are there in pytest?

There are six exit codes

Answer: No you cannot use TestNG directly in Python. One can do Python Unittest, pytest, and Nose frameworks.

Answer: Fixtures with `scope=session` are of high priority i.e. it will trigger only once at the start, no matter where it is declared in the program.

In this example, the fixture function goes through all the collected tests and looks if their test class defines a `ping_me` method and calls it. Test classes may now define a `ping_me` method that will be called ahead of running any tests.

In the `conftest.py` insert the following:

Run this command to see the output:

In a nutshell, we covered the below in this tutorial: