This video tutorial explains Python Functions and their types like user define & built-in functions. You will learn to define and call a Python Function:

Though the creator of Python “Guido Van Rossum” didn’t intend Python to be a functional language, functions play a major role in Python.

We can define a Function as a box that encloses statements to be used and reused whenever the need arises. In this tutorial, we will discuss Python functions along with simple examples.

Python functions have certain properties that make them ideal for large and complex programs. Python has three types of functions – Built-in, User-defined and Anonymous functions. 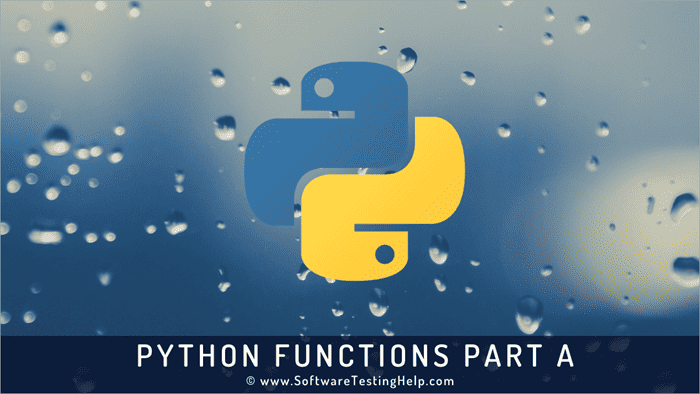 Why Use Python Functions

Functions are a great deal, even for other programming languages. Functions are important in Python at the point that we have built-in functions (functions pre-defined in Python).

Before we get into the details, let’s get an understanding of why functions are important:

Don’t be worried if the above properties are confusing. As we progress in this tutorial, we shall understand them better.

In Python, functions can take other functions as arguments and/or return as a result of a function. This makes life easy for some functions like map, filter which are some of the well-known higher-order functions.

Example 1: Using the map() function, compute a list of integers from a string of numbers.

The built-in map function will take in two arguments, a function (int) and our string of numbers. It will then pass each element of the string into its argument function to be computed. This wouldn’t have been possible if Python functions weren’t of higher-order.

As mentioned above, the functions enclose statements. This saves us from writing the same statement, again and again, each time when we need them and this usually leads to duplication of code.

In Python, functions help to split systems into pieces(modules), thereby making them easier to manage and maintain.

Functions enable us to implement a very powerful algorithm design paradigm called “Divide-and-Conquer” that basically breaks down an idea into two or more sub-ideas, and makes them simple enough to implement.

Imagine that we want to implement the process of us “leaving the house to work” every morning.

If you are someone who:

Then you will realize a couple of sub-processes that govern the process of us “leaving the house to work”.

A Python function has the following syntax:

As seen above, a Python function begins with the def keyword, followed by the function’s name, parameter(s) in parenthesis(()), then a colon, and finally, the function code which is indented and usually contains a return statement that exits the function and passes back an expression to the caller.

To be more thorough, let’s consider the below function that multiplies two numbers and returns the result.

We can see that a function has the following key-parts

function name: The function’s name holds a reference to the function object once created by the def statement. This permits us to define functions once and call them in many parts of our code. In Python, an anonymous function doesn’t have a function’s name.

function parameters: When a function is defined to take in data, the parameters are used to hold that data and pass it into the function’s body.

Colon: The colon(:) is a cue for the function’s body. That is, the function body gets indented after the colon.

A function caller can control the data that gets into a function using the function’s parameters. A function without parameters can’t receive data from the caller. As we shall see later in this section, parameters and arguments have different definitions, though arguably used to mean the same.

The terms parameter and argument are arguably used for the same thing. However, from a function’s perspective, a parameter is a placeholder (variable) that is placed inside parentheses in a function definition while an argument is a value that is passed to the function when it is called.

Example 2: Consider figure 2 above and the code below, the parameters here are x and y. But when we call the function with answer = multiply(3, 4) as seen below, we pass in the values 3 and 4 as arguments.

Before we delve into defining function parameters, it is worth noting that functions can be defined without parameters. In this case, data can’t be passed into the function by the caller.

Example 3: Define a function called display that takes in no arguments and prints the “Hello World!”

In Python, if a function is defined with parameters and the caller doesn’t pass in arguments that match the number of parameters, then a TypeError will be raised.

Example 4: Check the sample code below.

At times, we will like to define our function with parameters but will expect some parameters to pass in some default values into the body of the function when we don’t provide them with arguments.

This can be achieved by giving default values to the respected parameters in the function definition.

Consider the code sample in example 4 above. When the function is called, only one argument is passed, which is given to the parameter x. However, y doesn’t receive any argument. To prevent Python from raising an exception when this happens, we can give parameter y a default value during definition.

Example 5: Give the parameter y a default value.

A function can take in as many positional arguments as possible. However, we need to be sure that the number of arguments passed should match the number of parameters defined in the function parenthesis.

Example 6: Say that we want to add a number of integers but we don’t know at run time how many integers we want to add. This can cause us a lot of trouble if we use positional parameters.

Check the sample code below.

Though this works, it can become inconvenient as we will need to create a list of all the arguments before passing them to the function.

Example 8: The simplest way to deal with this is to use the *args that allows us to pass as many positional arguments without the need to know the count.

Example 9: If we have an iterable and we want to pass each item into our function that was defined with *args, then we can use the unpacking operator(*) to do so.

In the previous section, we saw *args. In this section, we shall look at **kwargs, which somehow works the same, but unlike *args that deal with positional arguments, **kwargs deals with keyword arguments.

Before we look at some examples, it’s worth noting that:

Example 10: The code below defines a function with **kwargs parameter, receives keyword arguments, and concatenates their values.

Example 11: If we have a dictionary and we want to pass each key-value pair into our function that was defined with **kwargs, then we can use the unpacking operator(**) to do so.

The terminologies function and method are sometimes used interchangeably. However, in software development, methods are simply functions defined in a class i.e. they are attached to an object and unlike functions, they can’t be called by name only.

For example, we have the Python built-in math module. After importing it, we can access its methods such as sqrt, exp, and more. These are called methods as they are defined in the module. But, they have all defined the same functions that we have been treating in this tutorial.

Example 12: Import the math module and use its appropriate method to find the square root of 44.

In a program, the variables may or may not be accessible in every part of the program. Variables can only be accessible in their scope and Python has four types of variable scope(Local, Enclosing, Global, Built-in) that build the foundation of the LEGB rule(more on this later).

A variable defined in a function is only accessible within that function and exists as long as the function is executing. Meaning we can’t access a function’s local variable outside its body.

Example 13: Consider the example below.

From the output above, accessing the function’s local variable outside its body raised a NameError exception.

Enclosing scope exists in nested functions i.e. a function defined inside another function.

Example 14: Consider the code below

Variables defined at the top level of our script or module or program becomes global variables and are accessed anywhere within the program i.e. any function defined in that program can access these variables.

Example 15: Consider the example below.

All we have to do is declare the specific variable with the global keyword as below.

Example 16: Let’s modify example 13 to make the function’s local variable global and access it outside its body.

This scope is the largest in Python and it contains pre-built functions, reserved words, and other properties pre-defined in Python.

Based on the LEGB rule, the last scope the Python interpreter will look up names and if not found, a NameError is raised. This means that any variable defined in the built-in scope can be accessed anywhere in the program without being defined by us(unlike global scope).

In Python, a return statement ends the execution of its function and returns a specific value to its caller.

Few things that we should know about Return statements are:

Example 18: Create a function that takes in two numbers and returns their sum.

A return statement doesn’t only return a single value. It can ‘return’ multiple values defined in any data structure like tuple, list, dictionary, etc.

Example 19: Modify example 18 to return the sum and product of its two-argument numbers.

A return statement can also return a function. As we saw earlier in this tutorial, functions are first-order objects and higher-order that make them possible to be returned from a return statement.

Q #1) Can you return a print statement in Python?

In a nutshell, returning a print statement will return None.

Q #2) How do you end a function without returning in Python?

Answer: Python functions always return a value. If not explicitly defined, it will return None and exit the function.

Q #3) How many types of functions are there in Python?

In Python, there are 3 types of function namely:

A function is a block of code that is used to perform some specific actions. A function provides higher modularity and code reusability.

Functions help to break a large code into smaller modules.

Simply defining a function is useless unless you call it.

We can define any number of parameters while defining a function.

A return statement is used to return a value from the function.

In python, we can call a function using 4 types of arguments:

Required arguments are the arguments that are passed to a function in sequential order, the number of arguments defined in a function should match with the function definition.

When a function is called without any arguments, then it uses the default argument.

If you want to process more arguments in a function than what you specified while defining a function, then these type of arguments can be used. 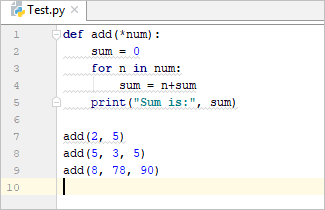 In this tutorial, we looked at the user-defined functions which is a type of function in Python. We discussed some of its properties and saw why we should use functions.

We also looked at defining functions where we addressed: parameters, arguments, variable scopes, and return statements.