Flask and Django are Python-based web development frameworks. This tutorial compares Django vs Flask in detail. Flask vs Node is also covered briefly:

It has always been a pervading dilemma when it comes to the question of selecting a Framework for your next project. Every few months, you see new technology and a framework that overcomes the weakness of the previous one that you used.

A framework is more like a silent culture, and a set of conventions that you must follow to be more relevant and productive in this ever-changing world of technology. Comparatively, Web development moves much faster than Desktop development.

=> Read Through The Flask Training Series 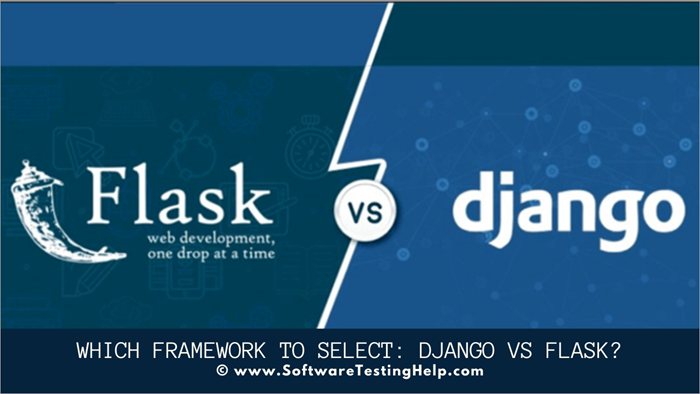 In this tutorial, we draw out a comparison between Django and Flask in detail. Flask and Django are Python-based web development frameworks. Many are moving towards lightweight microframeworks. These frameworks are agile, flexible, small, and help to develop microservices and serverless applications.

Considering the popularity of NodeJS, We have also provided a prodigy comparison between Flask and Node under the Flask vs. Node section. Evaluating Django and Flask on the following features will help you in selecting one over the other.

Both frameworks provide a bootstrapped admin application. In Django, it is built-in and comes with the default installation. However, in the case of Flask, you need to install Flask-Appbuilder to have an admin interface.

Meanwhile, remember to create a superuser in Django and admin in the case of Flask so that you can log into the admin backend using the browser.

Django is shipped with a default inbuilt ORM which outrightly supports interacting with RDBMS such as Oracle, MySQL, PostgreSQL, SQLite, etc. This ORM also supports the generation and management of migrations. It is relatively more comfortable to create database models with inbuilt validations.

Flask also doesn’t impose any one particular method and is available to be used with various extensions that support similar features as outlined in the case of Django. We have given examples of Flask-SQLAlchemy, Flask-Migrate, Flask-MongoEngine, in one of the tutorials of the series.

Both frameworks have mechanisms to declare method based and class-based views. In the case of Django, routes and views are mentioned in separate files. Also, we always need to pass the request object explicitly.

On the other hand, in Flask, we can use a decorator to mention the routes for the corresponding handlers. The request object in Flask is global and is just available without any explicit passing around. We have detailed the concepts of using views and routes in one of our tutorials.

Django Forms are inbuilt into the framework and require no installation. Forms are quite essential to applications, and in Django, the Forms can be passed to template tags, and are available to be rendered in templates. However, in the case of Flask, we need to use Flask-WTF.

We also made use of Flask-Appbuilder to create forms. Moreover, WTF-Alembic can be used to generate HTML forms based on database models.

Both the frameworks support Jinja2 templating, and both support the serving of static files with inbuilt functions to generate the URLs of the resources and is a pretty common pattern in all frameworks these days.

Although there are different ways to pass the variables and to render the templates in their particular view methods, Both the frameworks have the same syntax of accessing variables in templates.

Django, because of its sheer size and complexity, is less flexible than Flask. Flask can be easily extended with the help of a vast number of extensions that it supports. Therefore, it needs more time and effort to set up Flask because we need to evaluate more extensions.

The freedom given to developers in a way results in slower development and delivery. On the other hand, Django follows a set of already established conventions and follows the archetypes that require less deviation from the project goals and objectives.

It almost requires the same amount of time to learn both Django and Flask. Flask has a smaller API; therefore, people might be able to finish it faster as far as the core framework is concerned. It becomes equally challenging when it comes to using its extensions. It might become cumbersome soon.

However, just because everything is not packed in one package, it is easier to practice separation of concerns in the case of the Flask framework.

We recommend that you learn the patterns and not the syntax that is followed. Both Django and Flask have excellent documentation. You can easily follow it while developing a feature.

When you work on a larger project with larger teams, it is better to take the benefit of the maturity of Django and the extensive contributor support it has. If your project is smaller and requires a lesser number of developers, it is better to go with Flask.

Moreover, if your project is going to last long, then Django is the right choice; otherwise, you can select Flask.

Earlier Django was considered to be the right choice when there was a requirement for full-fledged enterprise-scale web applications. But, today Flask is equally mature and can serve well for the same conditions.

However, developers tend to choose Flask more for developing small or static websites, or while implementing quick to deliver RESTful API web services.

Having skilled resources in the convention of the framework that you use pays off. You can expect faster development, faster testing, speedier delivery, and quicker issue fixes.

It is quite easy to find new developers in the case of Flask. However, it is challenging to find skilled resources in Django. There are not many ready to be hired by Django developers. Moreover, the Django framework is quite old, and therefore, most of the new hires are expensive to hire when compared to the ones who are skilled in the Flask framework.

New technical graduates also are picking up light frameworks such as Flask because industry trends are towards creating applications with decoupled microservices or the technology that supports the creation of the serverless implementation. Javascript is widely used along with the frameworks that are easier to use and are more popular.

Therefore, we can expect more and quicker support if we have some issues and queries that need resolution. Contrary to typical assumptions, the No. of users of the Flask project is higher than that of Django.

One concerning fact about Flask is that there might not be a stable extension for a particular task. Therefore, the work of filtering out the best one remains with the user of the extension.

For example, we used Flask-Twitter-oembedder to work with Twitter’s API in the last tutorial, but this extension had some issues because of which we had to switch from Flask-Cache to Flask-Caching.

We even had to include a custom installation statement to install Flask-twitter-oembedder from our updated Github repo rather than mentioning it in our requrements.txt file of the project.

Frequent maintenance is a typical challenge that you will face with an open-source project. Support and management of the open-source project are usually tied to paid services. You might have to wait for a long time to get a few issues fixed from the contributors to the project.

Have a look at the below-given comparisons. With the increase in requests, the performance of Flask remains almost the same. However, Django takes more time to render templates after fetching data using the ORM. 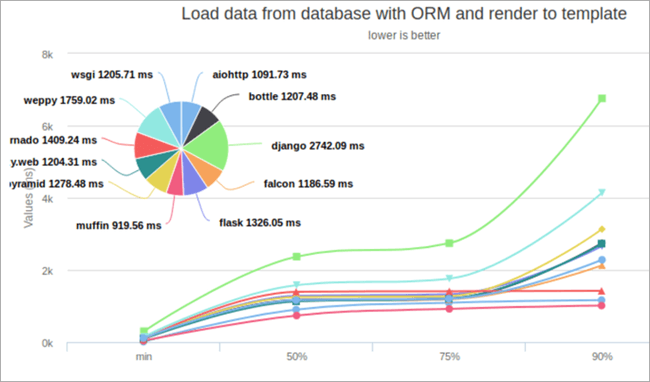 With respect to the web development stack, it turns out that developing for the web requires an amalgamation of various technologies. We need to break down a web application into a frontend and backend. The front-end part of the application is best developed in the technologies that run in the browser, such as JavaScript, HTML, and CSS.

Generally, The backend is developed in languages that are suitable for the server-side and can interact with the underlying operating system, connected databases, or the network when required.

However, a JavaScript-based framework called NodeJS changed the above-given view and enabled Developers to have consistency and uniformity across the front end and back end development for web applications. Developers could develop for the back end using JavaScript.

In this Flask vs Node section, we compare Flask, which is a Python programming language based framework, with Node, which is based on Chrome’s JavaScript runtime on various criteria such as architecture, speed, community support, etc.

Q #1) What should I learn first, Django or Flask?

Answer: It is better to go with Flask first. Once you gain a little experience in web development, you can take up Django. Django assumes that you already know how web applications work, and it takes care of most of the functionality by itself.

Q #3) What companies use Flask?

Answer: Some of the companies that use Flask are Reddit, Mailgun, Netflix, Airbnb, etc.

We should not really get fixated with one framework for long. We should be ready to learn new sets of technology and adopt the trending stacks out there. Some of us want comparatively out of the box, battery included approaches with rigid release cycles, maintaining tighter backward compatibility, etc.

If you think you belong more to this group, then you must choose Django. However, it is incredible to walk along with new features and flexibility of the Flask framework too. When you want to maintain consistency between the front end and backend you can choose a full-stack framework such as NodeJS.

Going with a framework is more of a choice that depends on the context and problems that we try to solve. Selecting a framework is always tough. We hope that we have presented the essential review points in this tutorial, and it will help you in finalizing one framework. However, we recommend learning both frameworks.

It is easier to start with Flask and then move on to Django after gaining some experience in Web Development. If for some reason your development efforts require the use of JavaScript then you can go ahead with NodeJS.