This YAML Tutorial Explains What is YAML, Basic Concepts of YAML such as data types, YAML Validator, Parser, Editor, Files, etc with the help of Code Examples using Python:

Furthermore, programmers use markup languages as common, and standard data interchange formats between different systems. Some examples of markup languages include HTML, XML, XHTML, and JSON.

We have shared information on one more markup language in this easy to follow YAML Tutorial. 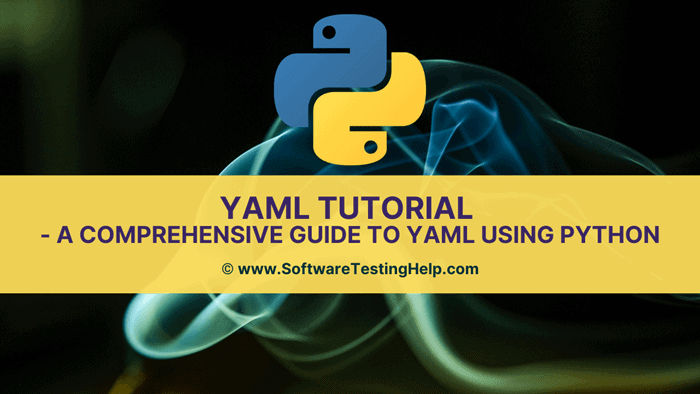 This tutorial helps the readers in finding answers to the below-mentioned questions. Learners can take the first steps and understand the mystery of markup languages in general and YAML in particular.

This guide is useful for experienced readers also as we discuss concepts in the context of programming in general, and also in the context of software testing. We will also cover topics such as Serialisation and Deserialization here.

Creators of YAML initially named it as “Yet Another Markup language.” However, with time the acronym changed to “YAML Ain’t a MarkUp language.” YAML is an acronym that refers to itself and is called a recursive acronym.

We can make use of this language to store data and configuration in a human-readable format. YAML is an elementary language to learn. Its constructs are easy to understand too.

Clark, Ingy, and Oren created YAML to address the complexities of understanding other markup languages, which are difficult to understand, and the learning curve is also steeper than learning YAML.

To make learning more comfortable, as always, we make use of a sample project. We host this project on Github with MIT license for anyone to make modifications and submit a pull request if required.

You can clone the project using the command below.

However, if required, you can download the zip file for the code and the examples.

Alternatively, readers can clone this project with the help of IntelliJ IDEA. Please complete the section on prerequisites to install Python and configure it with IntelliJ IDEA before cloning the project.

Why Do We Need Markup Languages

It is impossible to write everything in software code. It is because we need to maintain code from time to time, and we need to abstract the specifics to external files or databases.

It is a best practice to reduce the code to as minimum as possible and create it in a manner that it doesn’t need modification for various data inputs that it takes.

For example, we can write a function to take input data from an external file and print its content line by line rather than writing the code and data together in a single file.

Markup languages make it easier for us to store hierarchical information in a more accessible and lighter format. These files can be exchanged between programs over the internet without consuming much bandwidth and support the most common protocols.

These languages follow a universal standard and support various encodings to support characters almost from all spoken languages in the world.

The best thing about markup languages is that their general use is not associated with any system command, and this characteristic makes them safer and is the reason for their widespread and worldwide adoption. Therefore, you might not find any YAML Commands that we can directly run to create any output.

Benefits Of Using A YAML File

YAML has many benefits. The below-given table shows a comparison between YAML and JSON. JSON stands for JavaScript Object Notation, and we use it as a data-interchange format.

Due to the benefits of YAML over the other file formats such as JSON, YAML is more prevalent among developers for its versatility and flexibility.

We first install Python and then configure Python and its packages with IntelliJ IDEA. Therefore, please install IntelliJ IDEA if not already installed before proceeding.

Follow these steps to install and setup Python on Windows 10.

Download Python and install it by selecting the setup as shown in the below image.

Start the setup and select customize the installation. Select the checkbox of Adding Python to PATH.

Customize the location of Python as displayed in the image.

Let’s now configure IntelliJ IDEA with Python. The first step is to install the Plugins to be able to work on Python projects.

Use the File Menu and Go to Platform settings. Click on the Add SDK button.

Select the Virtual environment option and select Python’s base interpreter as the one that was installed in the previous step.

Now select the virtual environment created in the previous step under the Project SDK Settings.

We recommend one virtual environment for one project.

Open the config.py file from the project explorer and click on install requirements, as shown in the below image.

Ignore the ipython requirement if required by unchecking an option in the Choose package dialog.

Now, you can head over to the next section to learn the basics of YAML.

In this section, we mention the basics of YAML with the help of an example file called config.yml and config.py. We firmly believe that explaining the concepts of YAML in parallel with its use in a Programming language makes learning better.

Therefore, while explaining the basics in YAML, we also involve the use of Python to read and write the data stored in YAML.

Now let’s Create or open the config.yml in our respective editors and understand the YAML.

Notice that YAML files have .yml extension. The language is case sensitive. We use spaces and not tabs for indentation.

Along with these basics, let’s understand the Data Types. In the YAML mentioned, we have represented the information on a quiz. A quiz is depicted as a root level node, having attributes such as a description, questions, and answers.

YAML can store Scalars, Sequences, and Mappings. We have displayed how to write all necessary data types in the file config.yml.

Look at the various data types and mapped values in the below table.

Enlisted below are some of the worth noting additional elements of a YAML file.

Now notice the three dashes —. It signifies the start of a document. We store the first document with a quiz as the root element, and description, questions & answers as child elements with their associated values.

Python’s YAML package helps us in reading the YAML file and store it internally as a dictionary. Python stores dictionary keys as strings, and auto converts values to Python data types unless explicitly stated using “!!”.

The Python YAML package has a built-in YAML Parser, that parses the file before storing it in memory.

Now let’s create and open config.py in our respective editors with the below content.

To test that you have completed the outlined steps mentioned above, run config.py.

Open the config.py file in IntelliJ IDEA, locate the main block and run the file using the play icon.

Once we run the file, we see the console with the output.

In read_yaml function, we open the config.yml file and use the safe_load method of the YAML package to read the stream as a Python dictionary and then return this dictionary using the return keyword.

my_config variable stores the content of the config.yml file as a dictionary. Using Python’s pretty print package called pprint, we print the dictionary to the console.

Notice the above output. All the YAML tags correspond to Python’s data types so that the program can further use those values. This process of constructing Python objects from the text input is called Deserialisation.

Open config.py and add the following lines of code just below the read_yaml method and above the main block of the file.

In the write_yaml method, we open a file called toyaml.yml in write mode and use the YAML packages’ dump method to write the YAML document to the file.

Now add the below lines of code at the end of the file config.py

Save the config.py and run the file using the below command or using the play icon in the IDE.

We see that the above command prints the contents of config.yml to the console or system’s output. Python program writes the same content to another file called toyaml.yml. The process of writing the Python object to an external file is called Serialisation.

YAML is quite versatile, and we can store multiple documents in a single YAML file.

Create a copy of the file config.yml as configs.yml and paste the below lines at the end of the file.

Three dashes — in the above snippet marks the beginning of a new document in the same file. Use of | after the description tag enables us to write a multi-line text of type string. Here in the new document, we have stored questions, and answers as separate mappings nested under questions.

Now create a new file called configs.py and paste the below-mentioned code into the file.

The output of the above command is displayed below.

The output is similar to the previously mentioned single document output. Python converts every document in the configs.yml into a Python dictionary. It makes it easier for further processing and use of the values.

You may come across the below questions while working with YAML.

Q #1) Is it possible to preserve the Order of YAML Mappings?

Answer: Yes, it is possible to customize the default behavior of the loaders in Python’s pyYAML package. It involves the use of OrderedDicts and overriding the Base resolver with custom methods, as shown here.

Answer: You can base64 encode an image and keep it in YAML, as shown below.

Answer: Both > and | allow writing values in multiple lines in YAML. We use greater than symbol > to write multi-line strings and | to represent literal values. Values written using | need not be escaped. For example, we can store Html by using |.

Q #4) What is the significance of … at the end of the YAML file.

Answer: Three periods … are optional identifiers. These can be used to mark the end of the document in a stream.

Q #5) How to write comments in the YAML file?

Answer: We use # to write a single line comment. YAML doesn’t support multi-line comments. Thus, we need to use # in multiple lines, as shown below.

In this guide, we covered the steps of preparing the development environment in both Windows as well as Linux to get started with YAML. We nearly discussed all the concepts of YAML’s basic data types, YAML editor, and YAML Parser.

We have also highlighted the benefits of using YAML vis-a-vis other markup languages and provided code examples with the help of a supporting sample project. We hope that now the learners can use YAML to abstract data from application logic to write efficient and maintainable code.