Review of the latest Augmented Reality Apps being used in the day-to-day operation, their types, desirable characteristics, and platforms to build the best AR Apps:

Augmented reality is breaking ground in health, education, marketing, business sectors, as well as in government and non-government sectors alike, beyond its default application in the gaming and entertainment industries.

This tutorial looks at and compares the features of apps that use augmented reality to facilitate daily operations. 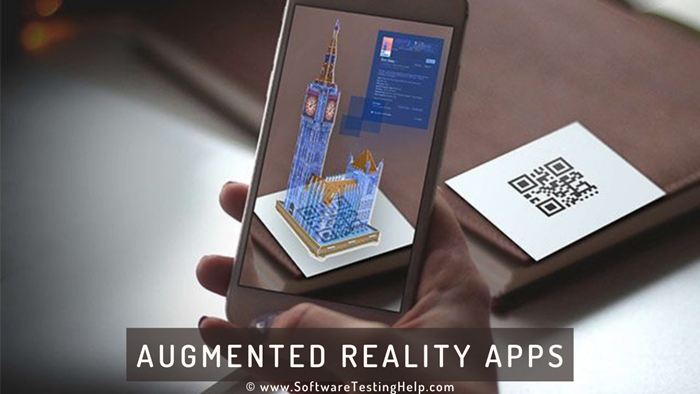 We will consider the top 10 augmented reality apps covering different industrial sectors where they are applied in day-to-day lives. The most moving applications include health care, education, marketing, remote working, business, general enterprise, and gaming.

The below image shows the ARKit downloads share of categories after 6 months of its launching: 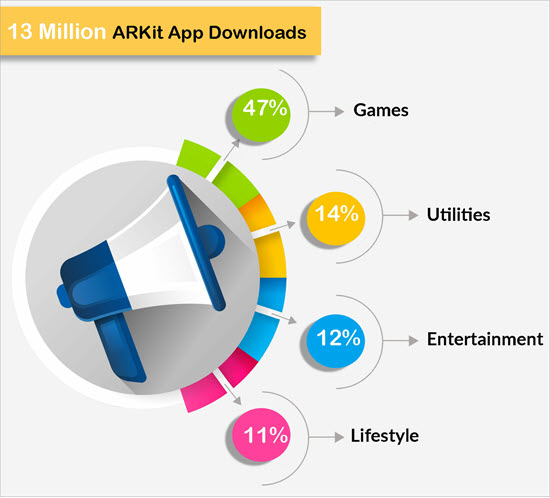 These use image recognition technology where they rely on black and white markers to overlay and display AR content over the user’s real-life environments.

The below image is an example of a Marker-based AR app on a smartphone:

They work without markers and use GPS, accelerometer, or digital compass to detect the location/position of the user and then overlay digital data on real physical places. They contain additional features, allowing them to send the user notification about newly available AR content based on their location.

For example, the best markets around. In the below image, a Location-based AR app provides suggestions on nearby facilities on a user’s mobile phone:

This is a location-based and tech-based app that works based on technologies such as Wi-Fi, Bluetooth, Ultra-Wideband UWB, and other Radio-Frequency Identification (RFID). These platforms are used in fleet traction, navigation, inventory and asset tracking, personnel tracking, network security, and other kinds of applications.

Enlisted below are the top characteristics that are to be considered when selecting/building AR Apps:

The app can detect and understand the spaces around the user to customize them, including recognizing 3D objects such as boxes, cups, cylinders, and toys, etc. It can recognize airports, bus stations, shopping malls, etc.

This is for location-based and location-sensitive AR apps to enable them to detect and identify real-world locations of the user.

This ability allows any apps to use augmented reality to map the environment where an object or user is located and to track all their movements. The app can remember the physical position of objects, place virtual objects relating to respect to the positions, and track all movements of the real-world objects.

This technology enables people to use the app in-doors, as GPS is available for outdoor use.

You get to decide whether your data will be stored locally on the user’s device or cloud or both. Cloud data storage is mainly beneficial for apps requiring many markers due to storage limitations. Some development kits support thousands, while others only hundreds of markers.

No matter what apps use augmented reality, support on multiple platforms including Windows, iOS, Android, Linux, and others is important.

A must-have app that will identify images, objects, and places. Some technologies used include machine vision, artificial intelligence, and camera technologies. The tracked images are over-laid with animations.

#7) Interoperability with other development kits

Some development kits such as ARCore integrate with or support traditional design tools such as Unity and OpenSceneGraph kits to extend the functionality of apps.

List Of Top Augmented Reality Apps For Android And iOS

Here is the list of popular AR Apps being used:

The below image describes how the IKEA Place app is being used to test furniture virtually on a customer’s home. 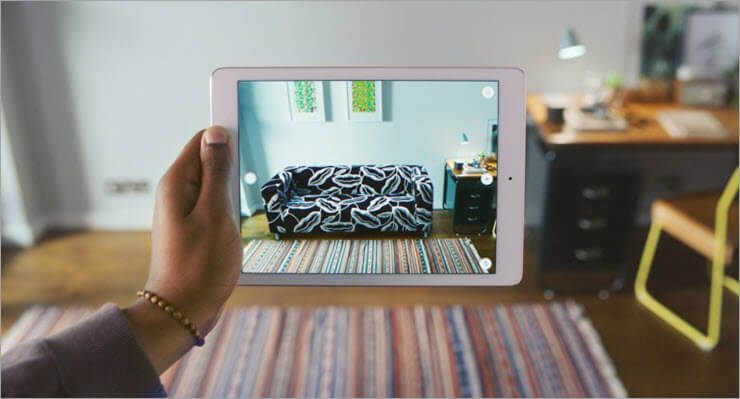 This home deco augmented reality app for Android and iOS lets you place virtual versions of home décor products on your home floors, spaces, and walls to test them and see which fits best – in size, shape, and design before you can buy or order at IKEA store.

Other among top/best-augmented reality apps for Android in this category include Houzz for iOS and Android, which also allows you to plan for and test furniture and home improvement products before buying on the Houzz store; Amikasa, which lets you style and try new layouts of your room before buying furniture or other items for kitchen, living room, or the kitchen.

In the below image, the Scope AR app is being used for remote maintenance. 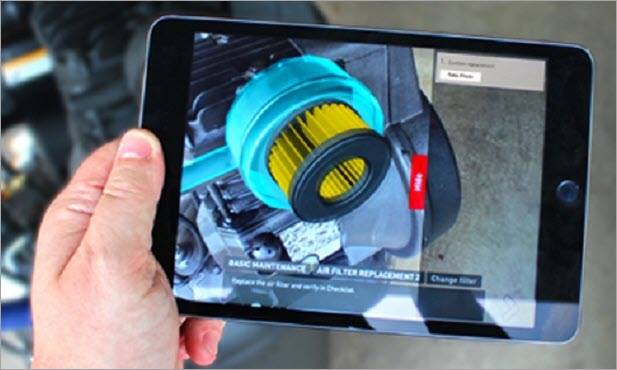 ScopeAR’s Remote AR app allows maintenance staff or any other worker/person at the factory floors to receive AR-based video image instructions, text-based and other annotations, chat, and general instruction from an expert, remotely, without requiring the experts to travel and do the maintenance themselves. It was demoed in CES 2014 and launched in 2015. 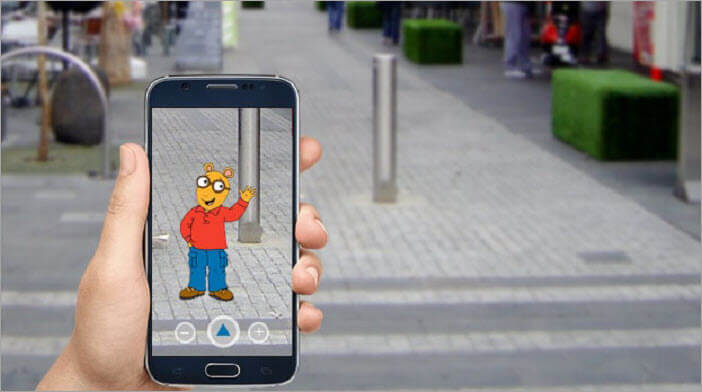 By simple definition, this Android and iOS app allows users to capture using the camera or upload 3D versions of any product and display them in a virtual environment.

Pricing: Starting at $10 per month for corporates. 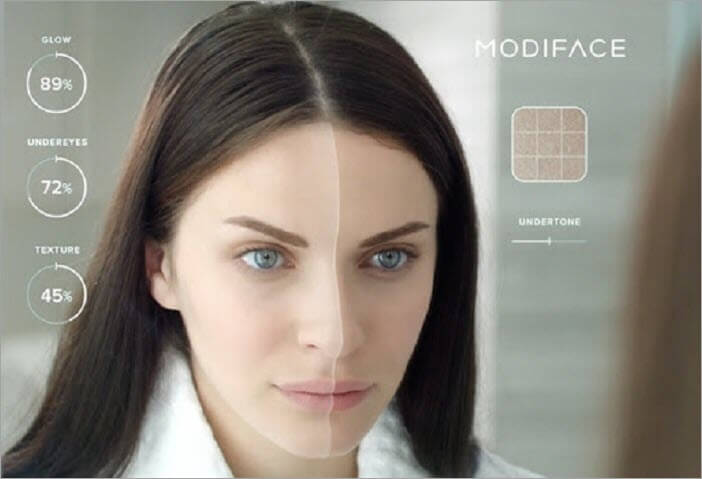 ModiFace is an app on which you can use the smartphone to scan your face, then virtually, in real-time, apply the beauty product you target on your face as if you are wearing it. With ModiFace, you can simulate how do your makeup, hair and skin product, and other kinds of beauty products will look on you.

Other beauty apps using AR include YouCam, FaceCake, ShadeScout, the Ink Hunter for Android and iOS, which lets you try out tattoos including different designs, custom designs, different orientations, and where to place the tattoos on your body.

Pokemon Go is an Android and iOS AR app that allows you to mark your real-world location using your phone’s GPS and move your in-game avatar as your phone camera shows Pokemon in the real world. It can take photos next to Pokemon or capture or collect the Pokemons by throwing balls at them.

Aside from Pokemons, the Knightfall AR Android and iOS app that places you as the game character on a battlefield called Knights Templar to defend Acre from enemy warriors. You get gold for killing enemies by shooting at them as they advance to your walls.

The Ingress Prime is a sci-fi-based AR multiplayer game for Android and iOS, on which players fight to control virtual territories against other groups of players. Other AR games are Zombies GO and Genesis AR.

The below image depicts the application of augmented reality in medical training. 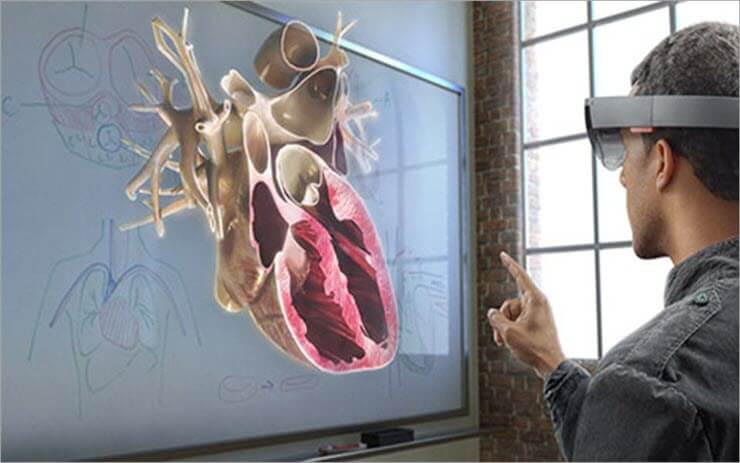 Pricing: Not made public. Pricing depends on the use case as per the company website. 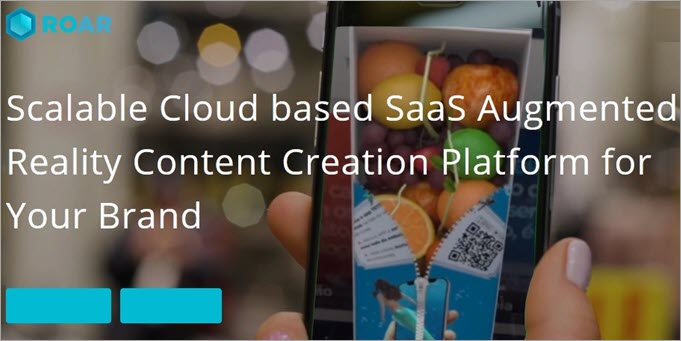 Roar AR content management platform allows you to build and publish any AR experiences for your customers, students, or friends in a matter of minutes, by overlaying the real-world with virtual objects including sound, video, animations, models, games, etc. You can publish on the web, iOS, or Android platforms.

Pricing: $49 for those creating and hosting AR. 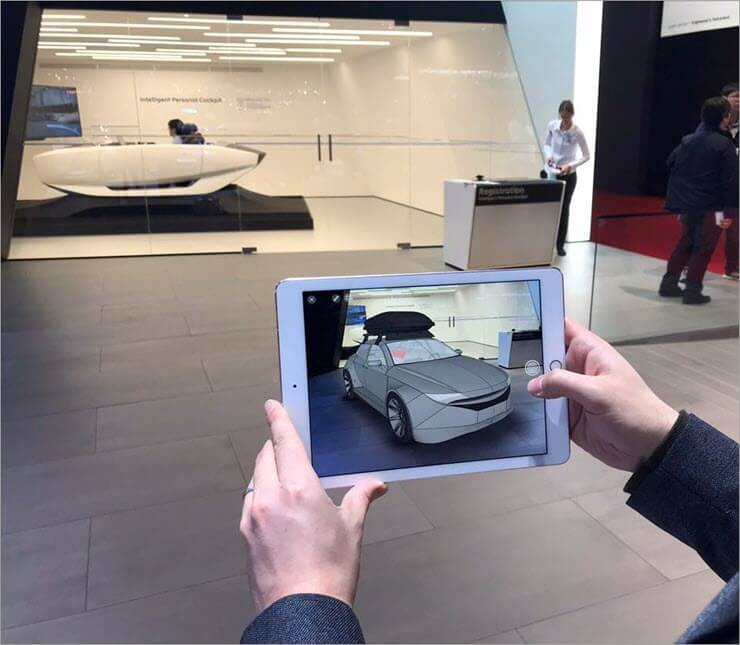 uMake is one of the best AR design tools or apps because it allows you to not only build product models using available objects but to also draw or sketch with a pencil.

Pricing: Starting from $16 per month.

Other apps include video editor Waazy that allows you to add AR effects to your video, and painters such as Lightspace, World Brush, and Super paint. AR Ruler Android app lets you measure real distances, volumes, angles, and areas between real-world objects and to display the measurements. You can also choose to create room plans using these measurements.

If you are more into sketching projects, you could check SketchAR. 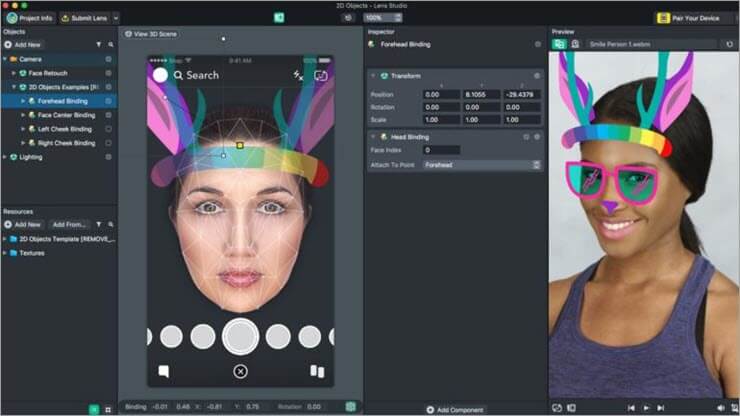 The Lens Studio is a Windows AR studio platform for those who want to create AR experiences for Snapchat, for whatever reason – entertainment, business, or organizational needs. 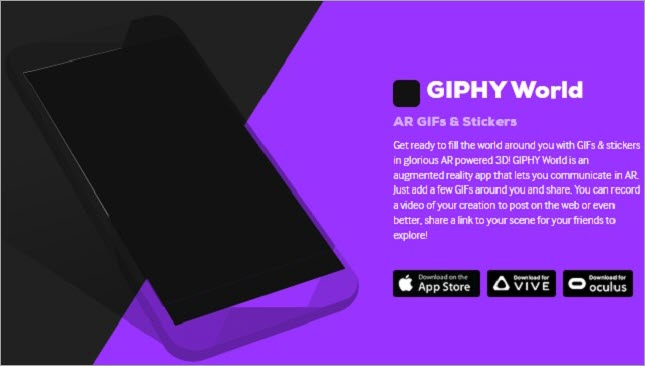 Giphy AR app allows you to take photos and videos of real-world scenes using your device camera, and to edit them by overlaying GIFs and stickers.

Besides creating and editing, the tool allows its users to share these on social media and email or phone.

Enlisted below are the top 7 platforms for making the best AR apps – AR App Developer Tools.

=> Hand-on Video: How to create an Augmented Reality App

The top reasons you might want to come up with an app are business, purposes of branding, or for your customers, for the audience when marketing your products, for students in a learning environment, for entertainment, and many others.

Most of these platforms will help you to make AR apps for smartphones.

Pricing: There is a free version. Price ranges from $99 per month to $499 for a one time license.

ARKit is a choice platform when developing augmented reality apps for iOS and other Apple devices.

ARCore is a choice platform for Android AR app development and is one of the top platforms for developing the best android apps for Android.

Pricing: There is a free version, but the Pro versions cost between $499 and $599 per year.

How To Play AR Apps

In this section, we will see how to play AR apps on Smartphones, AR Emulators, and AR Headsets.

To install and play augmented reality apps for Android built on the ARCore platform, the smartphone must support ARCore or be AR capable.

You must be able to install the ARCore app from Google Play Store (now known as Google Play Services for AR) and have iOS 11.0 and above for Apple devices that support iOS ARKit.

ARCore app works for Android 7 or Android 8 (for some devices) and above, otherwise, those that support AR these days come with the apps pre-installed as part of factory apps. So you should be able to check if your phone accepts these apps if it doesn’t chances are it isn’t AR capable.

Second, the phone must have shipped with Google Play Store installed. The other thing you need is an Internet connection.

>> Click here to see the list of different smartphone models and model numbers that support the AR-based ARCore platform.

The below image shows some extended controls on an emulator software. 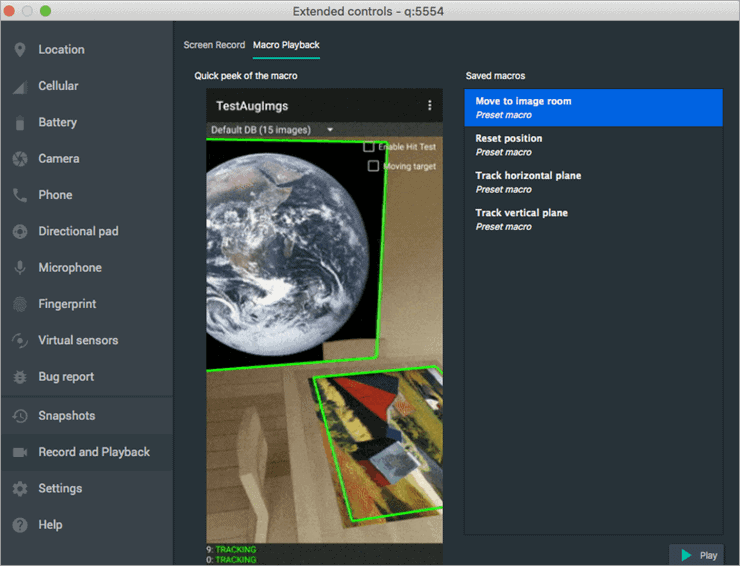 Android emulators on PC include BlueStacks and NoxPlayer, but there is the Android Studio and Android Emulator. They should be your to-go apps if you want augmented reality apps for Android by using them to first emulating any Android.

#3) AR emulators for iOS and other platforms

#4) How to use AR apps with AR headsets

Most AR headsets use gaze, gestures, and other methods to allow you to install, uninstall, and select apps from their stores to play them.

Microsoft HoloLens 2 being used for AR in the image below. 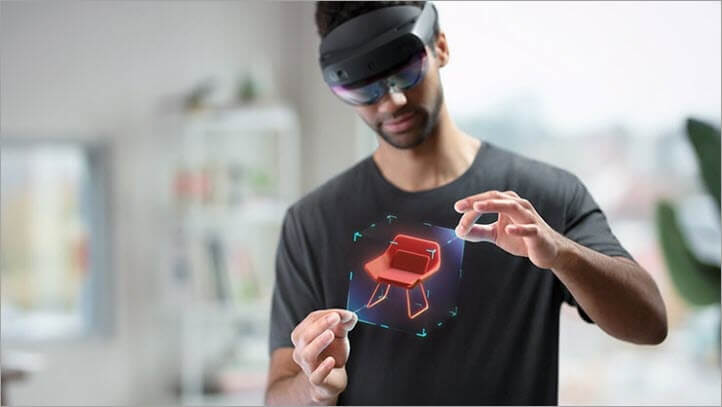 This tutorial discusses the top augmented reality apps for different platforms, how to play AR apps on iOS, Android, and emulators, and how to play these apps on AR headsets such as HoloLens.

We explored the apps that use augmented reality and found that the best AR apps are those with real-world applications in health, gaming, education, training, and others. Also, the best AR-on-the-go is on apps based on smartphones and portable AR headsets.