This Tutorial will Explain how to Automate a Native App on an Android Device. You will also Learn to Interact with Elements using UIAutomator Viewer:

To automate a native application on Android device, please follow the steps listed below: 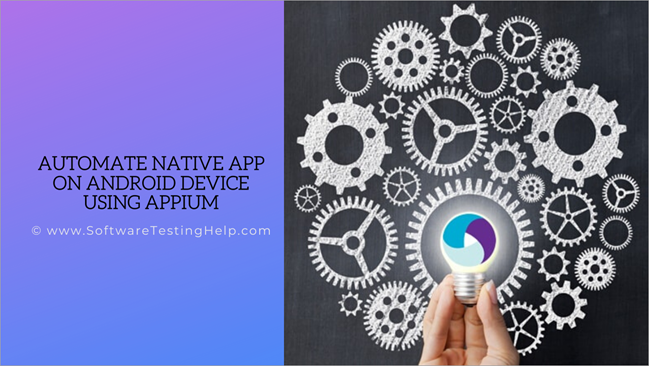 Here are the Video Tutorials:

Steps To Automate A Native App

#1) Connect The Mobile Device Or Create An Emulator

(Note: In order to create an emulator of a device, you can use AVD manager from Android SDK bundle or GenyMotion software)

#2) Get Details Of Mobile Device 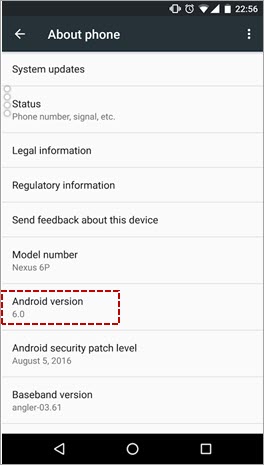 #3) Get Details Of App To Be Launched

There are two ways to install the application

To install the application from the system command line,

While running the adb command, wait for the application to get installed. You will get a Success message and also the application will appear on the device listed, as shown in the screenshot.

Once the application is installed, get the below details :

Application details like Package name and Application activity name, as these would be used by Appium to identify the application.

appActivity refers to the different functionalities that are performed by the app.

For Example, WhatsApp provides multiple functionalities such as conversations, video calls, profile information, setting profile photos, changing status, setting notifications, etc. All these functionalities are performed by different appActivity. Together with these activities, every application has a main activity which is the main screen you see when you launch the app.

So, when you launch the app with Appium, it needs to know which activity has to be launched. And you would need to provide the main activity name.

To get the Application Package name and Activity name:

appPackage starts with com. and ends before backslash (/). So from the above example, appPackage name is – com.google.android.youtube

appActivity starts after the backslash (/) and goes till the end. From the above example, the appActivity name is – com.google.android.apps.youtube.app.WatchWhileActivity

Note down the Package name and Activity name of the application. 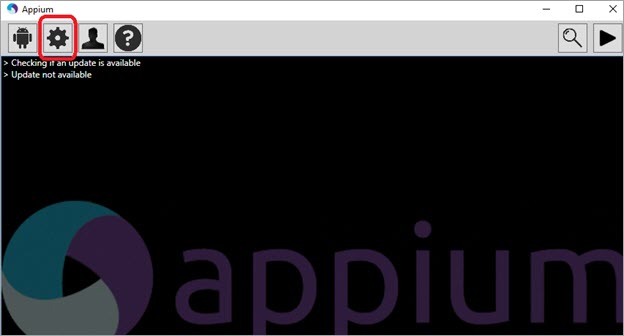 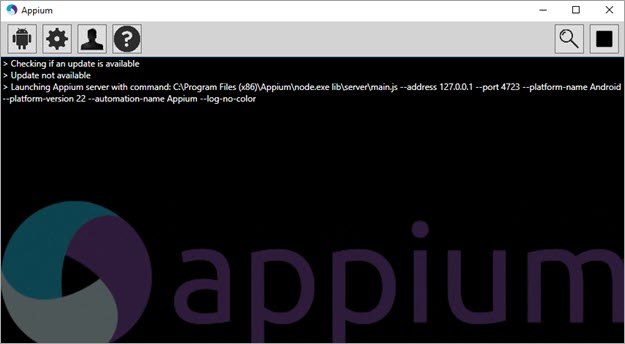 Desired Capabilities, Properties of Device, Application, and Browser are defined.

An object of RemoteWebDriver is initiated since automation is to be run on a remote device, not on the local computer.

URL of the Appium Server is passed along with the device and application details.

At runtime, the driver is initiated and Appium is connected using the Server address (http://127.0.0.1:4723/wd/hub). Also, all other device details are read from capabilities(cap) with which Appium will create a session for automation. 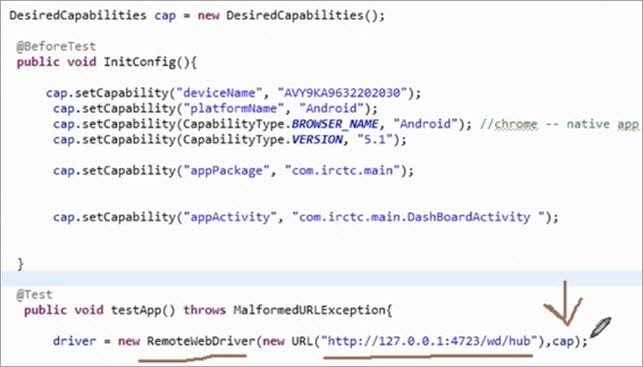 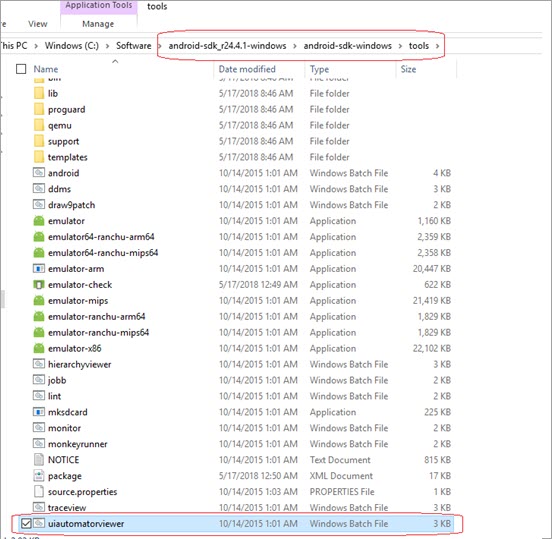 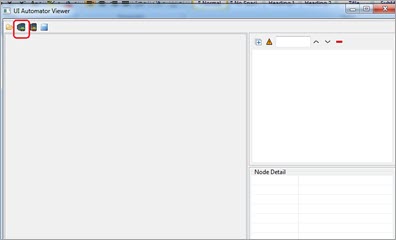 a) You will find the screenshot of the mobile device in the left pane, and the right pane will hold the node structure and properties of each element/node. 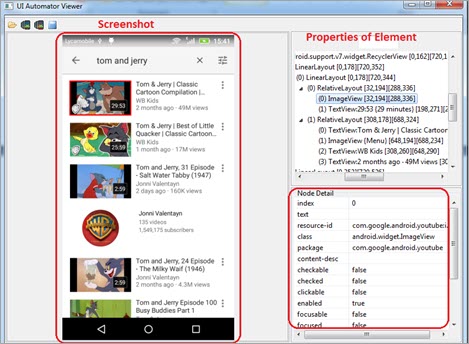 b) As and when you hover on each element in the screenshot, its attributes get listed in the right pane with its corresponding value. With this information, each element can be identified either by using Id, ClassName, Xpath, etc. 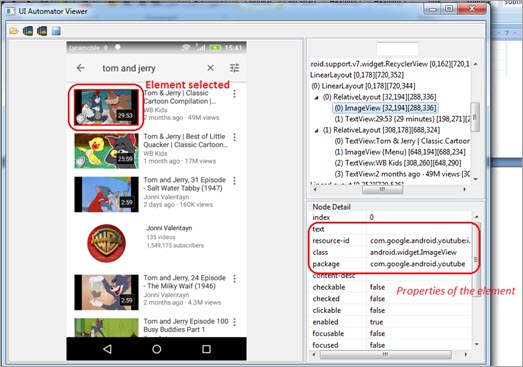 c) Once an element is identified using any of the identification criteria, it can be used in the automation script to perform actions.

In this way, elements can be recognized and interacted for automation.

See an example of inspecting an element as highlighted below: 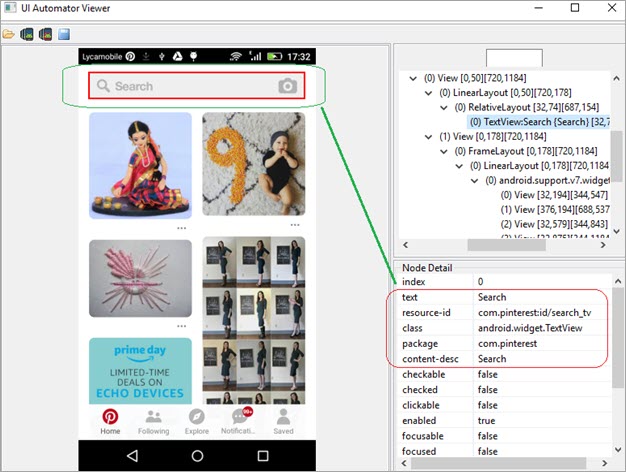 Along with the above attributes, we can write xPaths for object identification.

There are three ways of creating an Xpath for identifying an element in the Native app.

We can also use a combination of one or more attributes along with the class name as :

Here Class name is android.widget.TextView. So we can create XPath value with class name as below.

We can create XPath with attribute values alone. Here, we selected two attributes, say resource-id and text, then XPath is created as below.

Where * – represents an element in any node/class.

#7) Run The Script And Automate The App 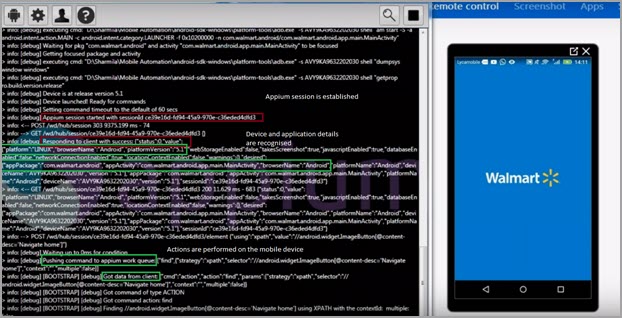 We have seen all the steps required to automate a native app on an Android device i.e on a real-time mobile device and also learned to locate an element in a native application.

In the next chapter, we will focus on automating a Web application on Android Chrome Browser.