Learn and understand what is Pilot Testing and explore its objective, steps to perform, comparison, etc. through this tutorial:

Pilot testing is a type of Software testing which is performed by a group of end-users prior to the deployment of the software in production.

The best practice followed is to test the component continuously so that areas that are more prone to bugs are identified and reported back to developers for the fixes to be done in the next released build.

Group of end-users who verifies the system, provide the bug list to the developers to be fixed in the next release. It lets the users find the bugs before it goes into production. This testing type is a replica of a real environment or verification before the system actually goes live.

What Is Pilot Testing

Pilot Testing comes in between the User Acceptance test and Production deployment. The purpose of performing this testing is to define the project’s cost, risks, feasibility, time, and efficiency. 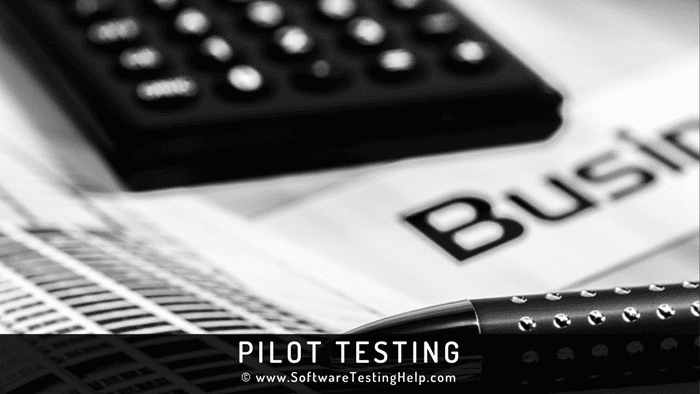 Why Pilot-Testing Is Important

Pilot test is very important as it helps in:

Example: Microsoft, Google, HP are a few to name and provide examples of this testing.

Consider an organization having several departments, and there is a common application that is being used by all of them. The new application to be launched is deployed in any one of the departments first and once it is evaluated, based on that the next step is taken i.e. if it’s a success, it can be deployed to other departments as well, or else it will be rolled back. 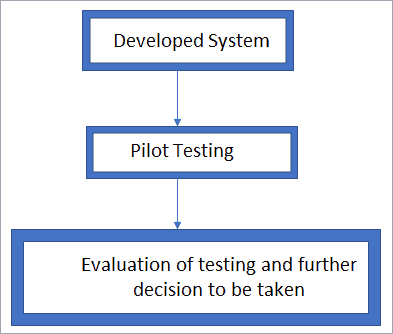 Software development companies follow the approach of storing site files on live servers or directories on the Internet to perform testing. 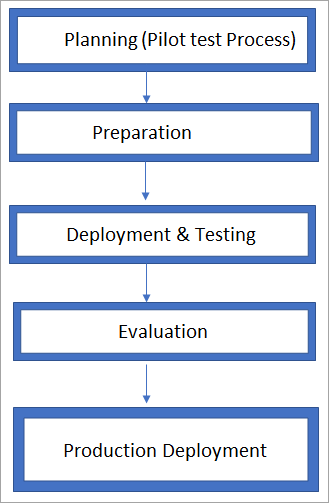 #1) Planning: The initial step in this particular testing is to plan for the test processes to be followed. The plan is created and approved for the same as the plan will be followed further and all the activities will be derived from this plan only.

#2) Preparation: Once the plan is finalized, the next step is the preparation for this type of testing i.e., software to be installed in the customer area, selection of the team for performing the tests, data required for testing to be collated. Before the testing starts, all the testing environment has to be in place.

#3) Deployment: After the preparation is done, deployment of the software is done at the customer premises. Testing is performed by the selected group of end-users who actually test like the targeted audience for the product.

#4) Evaluation: Once the deployment is completed, testing is being performed and evaluation is done by the group of end-users, who conclude the status of the software. They create a report and send the bugs to be fixed across the developers to fix in the next build. Based on their evaluation, further deployment in production is to be done or not, is being decided.

#5) Production Deployment: Production deployment is only done if the end user’s evaluation results come out as the developed software is the same as expected, i.e., it meets the customer requirement.

Points to be considered in Pilot Testing:

For performing this test, few points need to be considered and taken care of. These are mentioned below:

#1) Testing Environment: Set up of proper testing environment plays a vital role as without the same testing cannot be performed. This testing requires a real-time environment that the end-user will actually face. Everything needs to be taken care of, including the hardware/software to be used and installed.

#2) Group of testers: To perform this type of testing, selecting the group of testers as a targeted audience is very important as testers have to represent the targeted users and if not selected correctly can lead to incorrect results. Proper training should be provided to the testers to have fruitful results.

#3) Proper Planning: For any successful project, planning is very important from the very beginning. Resources, timelines, hardware, and software required test scenarios, budget, deployment of servers: everything has to be well planned.

Evaluation criteria for the pilot test should be planned as the number of users who participated, number of satisfied/dissatisfied users, support requests and calls, etc.

#4) Documentation: All the required documents should be prepared and shared across the teams. The installation process should be documented properly before testing starts. Test scripts should be available for the software to be tested, along with the list of functions to be executed.

A list of issues/bugs should be shared with the developer/designers on a timely basis.

Steps After Evaluation Of Pilot Testing

Once the pilot test is completed, the next step is to finalize the next strategy for the project. The test outputs/results are analyzed and based on that next plan is chosen. 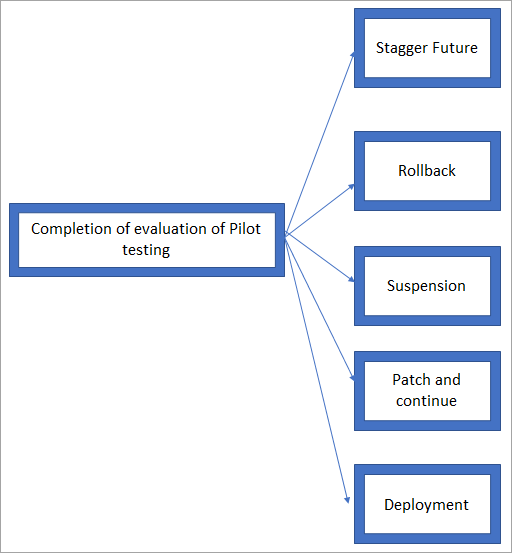 It has many advantages as listed below:

The below table enlists the difference between Pilot Testing and Beta Testing:

Q #1) What is the purpose of Pilot Testing?

Answer: The purpose of this particular test is to define the research project’s cost, risks, feasibility, time, and efficiency.

Answer: Pilot Test is one of the important steps and is necessary as it works in many areas like debugging applications, testing processes, product preparation for deployment. It saves the cost of the expensive bugs as they are found in this testing itself.

Q #3) What do you mean by Pilot Testing?

Answer: This particular testing method is a software testing type that is done between the UAT and the production phase. It is done to verify the readiness of the product to be launched or not. This testing is done on the component of the system or on the entire system. A group of end-users perform this testing and provide feedback to the developers.

Q #4) What are the benefits of Pilot Testing?

Answer: This test has many benefits:

Q #5) Is Pilot-Testing an essential part of all research projects?

Prior to starting the pilot test, there are few things that need to be taken care of such as documentation, selection of a group of users, planning, and appropriate test environment.

Depending on the results of the testing next strategy of the product can be decided whether to continue with fixes, suspending the testing, rollback to the previous configuration, or deploy the system in the production environment.