Many times, there are a number of data sets that we have to run the same tests on. And, to create a different test for each data set values is time-consuming and inefficient.

Data Driven Testing overcomes this issue by keeping the data external to Functional tests and loading them when there is a need to extend the automation tests.

In this tutorial, we will discuss Data Driven Testing – What it is, how it works, pros & cons, etc.

What Is Data-Driven Testing?

The setup and control of test environment in this process is not hard coded. 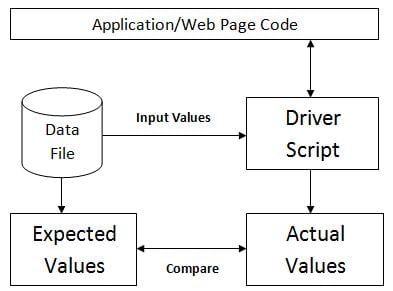 Data-Driven Scripts can be defined as those applications specific script (like JavaScript) coded and modified to accommodate variable datasets.

Some of the features of Data-Driven Scripts are:

Some features of Keyword Driven Test Automation are:

Let us see an example for Data Driven Testing. Consider the Login Page of a Flight Reservation website.

2) This file contains inputs given to the driver script and expected results shown in the table below;

3) The driver script for above data file will be,

4) Steps performed for above driver scripts are as follows;

5) Calculate the result using an operator on Value1 and value2

6) Finally, compare the expected result with the actual result

To create a Data Driven Frameworks in QTP, the following components are required:

These are 3 methods to create Data Driven Framework in QTP:

=> Learn more about Data Driven framework in QTP with examples

2) The framework includes navigation through a program, reading the data files and logging test status.

3) The framework should have the following features:

=> Read this article to learn more about Data Driven Framework in Selenium with examples.

1) TestNG is a framework that makes Data Driven automation Testing possible in Selenium.

4) It has some additional key features such as parameterization, parallel test execution etc and requires JDK 7 or higher

5) Some of the cool features of TestNG that makes it easier and efficient are:

It speeds up the decision-making process and in turn rapid automation testing. Quick navigation through data sets is also an important feature offered by Data Driven Testing reduces testing timelines for an AUT.

About Author: Sanjay Zalavadia – as the VP of Client Service for Zephyr, Sanjay brings over 15 years of leadership experience in IT and Technical Support Services. Throughout his career, he has successfully established and grown premier IT and Support Services teams across multiple geographies for both large and small companies.

Let us know if you have any queries about Data Driven testing strategy.