Read This Informative Article to Understand the Differences Between Manual Testing Vs Automation Testing Along with Scenarios Where Automation Can be Used:

Software Testing is the process that is carried out throughout software development. It is the process of checking, verifying and validating the requirements with the product. We are committed to providing quality products to the customers, hence we check the product functionality before its release.

Initially, testing was done manually, but in today’s world everyone needs an easy life and why not testers? With this thought, Automation testing came into the picture and things changed drastically.

This tutorial will show you how this evolution happened and where it will take us in the future.

What Is Manual Testing?

Manual Testing is the process of testing the software manually.

When we use human resources to perform testing then we can consider the testing as Manual. In other words, in this type, we execute test cases manually. The skills, knowledge, and experience of the testers play an important role in Manual Testing.

What Is Automation Testing?

Usage of automation tools for executing test cases is known as Automation Testing. It is a type of testing for which we need resources with the knowledge of scripting, etc.

Selenium, QTP, UFT are some examples of automation tools. Selenium comes with C#, JAVA, Pearl, PHP, Python, and Ruby. Hence having knowledge of any of these listed languages will work.

Manual Testing has some limitations. Many times we have to do repetitive testing and doing things repetitively can be boring. Testing with valid and invalid inputs can make you irate. To err is human and when it comes to quality we just can’t compromise.

Time constraint is the most important thing when we talk about the release of the software. If development teams fail to complete the development process before the deadline, then the company loses customers and no one can afford this.

For Example, it could be time-consuming to test software with negative inputs.

Cost is the major constraint for any software development process. Maintenance costs can be a major issue for undetected defects. Automation comes into the picture to conquer all the above issues.

Enlisted below are a few pointers that justify the reason for using Automation Testing:

Let’s see how both these testing types are different from each other. 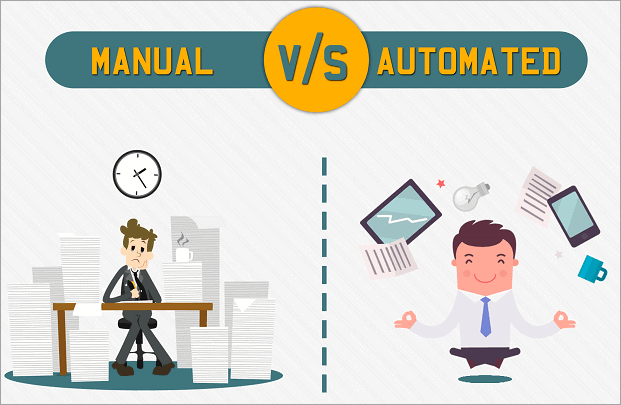 As there is a demand for Automation, it can be confusing to choose between Manual and Automation testing. Here, we have tried to clear this confusion. Automation also has some flaws, hence it is important to know them and then decide. We can’t automate each and every test case, in the next section, we have listed some scenarios which can help you select one over the other.

Scenarios Where We Can Consider Automation Testing

Next, let’s see the Testing Types that can be considered for Automation.

Scenarios Where We Should Not Think Of Automation

Now, let’s see the Testing Types which can not be considered for Automation.

Testing Types Where We Can Go With Either Manual Or Automation

Any machine or software is only capable of doing the things which were asked to do and this is the limitation (or sometimes advantage as it can not act smarter than us). Automation tools also have some limitations but eventually, they will evolve and will become smarter.

Both Manual and Automation Testing have pros and cons, and choosing between these two depends on the project requirements, time and most importantly budget. Finally, we can say that when we require skilled testers we can go with manual testing and where we need to automate the test case, we should choose Automation.

Which one do you prefer? Manual Testing or Automation Testing?