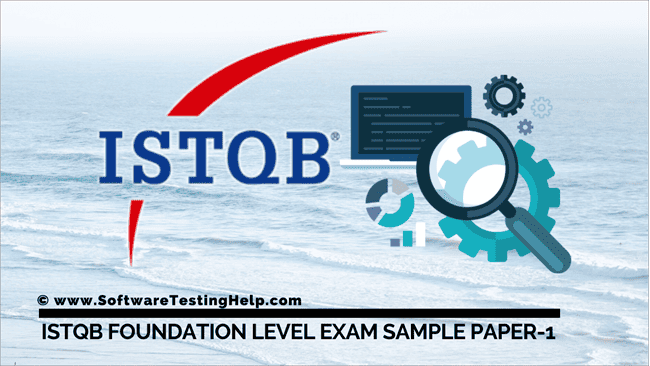 1    We split testing into distinct stages primarily because:
a)    Each test stage has a different purpose.
b)    It is easier to manage testing in stages.
c)    We can run different tests in different environments.
d)    The more stages we have, the better the testing.

2    Which of the following is likely to benefit most from the use of test tools providing test capture and replay facilities?
a)    Regression testing
b)    Integration testing
c)    System testing
d)    User acceptance testing

Now decide the minimum number of tests that are needed to ensure that all
the questions have been asked, all combinations have occurred and all
replies given.
a)    3
b)    4
c)    5
d)    6

6    Error guessing:
a)    supplements formal test design techniques.
b)    can only be used in component, integration and system testing.
c)    is only performed in user acceptance testing.
d)    is not repeatable and should not be used.

8    In prioritizing what to test, the most important objective is to:
a)    find as many faults as possible.
b)    test high risk areas.
c)    obtain good test coverage.
d)    test whatever is easiest to test.

10    Which one of the following statements about system testing is NOT true?
a)    System tests are often performed by independent teams.
b)    Functional testing is used more than structural testing.
c)    Faults found during system tests can be very expensive to fix.
d)    End-users should be involved in system tests.

12    Enough testing has been performed when:
a)    time runs out.
b)    the required level of confidence has been achieved.
c)    no more faults are found.
d)    the users won’t find any serious faults.

13    Which of the following is NOT true of incidents?
a)    Incident resolution is the responsibility of the author of the software under test.
b)    Incidents may be raised against user requirements.
c)    Incidents require investigation and/or correction.
d)    Incidents are raised when expected and actual results differ.

14    Which of the following is not described in a unit test standard?
a)    syntax testing
b)    equivalence partitioning
c)    stress testing
d)    modified condition/decision coverage

15    Which of the following is false?
a)    In a system two different failures may have different severities.
b)    A system is necessarily more reliable after debugging for the removal of a fault.
c)    A fault need not affect the reliability of a system.
d)    Undetected errors may lead to faults and eventually to incorrect behaviour.

17    How would you estimate the amount of re-testing likely to be required?
a)    Metrics from previous similar projects
b)    Discussions with the development team
c)    Time allocated for regression testing
d)    a & b

18    Which of the following is true of the V-model?
a)    It states that modules are tested against user requirements.
b)    It only models the testing phase.
c)    It specifies the test techniques to be used.
d)    It includes the verification of designs.

22    Which of the following is a form of functional testing?
a)    Boundary value analysis
b)    Usability testing
c)    Performance testing
d)    Security testing

24    Which of these activities provides the biggest potential cost saving from the use of CAST?
a)    Test management
b)    Test design
c)    Test execution
d)    Test planning

25    Which of the following is NOT a white box technique?
a)    Statement testing
b)    Path testing
c)    Data flow testing
d)    State transition testing

26    Data flow analysis studies:
a)    possible communications bottlenecks in a program.
b)    the rate of change of data values as a program executes.
c)    the use of data on paths through the code.
d)    the intrinsic complexity of the code.

29    Which of the following is the best source of Expected Outcomes for User Acceptance Test scripts?
a)    Actual results
b)    Program specification
c)    User requirements
d)    System specification

31    Which one of the following describes the major benefit of verification early in the life cycle?
a)    It allows the identification of changes in user requirements.
b)    It facilitates timely set up of the test environment.
c)    It reduces defect multiplication.
d)    It allows testers to become involved early in the project.

35    A failure is:
a)    found in the software; the result of an error.
b)    departure from specified behavior.
c)    an incorrect step, process or data definition in a computer program.
d)    a human action that produces an incorrect result.

37    The most important thing about early test design is that it:
a)    makes test preparation easier.
b)    means inspections are not required.
c)    can prevent fault multiplication.
d)    will find all faults.

40    A configuration management system would NOT normally provide:
a)    linkage of customer requirements to version numbers.
b)    facilities to compare test results with expected results.
c)    the precise differences in versions of software component source code.
d)    restricted access to the source code library.

Answers for above questions: