We explored all about Arrays and Single Dimensional Arrays in our previous tutorial.

In this tutorial, we will learn about Multi-Dimensional Arrays and Jagged Arrays in C# in detail along with examples. 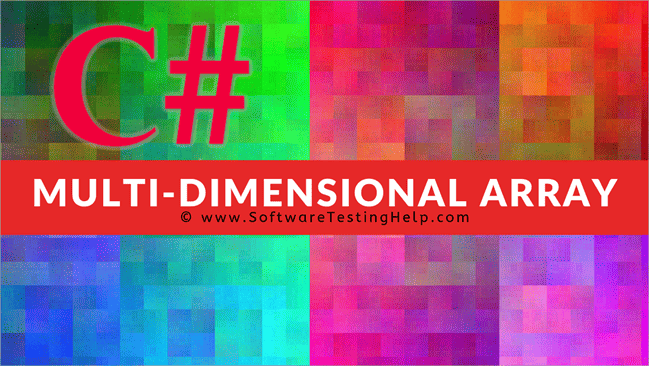 Unlike single-dimensional arrays where data is stored in a liner sequential manner, a multi-dimensional array stores data in tabular format i.e. in the form of rows and columns. This tabular arrangement of data is also known as a matrix. 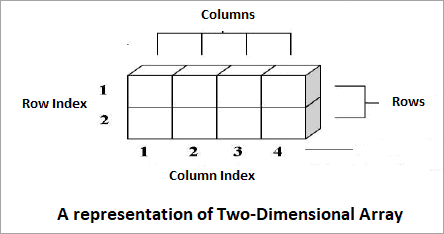 Multidimensional arrays are declared like the single-dimensional array with the only difference being the inclusion of comma inside the square bracket to represent rows, columns, etc.

Now, let’s have a look at an example to initialize a two-dimensional array.

A 2-D array is declared by

For Example, let’s say if my array element has “i” row and “j” column then we can access it by using the following index array[i, j].

The first part of the program is the Array declaration. We declared a string type array of row size 2 and column size 2. In the next part, we tried to access the array using for loop.

We have used a nested for loop for accessing the values. The outer for loop provides the row number i.e. it will start with the “zeroth” row and then move ahead. The inner for loop defines the column number. With each row number passed by the first for loop, the second for loop will assign a column number and access the data from the cell.

Another type of array that is available with C# is a Jagged Array. A jagged array can be defined as an array consisting of arrays. The jagged arrays are used to store arrays instead of other data types.

As discussed a jagged array can be initialized by the following syntax:

Hence, as shown in the above example, the jagged array can also be declared with values. To add values, we place a curly bracket after the declared jagged array with the list of values.

It is also possible to initialize the jagged array while declaring it.

This can be done by using the following approach.

In the above example, we defined a Jagged array with name “jaggedArray” with size 2 and then inside the curly bracket we defined and declared its constituent arrays.

Retrieve Data From A Jagged Array

Then we discussed in detail about Jagged array, which is an array of arrays.

A Jagged array is unique in itself as it stores arrays as values. Jagged arrays are quite similar to other arrays with the only difference being the type of value it stores.

=> FREE C# Training Tutorials For All