This Tutorial Explains Some of the Important Concepts in C# Programming Such as Constructor, Destructors, Static Class, Structs And Enums:

In one of our previous tutorials on Objects and Classes, we learned what a class and an object are.

An object is similar to a real-world object and a class is a logical collection of similar kinds of objects. It is one of the most fundamental types present in C#. In this tutorial, we will dive deep into the other related C# concepts. 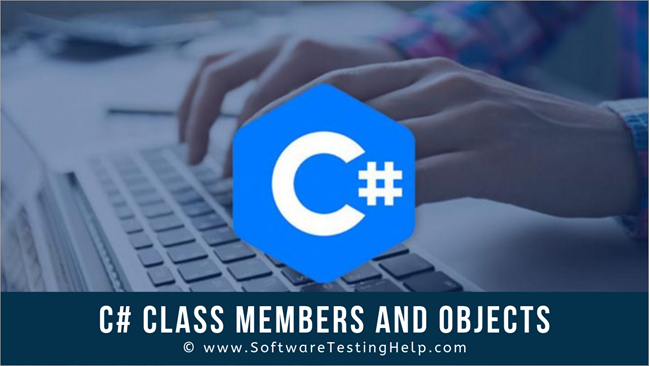 In this tutorial, we will be learning about some important aspects of classes and how can we use them in our programs. We will try to create simple C# programs based on the concepts that we learned in our previous tutorials.

What Is A Constructor In C#?

The constructor is a special type of method in C# programming language that is called or invoked automatically when an object of the given class is created.

Its main function is to initialize the data members of the newly created object. One of the most distinctive features of the constructor is its name. It has the same name as the class.

The constructors are basically of two types:

As the name suggests the default constructor is the basic constructor of a class. It does not have any argument and is directly invoked at the time of object creation.

Constructor has been invoked

In our previous example with the default constructor, we have our main method in the same class. In this example, we are having the main method in a different class.

As explained earlier, when a class is initialized, its constructors are called automatically. Thus, in this case, our constructor method “Details” have been invoked and when we passed the parameter during initialization, it prints the output.

Destructors are just the opposite of constructors. It is a special method of the class that is invoked when a class object goes out of scope. Similar to a constructor, a destructor name is also exactly the same as that of the class name but with a prefix of “ ~ ” (tilde).

Destructor neither accepts any parameter not does it return any value. Destructor destructs the class objects, hence it is mainly used to release memory after the program is executed. Another important thing to note about destructor is that it can neither be overloaded nor it can be inherited.

When the execution has been completed and the class object goes out of scope, the program moves towards destructor. The destructor is then invoked, which in turn destructs the object. Here, we have printed a message inside the destructor, that gets printed to console after the destructor is invoked.

Static Members In A Class

The members of the class can be declared static using the static keyword. When an object is declared as static, irrespective of the number of objects created there will be only one copy of the static object.

Being static implies that there will be a single instance of the member that will exist for a given class. It means that the value of the static function or variables inside the class can be invoked without creating an object for them.

Static variables are used for declaring constants as their values can be obtained directly by invoking the class rather than creating an instance of it.

In the above example, we have created a class “Details” that contains a static method “stat”. We have another class “Program” that contains the main method. In our previous topics, we saw, how we can initialize a class to access methods. But as we discussed, the static members of the class can be accessed with class object initialization.

Thus, in the main method, we have just invoked the method using the class directly without creating any object. The output of the program executed the code written inside the static method. In this case, we have printed a message to the console.

Thus, when we directly invoke the multiply method using the class name and by providing parameters, it executes the code and prints the output.

Value type entity in the C# is called structure. It helps the user to store related data of several different data types in a single variable. As stated a structure is a value type entity that holds fields, methods, constructors, operators, events, etc. A structure is declared by using the “struct” keyword.

Difference Between Struct And Class

Struct and Class may feel similar to each other in some way, but they have several differences.

A structure can be defined by using the struct keyword. A struct can define a new data type with several different members for the program.

A struct can be initialized in a way similar to that of an object initialization i.e. by using the new keyword. As a struct is a value type entity it is faster to operate than a class object. Wherever there is a need to store data, we need to use a struct. On the other hand, if you need to transfer data then it is advisable to use class than a struct.

In the above example, we defined a struct cuboid inside which we stored data types for length, width, and height of the cuboid. We have another class program where we have our main method.

In the main method, we initialize the “Cuboid” struct by using the new keyword. Then we used the object to call and assign values to the data types stored in the struct. Then we performed an operation on the variables from the struct and printed the result on the console.

So, if you want to use any property, events or methods, the struct must be initialized using the new keyword or else it will give you a compilation error.

Enum is a set of integer constants and similar to a struct it is also a value type entity. It is mainly used to declare a list of integers by using the “enum” keyword inside a namespace, class or even struct. In enum, we provide a name to each of the integer constants, so that we can refer them using their respective names.

Enum can have a fixed number of constants. It helps in improving safety and can also be traversed.

The syntax for declaring enum is given below.

All the enum constants have default values. The value starts at 0 and moves its way up one by one.

We worked with a similar example that we learned during struct. In this example, we have created an enum named Cuboid. This enum contains three members i.e. length, width, and height.

We have another class Program inside which we have our main method. An explicit cast has been used to convert enum type variables into integer type, then we have stored their values in different variables inside the main method and printed them to console.

By default, the value of the first enum will be zero, the second one will have 1 and so on. Hence, when we printed the values we received the aforementioned output.

Changing The Value Of Enum

Let’s assign a value to the first member of the enum that we defined in our previous example and see what happens:

The user can assign any value as per their choice and all the members of the enum will get auto-assigned with the increment of the user-defined values.

Properties in C# are basically the named member of interface, classes, and struct. Properties are an extension of the member variables/method of struct or class. They are used to read, write or change the value of the private fields.

Properties are accessed just like the fields. They have accessors that can be used to get, set and compute the values. We can also put logic while setting values in the properties. It can also be used with the private class which restricts access from outside, but at the same time, it allows the user to use properties for getting or setting values.

Accessors of property constitute the statements that can be used to read, write or compute a given property. The declaration of property can contain get, set or both.

When the above code snippet is successfully compiled and executed, the following output is observed.

In the above example, we have a class “Cube” inside which we have declared a “Side” property of type integer. After that, we have get and set property where we have returned and provided the value to the variable side.

We have another class “Program” with the main method inside which we have initialized the Cube class and provided the value for the Side property, and then we have printed the computed result to the console.

Constructors are initialized automatically at the time of class object creation whereas destructors destruct the class and are mainly used to remove the memory allocation after completion of execution. Constructors can be of two types i.e. default and parameterized.

The destructor doesn’t accept any parameter nor does it return any value. Both Constructor and Destructors have names that are exactly the same as the class name. We also learned about static variables and static class and how they can be accessed without using any class instances. We came to know that a static class can only have static members.

We also discussed Structs or structures. The Structs are value type entities and need to be initialized for access.

Enum and properties of C# were also discussed. Enum is a set of named integer constant. Similar to the struct, it is also a value type entity. The enum will have its members and each member will have their own default value.

At the end, we discussed properties, that are an extension of the member variables/method of struct or class. They are used to get, set or change the value of the private fields.