The Using block mainly helps in managing resources, it allows the system to manage its resources by specifying the scope of the object and its resource requirement.

The .Net Framework offers different ways for resource management for objects using a garbage collector. It means that you don’t need to explicitly allocate and remove memory objects. Cleaning operation for any unmanaged object will be handled by using destructor.

To help programmers to achieve this, C# using statement provides a condition for the destruction of the object. 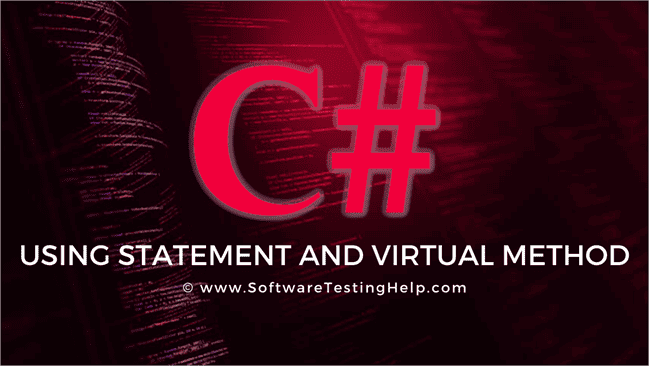 To achieve auto-destruction of the object, C# offers a dispose method that can be called when the object is not required anymore. The using statement in C# defines a conditional boundary for the existence of the object. Once the execution sequence leaves the using boundary, the .Net framework will know that its time to destroy that object.

The C# Using statement allows the programmers to implement several resources in one statement. All the objects defined inside the using code block should implement the IDisposable interface, and this allows the framework to call the dispose methods for the specified objects inside the statement once it is exited.

Using statements can be combined with a type that can implement IDisposable like StreamWriter, StreamReader, etc.

Let’s have a look at a simple program:

The output of the above program:

In the above example, when the program is executed, first the “SysObj” instance is allocated in the memory heap. Then the using block starts executing and prints the output that we defined inside the console. Next, as the Using statement block gets over, the execution is immediately transferred to the dispose method.

Then the code exits the statement block and prints the outside statement to the console.

What Is A Virtual Method?

A virtual method is a class method that offers functionality to the programmer to override a method in the derived class that has the same signature. Virtual methods are mainly used to perform polymorphism in the OOPs environment.

A virtual method can have an implementation in both derived and base classes. It is mainly used when a user needs to have more functionality in the derived class.

What Is The Use Of Virtual Keyword In C#?

The virtual keyword in C# is used to override the base class member in its derived class based on the requirement.

A virtual keyword is used to specify the virtual method in the base class and the method with the same signature that needs to be overridden in the derived class is preceded by override keyword.

Hence, in simple words, the abstract methods don’t have any code inside them whereas the virtual method has its own implementation.

Difference Between Virtual And Override In C#

Is It Mandatory To Override Virtual Method In C#?

Let’s have a look at an example to understand more clearly about the virtual methods.

In this example, we will be using two different methods in the base class, the first one is a non-virtual method and the other one is a virtual method with the virtual keyword. Both these methods will be overridden in the derived class.

Let us have a look:

The output of the above program is:

In another class “Program” we create an entry point to create an instance of the derived class Calculate and then we assign the same instance to the instance object of the base class.