This tutorial explains the Var, LINQ and Ternary Operator in C# with syntax, usage and programming examples:

C# is a strongly typed language i.e. we need to declare a variable before we can use it anywhere in the program. But let’s assume a scenario where we don’t know what variable type we will be needing in the next step of the program.

To handle these types of scenarios, C# allows the user to declare variables without providing any explicit data types to them. This can be achieved by declaring a “var” type variable. 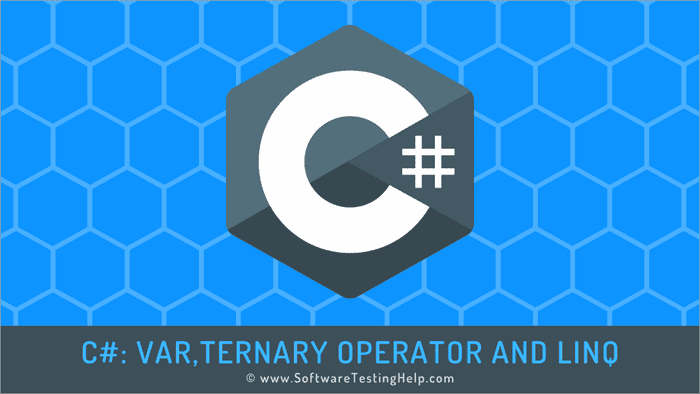 Here we defined 3 different variables – integerData, booleanData and stringData with “var” data type. Then we have assigned values of different data types to each of these variables. Now if we print this to the console, then we will get the output of all the assigned value.

Let’s assume that we have an ArrayList that we want to access. If we don’t have any idea about the data type of the array list then using a var variable can be quite useful. It can also be helpful if the array list comprises of multiple data types.

We created an ArrayList with 4 values 1, 2, 3, and 4. As already mentioned, if we don’t know the data types present in the Array list then we can use a “var” in the foreach loop to access any data type it may contain.

So, each variable will be assigned data types at the time of value assignment. This is also useful if the array contains multiple data type values.

Similar to the other data types and keywords var also has its fair share of restrictions. Let’s have a look at some of the constraints for the var keyword.

Summary Of The C# var Keyword

Enlisted below are some of the most important facts about var keyword that we all need to keep in mind while using it:

A ternary operator helps the programmers to execute statements based on some predefined conditions by using the  decision-making operator syntax “?:”.

Syntax Of The Ternary Operator

As seen in the above syntax, the ternary operator is composed of three parts. The first part contains a conditional expression that will return a Boolean value i.e. True or false.

The point to keep in mind is that the ternary operator only returns the value contained in the second and third parts it does not execute the expressions.

Let’s look at the following example to see how a conditional operator works:

The comparison result: b is greater than a

Let’s see an example to standard nested ternary more clearly. For example, we will discuss how we can use a single line of code of the ternary operator instead of using a large if-else-if statement block.

The comparison result: a is equal to b

If we look at the above example we will be able to see that instead of writing multiple if-else statements we have written a single nested ternary operator that gives the same result as multiple statements are written above that.

Summary Of The Ternary Operator

A language integrated query or LINQ was introduced in .net Framework 3.5. It helps in querying data from different data collectors such as a database is collections etc. Based on the user requirements.

It’s integrated with both C Sharp and VB, thereby helping in removing the conflict between the different programming languages and databases at the same time, thereby providing a single language query for different data sources.

For example, we can use a LINQ to retrieve unsaved data from the database similar to SQL Query. We can help programmers to access and save data from different data sources like SQL Server, XML document, collections, etc.

Before we start performing operations using LINQ, we need to import the system.Linq namespace in our application.

We can perform LINQ operations in two ways:

Using LINQ we can perform different querying operations using the query syntax. It is quite different from SQL and it requires us to follow the syntax hierarchy as shown below.

The hierarchy for the sentence is given in the following order.

From, in, let, where, order by, select, group by, into

Let’s have a look at an example, to understand the usage of query syntax more clearly.

In this example, we defined an integer type array with some test data. Then we used a var type variable to store the result of the LINQ query. Later we used a foreach loop to print all the content of the result.

The above example shows us how to use the LINQ query syntax in our program.

The method syntax uses the extension method of the Enumerable class. Method Syntax is quite different from query syntax.

Given below is an example to see how Method Syntax works.

Here, have an integer type array with some integer data. Then we ran the method query on the integer array. We used a foreach loop to retrieve the data from the result of the query. This gives us the result based on the condition we provided in the method syntax.

We learned that LINQ is an integrated query language that was introduced into the .Net framework.

It offers a solution to query different data sources such as XML documents collections SQL databases etc. It can be used with both C Sharp and VB.net.