This article has been brought to you to discuss a special type of software testing which is very important for the business.

We will discuss the basics of configuration testing, its need, importance, goals, and types. As we will progress further in the article, we will learn in detail how to perform this testing.

This tutorial will give you a complete overview of Configuration Testing and it will act as a perfect guide to anyone who is new to this testing concept and brush up the knowledge of those who already have experience in it. 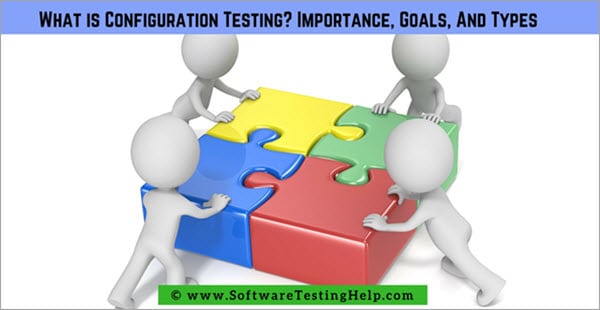 What is Configuration Testing?

Configuration testing is a method of testing a system under development on multiple machines that have different combinations or configurations of hardware and software. The performance of the system or an application is tested against each of the supported hardware & software configurations. 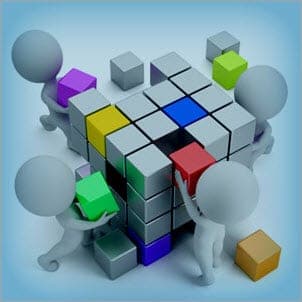 As discussed above, this testing is a technique that assesses the performance of a software, system/application considering the different system configurations.

This testing is done to determine the optimal configurations under which a system or an application can work fine without any bugs, issues or flaws in performance. So, the most efficacious configuration that will deliver the required performance characteristics is spotted with the help of this testing.

The second main reason for this testing is to verify the system’s compatibility with the other software or equipment signified in the SRS (software requirement specification).

Let’s consider that your enterprise has developed a desktop application in C# language and this app is built on the .NET framework.

And this app is based on a 3-tier architecture which has three layers – front end (client), the application layer (server) and the database layer. Each of the layers will support certain platforms accordingly.

Let’s assume that each layer supports the below platforms: 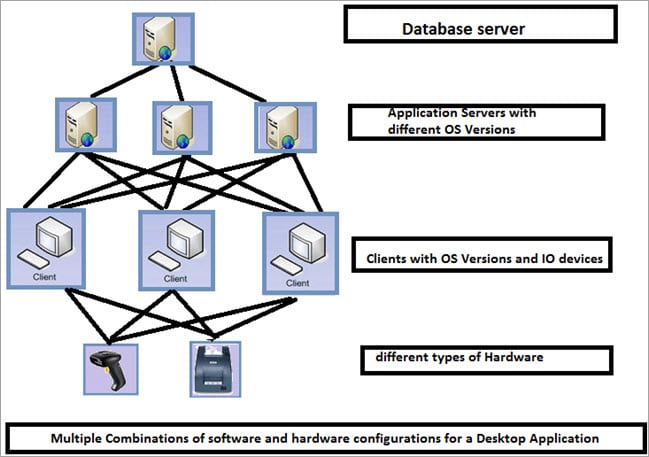 And, so on until you test all the possible configurations.

Our testing would not only be restricted to the software, but it will also cover the hardware, where we will have to check each of the combinations of various hardware devices. Therefore, at times this testing is also referred as Hardware Configuration Testing.

This testing has certain pre-requisites that need to be fulfilled before we execute the configuration tests.

Below are the prerequisites:

Owing to a huge number of possible hardware & software configurations, it becomes very time-consuming and almost impossible to test each of the configurations effectively.

For Instance, in the example that we discussed above, we will have a total of 3*3*3 i.e. 27 software configurations. And, let’s suppose we have 5 different hard drives and 6 different memory sizes. Then, the count will go to 27*5*9 i.e. 810 configurations now.

This will keep on increasing if we add more components to the picture. So, it becomes crucial to do the planning for the software testing effort and identify clearly that which platforms will be supported. 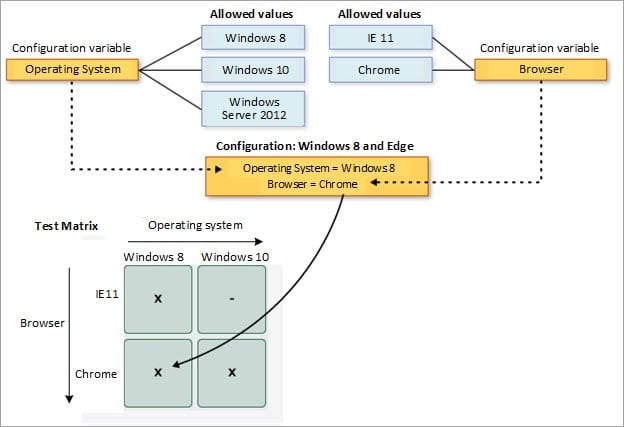 The above figure shows a sample schematic matrix of configurations that you would wish to test.

This step is required because it is impossible to test the whole huge wide range of configurations. So, based on the client feedback, the most critical configurations are enlisted, and they are to be thoroughly tested first.

Once, we are done with the above two steps, we can go ahead with testing the various configurations based on their priority.

Microsoft Visual Studio Team Services (VSTS) is a tool which greatly helps in testing your app under various configurations based on your test plan.

You can follow the below steps to perform this testing:

#1) Set up the configurations and create the variables. A variable is one of the components in your configuration.

For Example, there can be a variable ‘Browser’ which can have multiple values like Chrome, Firefox, IE10, etc.

#2) Assign the configurations to the test plans/test suites or individual test cases.

#3) Execute the tests against each configuration.

#4) Track the test results for each of the configurations.

A detailed step by step guide to perform this testing with VSTS can be viewed here: VSTS – Test different configurations

Given below are the various goals of this Testing:

We can have two different lines of divisions for this testing.

On the first line, it can be divided into two parts:

On the second line, it can again be divided into two parts – 1. Client level testing & 2. Server level Testing

To start with let’s see about hardware and software configuration.

This testing is done over the AUT (application under test) with multiple OS versions, software updates, etc. This is a long-winded testing as it consumes a huge time to install and uninstall the various software which are to be used for testing.

One approach to save the time is to employ virtual machines for testing the software configuration. A VM simulates the real-time configurations and gives the same feel as of a physical machine.

So, instead of installing and uninstalling the multiple software on a single physical machine, we can have multiple virtual machines simulating each different configuration against which we need to do the testing.

Software configuration testing begins once the build is released after passing through the unit test and integration test.

Hardware configuration testing is usually carried out in labs, where we have physical machines with various hardware connected to them.

Every time a build is released, the software is required to be installed in all the physical machines to which the hardware is attached, and the test suite is required to be executed on each and every machine to confirm that the application is working fine.

To accomplish the above-stated task, a significant amount of effort is required to set up the software on each machine, connect the hardware to it and then manually execute the test suites. Even if we automate this task and run the test suite, even then a significant effort would be required.

Also, as we have already discussed in the former part of this article, whilst doing hardware configuration test, we spell out the kind of hardware to be tested, and there are numerous computer hardware and peripherals which make it next to impossible to execute all the tests.

So, a tester analyzes that which hardware is mainly used by the customer and then conducts the testing based on the prioritization.

#1) Client level testing: It has a commonality with usability and functionality testing. This testing is done from the point of view of its direct user’s interests.

#2) Server level testing: This type of testing is done to investigate the interaction between the software and the external environment when it is planned to be integrated post-release.

Importance of this Testing for an Enterprise

This testing is very important for an enterprise to come up and sustain with high performing, scalable and available applications.

This testing should be performed in a continuing and preferably an automated manner (otherwise it is very time consuming when done manually) with the intention of quickly identifying and correcting the factors that contribute to inefficiencies.

Configuration testing is as important as any other software testing type as it discovers the optimal configuration of the system under which the application performs at its best. Also, it helps in identifying and rectifying any compatibility issues.

Hope, this article was informative and would have brought you a fair idea about configuration testing.